The United States has begun three days of tributes to Supreme Court Justice Ruth Bader Ginsburg today, as pallbearers carried her flag-draped coffin into the white marble court building and members of the public lined up to pay their respects.

Wearing dark suits and black face masks due to the coronavirus pandemic, dozens of the liberal icon's former clerks stood at attention as the coffin was carried up the court's broad steps and into the Great Hall, where a private ceremony was planned for friends and family. 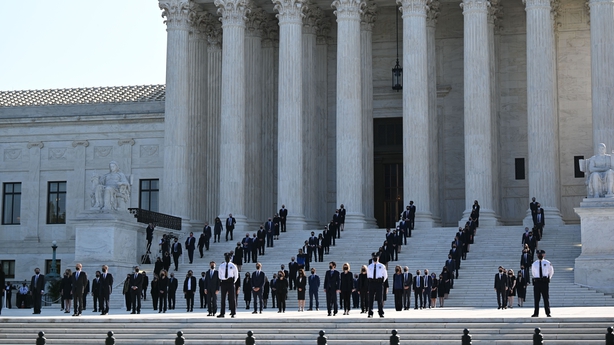 Members of the public watched from behind barricades as they awaited a public viewing due to start at 11am local time (4pm Irish time).

Justice Ginsburg, who over the course of her long legal career championed gender equality and other liberal causes, in recent years became something of a pop icon for the American left.

After two days of public viewing under the neoclassical court building's massive Corinthian columns, Justice Ginsburg will on Friday become the first woman to lie in state in the US Capitol when her casket is placed in National Statuary Hall. 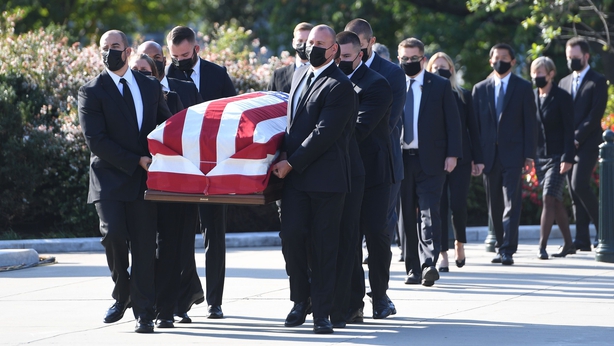 Civil rights pioneer Rosa Parks was also mourned at the Capitol in a similar ceremony in 2005, but as someone who did not hold government or military office, she lay "in honor," not "in state."

Both historic events for Justice Ginsburg, however, come with modifications due to the coronavirus pandemic.

US House of Representatives Speaker Nancy Pelosi said that, due to the pandemic, a formal ceremony to be held on Friday morning will be limited to invited guests only.

At the courthouse, which remains closed to the public due to the pandemic, the justice will lie in repose under the portico outdoors to allow for public viewing.

Officials said social distancing and face coverings will be required to participate to guard against the spread of the virus.

Flowers and other offerings are forbidden on the court's plaza or its great flight of steps.

The justices for the first time in the court's history heard oral arguments in May by teleconference, and will do so again next month.

Though the building is closed, Justice Ginsburg's courtroom chair and the bench in front of it have been draped with black wool crepe to mark the occasion, a tradition that dates back at least to 1873. A black drape has also been hung over the courtroom doors.

Inside the courthouse, the coffin was due to be moved on to the Lincoln catafalque, a pine board platform draped in black cloth that was used to support President Abraham Lincoln's coffin when he lay in state in the Capitol's Rotunda after his assassination in 1865.

The catafalque was loaned to the court by the US Congress for the ceremony. A 2016 portrait Justice Ginsburg by Constance P Beaty will be on display in the hall.

A private interment service is planned for next week at Arlington National Cemetery. Justice Ginsburg's husband, Martin Ginsburg, was buried there in 2010. 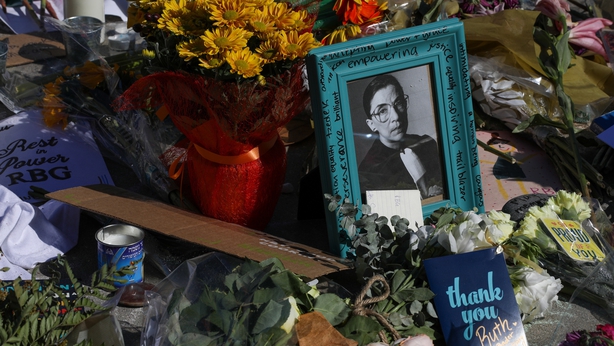 Who does Trump want to replace Ruth Bader Ginsburg?

Her death has opened a crucial Supreme Court seat that Republican President Donald Trump has promised to quickly and controversially fill against the wishes of Democrats.

Mr Trump will announce his pick to replace Ms Ginsburg on Saturday, with Senate Republicans promising a swift vote on the nominee.

Democratic opponents, led by presidential candidate Joe Biden, however, are demanding that the process wait until after the 3 November election, when it will be known whether Mr Trump is getting a second term.

Republicans are ignoring this, giving Mr Trump, who has already replaced two other justices during his presidency, a chance to tilt the nation's highest court to the right for decades to come, whether he beats Mr Biden or not.

Speaking at a campaign rally yesterday in Moon Township, Pennsylvania, Mr Trump said he would reveal his nominee at 5pm local time on Saturday at the White House.

"We're going to pick a great woman," he said to chants of "Fill that seat!" from the crowd.

"We have great support from the Republican Party."

Mr Trump indicated he would hold off on announcing his choice until the end of the week out of respect for the memorial services for Ms Ginsburg. The progressive justice will lie in repose at the Supreme Court today and tomorrow then on Friday will become the first woman to lie in state at the US Capitol.

Mr Trump has pledged to choose a woman to replace Justice Ginsburg for the lifetime post.

Leaders of the Republican majority in the Senate, which is tasked with confirming court nominees, said they had enough support to hold a vote on the nomination either before the election or at worst during the "lame-duck" session between the election and the inauguration of the next president in January.

"We will certainly do that this year," Republican Senate leader Mitch McConnell said.

Although two Republican senators said they believed the upper chamber of Congress should not vote at all before the election, the party's 53-47 majority is still just big enough to go ahead.

One of the other key potential Republican holdouts, frequent Mr Trump critic Mitt Romney said yesterday he would move ahead with the process.

"If the nominee reaches the Senate floor, I intend to vote based upon their qualifications," Mr Romney said.

Mr Trump welcomed what he called a "very positive statement" by Mr Romney, who was the only Republican senator to vote for impeaching the president.

Democrats argue that any Senate vote should be delayed until after the election has made clear who will lead the country from 2021.

They cite the example of 2016 when Democratic president Barack Obama's nominee to replace justice Antonin Scalia months before the election did not even get a hearing in the Republican-controlled Senate.

"Why should the American people trust the Republican senators to do anything they say when they are proving right now that their speeches mean nothing the moment the shoe is on the other foot," the Democratic leader in the Senate, Chuck Schumer, said.

Republicans say that with their control of the White House and the Senate right now, they have the right to fill court seats at any time they wish.

Adding to tensions, there is fear that leaving Ms Ginsburg's seat unfilled - reducing the court to eight justices - raises the possibility of a 4-4 tie in the event of rulings related to election disputes.

Mr Trump's Saturday announcement will set the clock ticking on what is likely to be a contentious fight in Congress as Republicans push to get the nominee confirmed at an unusually quick pace.

White House spokeswoman Kayleigh McEnany told reporters "we certainly believe we can" get the entire approval process done ahead of the election.

Although Democrats have no way of stopping the procedure, they will seek to inflict political pain on the Republicans over what Mr Biden called an "abuse of power".

As the battle lines were drawn over the court, Cindy McCain, the widow of the late senator John McCain, a Republican but frequent Trump opponent, threw her support behind Mr Biden.

"My husband John lived by a code: country first," she said in a statement. "We are Republicans, yes, but Americans foremost.

"There's only one candidate in this race that stands up for our values as a nation, and that is Joe Biden," she said. "I'll be putting our country first and voting for Joe Biden."