US President Donald Trump threatened to stop looters in Minneapolis with deadly military force, after that city weathered a third night of arson and rioting over the police killing of an unarmed black man.

Some congressional Democrats denounced as racist Mr Trump's Twitter threat, which called the looters "THUGS" and warned "when the looting starts, the shooting starts."

Twitter, for the first time, hid the tweet from Mr Trump behind a warning banner that accused the president of "glorifying violence."

He relies heavily on Twitter to bring his message directly to his 80 million followers on the site, but also has repeatedly accused it and other social media sites of censuring conservatives.

Mr Trump, a Republican who is running for re-election in November, has a history of inflaming racial tensions.

He blamed "both sides" for violence between white supremacists and left-wing counter protesters in Charlottesville, Virginia, in 2017 and has called illegal immigrants crossing the US-Mexico border rapists.

Twitter is doing nothing about all of the lies & propaganda being put out by China or the Radical Left Democrat Party. They have targeted Republicans, Conservatives & the President of the United States. Section 230 should be revoked by Congress. Until then, it will be regulated!

His early morning tweet suggested that security forces would open fire on looters to curtail unrest over the death of George Floyd, a black man seen on video gasping for breath while a white police officer knelt on his neck.

Protests over his death and other killings like it have spread to cities including Los Angeles and Denver, with a protest expected in New York on Friday.

Mr Trump said in his tweet: "These THUGS are dishonoring the memory of George Floyd, and I won't let that happen. Just spoke to Governor Tim Walz and told him that the Military is with him all the way. Any difficulty and we will assume control but, when the looting starts, the shooting starts. Thank you!"

The phrase about shooting dates back to US police crackdowns on civil rights in the 1960s.

We have placed a public interest notice on this Tweet from @realdonaldtrump. https://t.co/6RHX56G2zt

"He is calling for violence against American citizens during a moment of pain for so many. I'm furious, and you should be too," Democratic presidential candidate and former Vice President Joe Biden said in a tweet.

US Representative Rashida Tlaib, one of the most liberal voices in Congress, took a harsher tone: "The Impeached President is a violent white supremacist."

Mr Trump issued his tweet amid days of turmoil in Minneapolis, which was engulfed in a third night of arson, looting and vandalism as protesters vented their rage over Mr Floyd's death.

Four police officers involved in Mr Floyd's death have been fired and the FBI is investigating. Mr Trump has condemned the killing and promised justice.

His re-election campaign has identified Minnesota as a state he could win in 2020 after narrowly losing it in 2016.

Twitter's decision to attach a warning to Trump's tweet escalates a feud between Mr Trump and tech companies.

Mr Trump threatened new regulation on internet companies and called on Congress to revoke a law, known as Section 230, that protects online platforms from lawsuits over content.

A Twitter spokeswoman said CEO Jack Dorsey had been informed of the decision to hide Mr Trump's tweet before the label was applied.

The decision was based on a policy introduced in June 2019, which the company said it applied to a Brazilian cabinet member's tweet in April.

Mr Floyd's death was one of several recent killings of black people in the United States that has provoked outrage.

The Minneapolis night sky was lit up with flame from a police precinct that had been torched overnight.

Riot police in gas masks arrested a CNN crew on live TV, leading them away in handcuffs from streets that resembled a warzone. More than an hour later, the crew was released.

Protests took place in other US cities, including Louisville, Kentucky, where police said seven people were shot.

Protesters there vented rage over the police killing of Breonna Taylor, a black woman shot in her apartment in March. 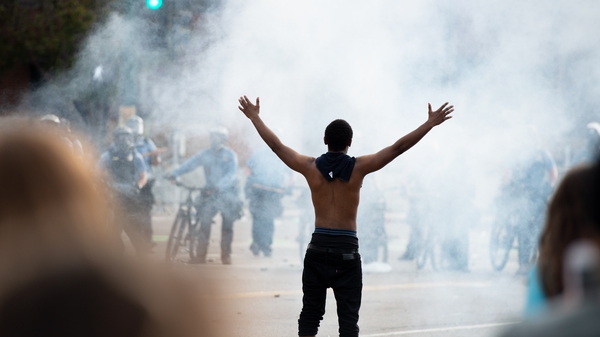