US President Donald has celebrated his acquittal on impeachment charges with a speech that drew on White House pomp to underscore the fact that he remained in office.

After walking down a red carpet to a standing ovation from scores of Republicans, administration officials and conservative media figures in the White House, Mr Trump re-aired old grievances and accused Democrats of staging a "corrupt" effort to undermine his presidency.

"I've done things wrong in my life, I will admit... but this is what the end result is," Mr Trump said, holding up a copy of the Washington Post with the headline "Trump acquitted".

The Republican-controlled Senate on Wednesday voted to acquit Mr Trump on charges brought by the Democratic-led House of Representatives.

The acquittal was Mr Trump's biggest victory yet over his Democratic enemies in Congress, who attacked Senate Republicans for refusing to call witnesses or seek new evidence at the trial. 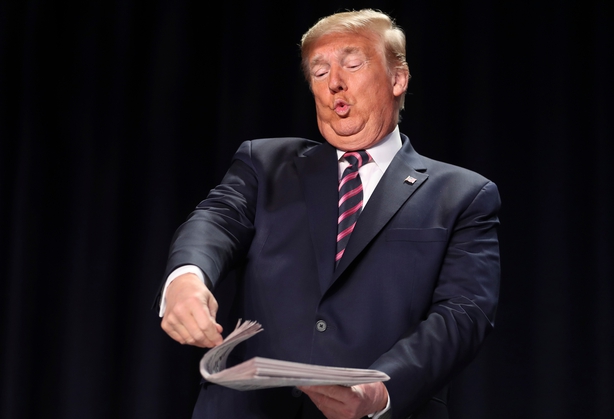 Earlier, Mr Trump, who has strong support from evangelical Christians and conservative Catholics, criticised some of his opponents for invoking their religious faith during the impeachment battle. Mr Trump did not mention anyone by name.

House Speaker Nancy Pelosi, a Catholic who launched the impeachment inquiry in September, said in December that she does not hate Mr Trump and that she prays for him.

Republican Senator Mitt Romney, a Mormon, cited his religious faith when he voted to convict Mr Trump on a charge of abuse of power on Wednesday.

Mr Romney was the only Republican to vote for conviction. No Democrat voted to acquit.

"I don't like people who use their faith as justification for doing what they know is wrong. Nor do I like people who say 'I pray for you,' when they know that that's not so," Mr Trump told the annual National Prayer Breakfast in Washington.

He avoided greeting Ms Pelosi, who sat steps away on the other side of the platform. She said later that Mr Trump's comments were inappropriate, especially at a prayer breakfast.

"He's talking about things he knows little about - faith and prayer," she told a news conference.

Asked if House Democrats could still work with the White House following impeachment, she said: "That would be up to him. It certainly hasn't changed in terms of us."

Had failed presidential candidate @MittRomney devoted the same energy and anger to defeating a faltering Barack Obama as he sanctimoniously does to me, he could have won the election. Read the Transcripts!

Senate Republicans voted to acquit Mr Trump of abuse of power for pressing Ukraine to investigate political rival Joe Biden, a contender to be the Democratic nominee in November's presidential election, and of obstructing a congressional investigation of the matter.

Democrats were uncertain about their next steps in investigating Mr Trump.

There are several pending court cases related to Democratic efforts to get more information from him, and Ms Pelosi issued a statement saying the House would protect the Constitution "both in the courts of law and in the court of public opinion".

US President @realDonaldTrump holds up a copy of @USATODAY with the headline "Acquitted" at the National Prayer Breakfast in Washington. #Impeachment @rtenews pic.twitter.com/HrmLopTIzq

But Democrats would not say whether they would subpoena John Bolton, Mr Trump's former national security adviser, to testify to House committees.

Democrats have expressed concern an acquittal would encourage a president who already challenges political norms, painting him as a threat to US democracy and a demagogue who has acted lawlessly.

There are 11 Democrats vying for the right to challenge Mr Trump in November, but he heads into the campaign with the advantages of a powerful fundraising machine and near universal support from Republicans.