The US Senate has acquitted President Donald Trump of abuse of power and obstruction of Congress following a historic two-week impeachment trial.

He was cleared on the abuse of power charge by 52 votes to 48 and by 53 votes to 47 on the charge of obstruction of Congress.

Republicans hold a 53-47 majority in the Senate and a two-thirds majority (or 67 senators) is needed to remove a president from office.

Republican Senator Mitt Romney of Utah was the only Republican who voted to convict Mr Trump on abuse of power.

He sided with the Republican majority on the obstruction of Congress charge.

Mr Trump was impeached by the Democratic-controlled House of Representatives on 18 December for withholding military aid to Ukraine to pressure Kiev to investigate his potential November election rival Joe Biden. 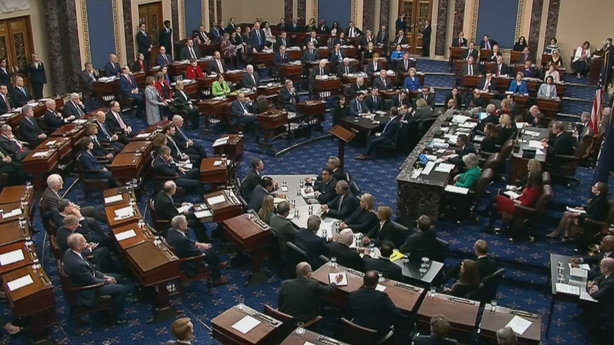 The businessman-turned-politician, 73, survived only the third presidential impeachment trial in US history, just like the two other impeached presidents, Bill Clinton and Andrew Johnson.

A conviction on either count would have elevated Vice President Mike Pence into the presidency.

On each of the two charges, the senators voted one by one on the Senate floor with US Chief Justice John Roberts presiding.

Earlier, Mr Romney said President Trump was guilty of an "appalling abuse of public trust", as he said he would vote to convict him.

"Corrupting an election to keep one's self in office is perhaps the most abusive and destructive violation of one's oath of office that I can imagine," the 2012 Republican presidential candidate said.

"The president is guilty of an appalling abuse of public trust," he said in a sombre speech on the Senate floor just hours ahead of the historic vote.

I will be making a public statement tomorrow at 12:00pm from the @WhiteHouse to discuss our Country's VICTORY on the Impeachment Hoax!

Mr Romney said it was the "most difficult decision I have ever faced" and he expected he would come in for harsh criticism from fellow Republicans.

"I'm aware that there are people in my party ... who will strenuously disapprove of my decision, and in some quarters I will be vehemently denounced," he said.

But he said it was a matter of conscience and in accordance with his Mormon faith.

"As a senator juror, I swore an oath before God to exercise impartial justice," he said.

"With my vote, I will tell my children and their children that I did my duty to the best of my ability," Mr Romney said.

The Chief Justice of the Supreme Court formally announces that @realDonaldTrump has been acquitted of the two #impeachment charges against him. @rtenews pic.twitter.com/19uUiPANdn