US President Donald Trump has snapped back at the Danish Prime Minister's "nasty" dismissal of his attempts to purchase Greenland.

His comments heightened a row that has already prompted the US President to scrap a state visit.

Hours after announcing he would not visit Copenhagen next month as planned, Mr Trump accused Prime Minister Mette Frederiksen of insulting the United States as a whole by rejecting talk of buying Greenland as "absurd".

With Ms Frederiksen voicing her annoyance at Mr Trump's cancellation, the war of words marks another spat between the US and one of its traditional allies since Mr Trump came to power two years ago on an avowedly "America First" foreign policy platform.

Mr Trump, who made his name as a New York property mogul, has characterised his idea of buying Greenland as essentially "a large real estate" deal, arguing it is a burden on Denmark as the autonomous territory's economy depends heavily on subsidies from Copenhagen.

Speaking to reporters at the White House, Mr Trump said he was not the first US president to have raised the idea of buying the vast Arctic island, which has housed an American air base since even before it became formally a part of Denmark.

"It was not a nice statement the way she blew me off. We've done a lot for Denmark ... She said absurd. That's not the right word to use.

"It was not a nice way of doing it. She could have just said no, we'd rather not do it.

"She's not talking to me, she's talking to the United States of America."

The idea of the US buying Greenland was initially dismissed as a joke by some, but its strategic location has grown at a time when both Russia and China are flexing their muscles.

Greenland was a Danish colony until 1953, when it became part of the Danish Realm, and it gained "autonomous territory" status in 1979.

The government of Greenland has insisted that the island is "not for sale" and Ms Frederiksen told reporters this afternoon that she fully endorsed that view.

"I am both annoyed and surprised that the US president has cancelled a state visit," said the prime minister who had been preparing to host Mr Trump early next month.

But, she added, "Denmark and the US are not in crisis, the US is one of our closest allies" and the invitation to visit was still open.

The postponement of Mr Trump's visit, which was announced on Twitter, has sparked strong reactions in Denmark.

Denmark is a very special country with incredible people, but based on Prime Minister Mette Frederiksen's comments, that she would have no interest in discussing the purchase of Greenland, I will be postponing our meeting scheduled in two weeks for another time....

"Reality transcends imagination ... this man is unpredictable," said Morten Ostergaard of the Social Liberal Party, which is part of the ruling coalition.

"For no reason, Trump assumes that (an autonomous) part of our country is for sale. Then insultingly cancels visit that everybody was preparing for," tweeted Rasmus Jarlov, a member of the opposition Conservative Party.

"Are parts of the US for sale? Alaska? Please show more respect."

"Mette Frederiksen has been given the opportunity to emphasize that Greenland's big affairs are in fact decided in Copenhagen ... strengthening Denmark's position in this great strategic game at stake over the Arctic," it said. 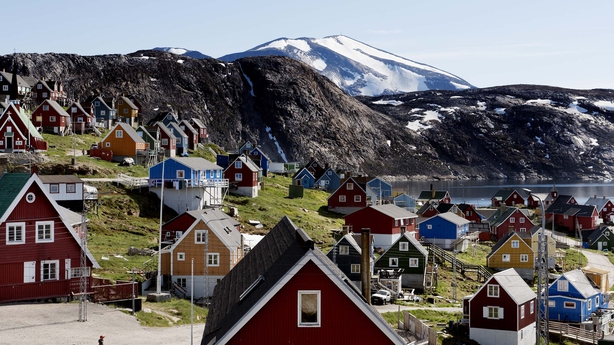 The territory is home to the US airbase Thule, crucial during the Cold War as a first line of monitoring against a potential Russian attack.

But the melting polar ice sheet is opening up potentially major shipping routes, and untapped reserved of oil, gas and minerals will become increasingly accessible, leading Russia and China to show mounting interest in the region.

As far back as 1867, the US State Department expressed interest in the island.

In 1946, President Harry S Truman offered $100 million in gold, or parts of Alaska, in exchange for Greenland.