A white nationalist rally in the heart of Washington drew two dozen demonstrators and thousands of chanting counter-protesters, on the anniversary of racially charged violence in Charlottesville, Virginia.

A large police presence kept the two sides separated in Lafayette Square, in front of the White House.

After two hours and a few speeches, the "Unite the Right 2" rally ended early when it began to rain and two police vans took the demonstrators back to Virginia.

The events, while tense at times, were a far cry from the street brawls that broke out in Charlottesville a year ago, when a local woman was killed by a man who drove his car into a crowd of counter protesters.

"Unite the Right 2" had been denied a permit in Charlottesville this year, but did secure one for Washington. Organisers had planned for up to 400 protesters.

At the head of the white nationalist group was Virginia activist Jason Kessler, who helped organise last year's event in Charlottesville.

He emerged with a handful of fellow demonstrators from a subway station holding an American flag and walked toward the White House ringed by police, while counter protesters taunted the group and called them Nazis.

Dan Haught, a 54-year-old computer programmer from Washington, was attending his first protest at the White House holding a sign that said "Back under your rocks you Nazi clowns".

"We wanted to send a message to the world that we vastly outnumber them," Mr Haught said.

Police said that as of 6pm local time they had made no arrests and would not give a crowd estimate. Late in the day, a small group of counter protesters clashed with police in downtown Washington. 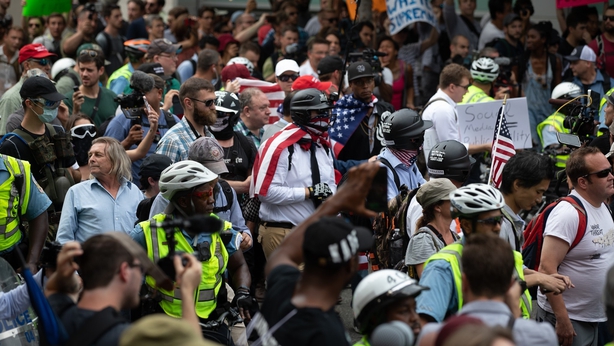 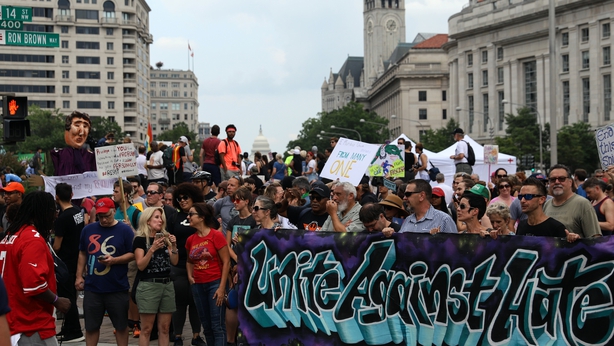 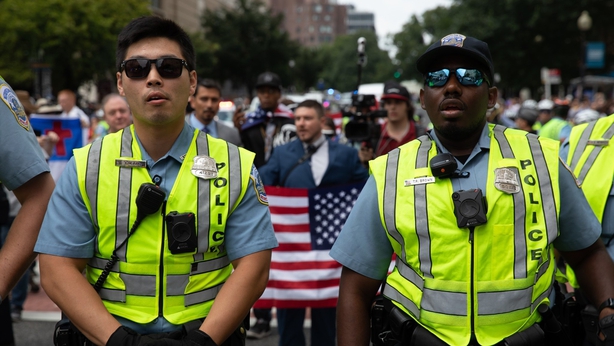 The violence last year in Charlottesville, sparked by white nationalists' outrage over a plan to remove a Confederate general's statue, convulsed the nation and sparked condemnation across the political spectrum.

It also was one of the lowest moments of President Donald Trump's first year in office.

At the time, Mr Trump said there were "very fine people" on both sides, spurring criticism that he was equating the counter-protesters with the rally attendees, who included neo-Nazis and other white supremacists.

The riots in Charlottesville a year ago resulted in senseless death and division. We must come together as a nation. I condemn all types of racism and acts of violence. Peace to ALL Americans!

Mr Kessler said yesterday's rally was aimed at advocating for "free speech for everybody," and he blamed last year's violence in Charlottesville on other groups and the media. He thought the rally went well in comparison.

"Everybody got the ability to speak and I think that was a major improvement over Charlottesville," Mr Kessler told Reuters."It was a precedent that had to be set. It was more important than anything."

The counter-protest, which began earlier in the day was a smattering of diverse groups, from black-clad anti-fascists, to supporters of the Black Lives Matter movement to families who brought children in strollers.

Tourists took pictures and both protesters and observers zoomed around on electric scooters.

In the picturesque college town of Charlottesville, hundreds of police officers had maintained a security perimeter around the normally bustling downtown district throughout the day on Saturday.

Vehicular traffic was barred from an area of more than 15 city blocks, while pedestrians were allowed access at two checkpoints where officers examined bags for weapons.

Hundreds of students and activists took to the streets on Saturday evening.

Many of the protesters directed their anger at the heavy police presence, with chants such as "cops and Klan go hand in hand," a year after police were harshly criticised for their failure to prevent the violence.