At least one person was killed and 34 others injured in Charlottesville, Virginia, when white nationalists protesting against plans to remove the statue of a Confederate general clashed with counter-demonstrators and a car ploughed into a crowd, officials said.

The clashes prompted the governor to declare a state of emergency and halt the rally.

The driver of the car has been taken into custody, USA Today reported, citing the state's secretary of public safety.

"I am heartbroken that a life has been lost here," Charlottesville Mayor Mike Singer said on his Twitter feed. "I urge all people of good will - go home." 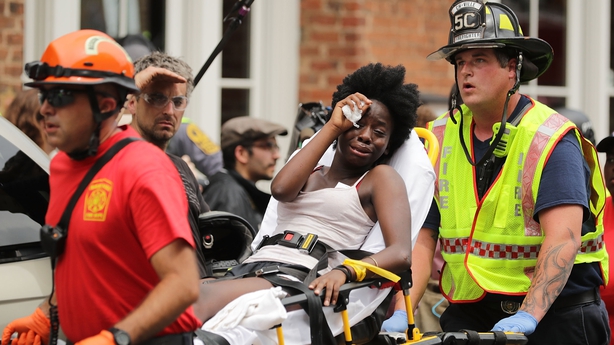 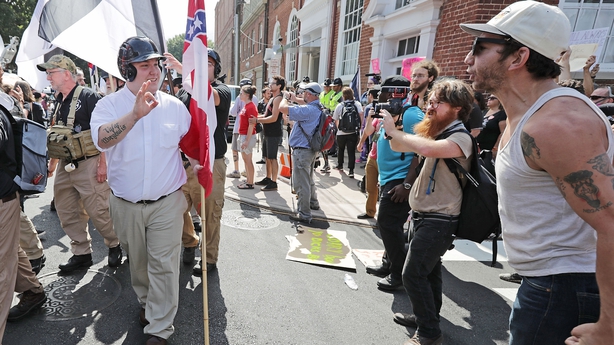 Videos on social media and photographs showed a car slamming into a large group of what appeared to be counter-protesters, sending people flying into the air.

The University of Virginia Health Systems received 20 patients from the scene near the car strike. One of those people died and 19 were being treated, a spokeswoman said without offering details on the injuries.

The City of Charlottesville said a further 15 people were injured at the site of the rally.

"We condemn in the strongest possible terms this egregious display of hatred, bigotry and violence on many sides."

A reporter shouted a question to Mr Trump about whether he had spoken out strongly enough against white nationalists but the president made no comment.

The clashes highlights a resurfacing of the white supremacist movement under the "alt-right" banner after years in the shadow of mainstream American politics.

"You will not erase us," chanted a crowd of white nationalists, while counter-protesters carried placards that read: "Nazi go home" and "Smash white supremacy".

Tensions in the city intensified when the vehicle ploughed into thecrowd of people gathered in a street two blocks from the park that houses the statue of Robert E Lee, who headed the Confederate army in the American Civil War.

The 'Unite the Right' rally was planned in protest against the removal of Lee's statue from a public park.

The Charlottesville confrontation was a stark reminder of the growing political polarisation that has intensified since Mr Trump's election last year.

A video shown on CNN showed a silver sedan driving at high speed into the crowd before reversing along the same street.

Witnesses said it looked like the driver intended to mow down people. Police have not offered any details on the car incident.

Earlier, Virginia Governor Terry McAuliffe declared a state of emergency in the city, home of the University of Virginia's flagship campus.

The gathering was declared an "unlawful assembly," allowing police to disperse the protesters, and police cleared the park where the rally was to be held.

"I am praying that God help us all," Vice Mayor Wes Bellamy said in an interview with CNN. "We are better than this."