US President Donald Trump has said both sides were to blame in the clashes in Virginia, adding that protesters on the political left violently attacked white nationalists rallying against a decision to remove a Confederate statue.

One woman died and 19 other people were injured when a  suspected Nazi sympathiser drove his car into a crowd of anti-racism protesters.

Mr Trump had been sharply criticised for his initial comments blaming "many sides" for the violence in Charlottesville, but yesterday he had explicitly condemned right-wing racist elements.

Speaking to reporters at Trump Tower in New York this evening, Mr Trump said that there are two sides to a story.

"What about the alt-left that came charging at, as you say, at the alt-right? (...) There are two sides to a story."

When asked why he waited until yesterday to condemn hate groups present in Charlottesville, Mr Trump said he wanted to be careful not to make a "quick statement" without all the facts.

He called the suspected Nazi sympathizer a "disgrace to himself, his family and this country."

Mr Trump also defended his controversial far-right chief strategist Steve Bannon, saying: "I like Mr Bannon. He's a friend of mine... He is a good man. He is not a racist."

Donald Trump on clashes in Charlottesville, Virginia: 'I think there’s blame on both sides …' https://t.co/Vgh1q9L7Ry pic.twitter.com/4vW3acOOyA David Duke, a former leader of the Ku Klux Klan has praised Mr Trump for his comments.

He tweeted: 'Thank you President Trump for your honesty & courage to tell the truth about #Charlottesville & condemn the leftist terrorists in BLM/Antifa,' referring to Black Lives Matter and anti-facists.

Thank you President Trump for your honesty & courage to tell the truth about #Charlottesville & condemn the leftist terrorists in BLM/Antifa https://t.co/tTESdV4LP0

Meanwhile Republican Representative Ileana Ros-Lehtinen criticised Mr Trump for his comments, she said on Twitter: "Blaming 'both sides' for #Charlottesville?! No. Back to relativism when dealing with KKK, Nazi sympathizers, white supremacists? Just no."

Blaming "both sides" for #Charlottesville?! No. Back to relativism when dealing with KKK, Nazi sympathizers, white supremacists? Just no.

Mr Trump's comments come after the chief executives of Merck, Intel and Under Armour resigned from a White House advisory panel on manufacturing after the president's initial failure to condemn the white supremacist rally.

"America's leaders must honor (sic) our fundamental values by clearly rejecting expressions of hatred, bigotry and group supremacy, which run counter to the American ideal that all men are created equal," Mr Frazier wrote on Twitter in announcing his resignation yesterday.

"As CEO of Merck and as a matter of personal conscience, I feel a responsibility to take a stand against intolerance and extremism."

Mr Trump did not wait long to respond.

"Now that Ken Frazier of Merck Pharma has resigned from President's Manufacturing Council, he will have more time to LOWER RIPOFF DRUG PRICES!" he wrote.

In a later post, Mr Trump accused Merck of being "a leader in higher & higher drug prices while at the same time taking jobs out of the US Bring jobs back & LOWER PRICES."

Several hours later, Under Armour founder and chief executive Kevin Plank also announced he would step down from the panel.

"Under Armour engages in innovation and sports, not politics," he said in a subtly-worded statement.

"I love our country and our company and will continue to focus my efforts on inspiring every person that they can do anything through the power of sport, which promotes unity, diversity and inclusion."

Now that Ken Frazier of Merck Pharma has resigned from President's Manufacturing Council,he will have more time to LOWER RIPOFF DRUG PRICES!

.@Merck Pharma is a leader in higher & higher drug prices while at the same time taking jobs out of the U.S. Bring jobs back & LOWER PRICES!

Earlier this year, Mr Plank had publicly expressed support for Mr Trump in comments which sparked a backlash.

Intel chief Brian Krzanich also announced his departure from the panel in a blunt statement which said he wanted to "call attention to the serious harm our divided political climate is causing to critical issues."

"Politics and political agendas have sidelined the important mission of rebuilding America's manufacturing base," he said in a statement which underlined his "abhorrence" over the violence in Charlottesville.

"I resigned because I want to make progress, while many in Washington seem more concerned with attacking anyone who disagrees with them.

"We should honour - not attack - those who have stood up for equality and other cherished American values. I hope this will change, and I remain willing to serve when it does."

"Racism is evil. And those who cause violence in its name are criminals and thugs, including the KKK, neo-Nazis, white supremacists and other hate groups that are repugnant to everything we hold dear as Americans," he said in nationally televised remarks.

Mr Trump later tweeted that the media were "truly bad people", as the fallout over his Charlottesville reaction continued.

Made additional remarks on Charlottesville and realize once again that the #Fake News Media will never be satisfied...truly bad people!

The Justice Department has begun a civil rights inquiry into the incident, and the driver of the car, a 20-year-old Ohio man who was said to have had a history of neo-Nazi beliefs, has been charged with second-degree murder. 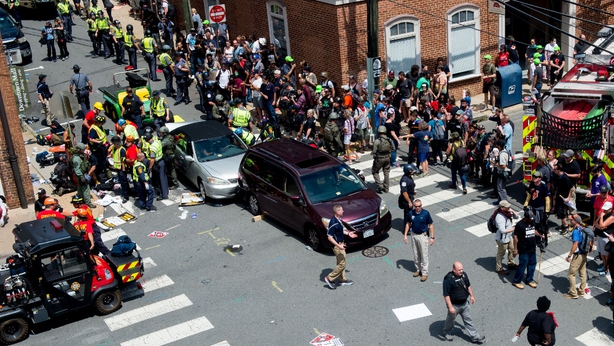 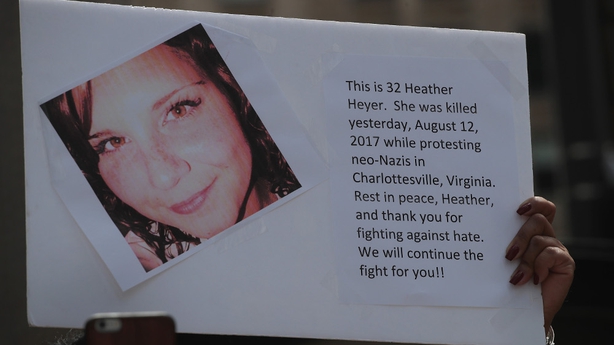 Mr Frazier is a Harvard Law School-trained attorney whose experience includes pro bono work that won the release of a wrongly-convicted death row inmate in Alabama.

He is not the first executive to depart a Trump advisory panel.

But other executives on the panel appear to be staying put.

"Heartbroken by the violence in #Charlottesville. Hate and intolerance are a betrayal of what we stand for as Americans," said Pepsi CEO Indra Nooyi in a statement that did not address the Trump panel.

Other executives, including those from General Electric and Dow, planned to stay on Trump panels, US financial news media reported.