For years we have heard Donald Trump and his supporters chant "build the wall" in reference to his pledge to strengthen security along the border with Mexico.

Last night, there were signs of another wall being rebuilt, the 'blue wall'.

This was a block of three states; Pennsylvania, Wisconsin and Michigan, that were believed to be solidly Democrat back in 2016.

Hillary Clinton was expected to win them and didn't do a lot of campaigning there, but it was a major error.

Donald Trump shattered the 'blue wall'. He unexpectedly won the states by the tiniest of margins and it helped him secure the White House.

Last night, it looked like that blue wall was being reinstated.

US media projected that Joe Biden would win Wisconsin and Michigan, but Donald Trump won't let those prizes go without a fight. 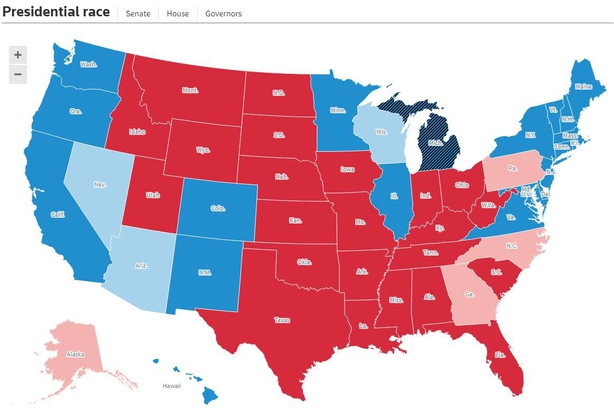 He has demanded a recount in Wisconsin where the result was very tight. He has prematurely declared victory in Pennsylvania, despite the fact that votes are still being counted.

The Trump campaign has launched legal challenges to stop counting in Michigan and Pennsylvania.

The US President is proud of his wall along the Mexico border and touts it as a major success of his first term.

But it is a wall at the other end of the country that he will be far more worried about over the coming days as he fights to retain the White House.