Two teenage boys who died in a Co Derry lough were "a huge gift" and the tragedy has been a nightmare for their families and traumatic for the local community, mourners have heard.

Reuven Simon and Joseph Sebastian, both 16, died after getting into difficulty while swimming at Lough Enagh on Monday evening.

The congregation at their joint funeral service today heard their deaths were "nothing short of unbearable", as the boys' best friends described them as fun, compassionate and inseparable from one another.

The boys were from the city's Indian Keralan community and had been due to return to St Columb's College after receiving their GCSE results last week.

The mass was conducted according to the rites of the Syro-Malabar Church, and incorporated the music and language spoken in the Indian state of Kerala.

Abraham Sebastian, a representative of Joseph's family, described him as "a role model" to his younger siblings and someone "who always took things in his stride".

He said his death was "devastating" and had left "a huge emptiness" in their hearts.

"Words cannot describe the sorrow and loss that we are feeling as a family as we mourn the life that was, but also the life that might have been," he said.

Reuven's brother Evan gave a speech where he addressed his only brother, telling him "you left me too soon".

Reuven's cousin Juliet said he was "the bravest and most selfless person I know".

She added: "He would do anything for his friends and family without a second thought. He was the type of guy to not leave anyone behind."

The boys' best friends described Joseph, whose nickname was Joppu, as "caring, kind and compassionate" with an "unmatchable" sense of humour, and Reuven as a "courageous" and "strong, caring person".

They added: "As best friends, Reuven and Joppu were inseparable."

Their principal Finbar Madden told the congregation that the school had been "overwhelmed" by expressions of condolence from across the community.

He described the boys as outstanding students and said this was "a day of desolation".

He said their form teacher described them as "intellectual, compassionate, inquiring, generous, sometimes mischievous and always open to guidance".

Mr Madden quoted their year head as saying: "Both boys were a gift every day to our school and to the wider community.

"They were loyal to each other and were never separated. They laughed together, worked together and supported one another as best friends should always do." 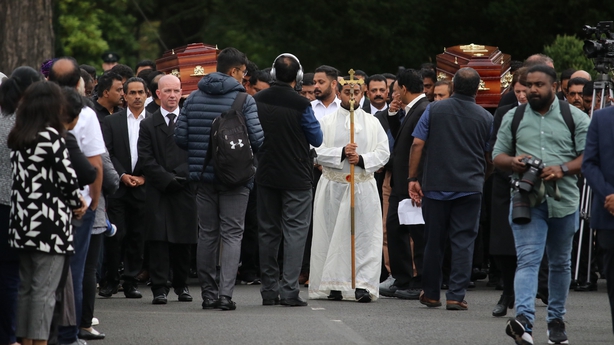 Mourners were told Joseph was "a passionate footballer" and Barcelona supporter, and was also an active member of Newbuildings Cricket Club.

Celebrant Reverend Father Clement Padathiparambil, national co-ordinator of the Syro-Malabar community in Ireland, said the teenagers "were special in so many ways, and it is difficult to understand why their young lives have ended so soon and so suddenly".

In the homily, Fr Michael Canny said the boys' families and the wider community were "troubled" and "bewildered by the sense of loss and the intensity of grief" following their deaths.

"In the eyes of this world you, their families and this community, have lost two young boys at a beautiful time in their lives when they were filled with hopes and dreams," he said.

"Joseph and Reuven's families, you have made this city your home, a city and a people that are no strangers to pain and deep suffering.

"You as families who are suffering so sorely can now draw from that deep well of empathy and love that your adoptive city is so ready and willing to offer."

Bishop of Derry Donal McKeown said the boys were "a huge gift to all of us, as we've heard, during their short lives".

He continued: "Having been a school teacher and principal myself, I know this is a frightening time for many young people and their families.

"This is the worst nightmare for any parent."

Addressing the families, the bishop empathised with "the terrible loss that you have suffered", and said the deaths of the two boys "have been traumatic for many people in this city and community".

He added: "I know that the Syro-Malabar Church community is very strong and close-knit.

"They will work together to support the families, to support the bereaved and the traumatised through the next so difficult weeks, months and years."

Last night, hundreds of people attended a candlelit vigil in Strathfoyle to remember the boys.