Northern Ireland will only move forward when differing identities are respected by all, Arlene Foster said as she resigned from the role of First Minister.

Making her resignation speech to the Assembly chamber, Ms Foster said her time as First Minister may have ended "abruptly", but she vowed to pursue "unfinished business" in championing Northern Ireland in other ways.

Ms Foster, who acknowledged she had not always made the right calls, became emotional as she closed her speech with an appeal for MLAs to act as "good neighbours".

Assembly colleagues applauded as she ended her speech with the line "over and out".

During her speech she addressed the row over the Irish language that threatens to destabilise the powersharing administration in the wake of her resignation.

"We can poke each other in the eye and have a competition of 'my identity is better than yours' but it is only by respecting each other's identity that we will move forward.

"The beauty of the union is that we can all have our identities and live here side by side," she added.

Her remarks come amid an intensifying dispute over the process to replace her.

A stand-off between Sinn Féin and the DUP on the issue of Irish language legislation has the potential to derail the powersharing institutions unless a resolution is found in the coming days.

Ms Foster's formal resignation as joint head of the devolved Executive sets the clock ticking on a seven-day time frame within which the DUP must renominate its chosen successor, Lagan Valley MLA Paul Givan.

However, the joint nature of the office Ms Foster shares with Deputy First Minister Michelle O'Neill of Sinn Féin means Ms O'Neill must also be renominated to her role within those seven days.

If one of the parties fails to renominate within the time period, a properly functioning executive cannot be formed and the UK government assumes a legal responsibility to call a snap Assembly election.

Yesterday, Sinn Féin said it would only engage in the renomination process if it was accompanied by the commencement of legislating for protections for Irish language speakers.

DUP leader Edwin Poots said this morning there could be no preconditions attached to the nomination process. He also said that history will be "kind" to Arlene Foster.

He reiterated that he was committed to implementing all outstanding aspects of the 2020 deal to restore powersharing, including Irish language legislation.

However, he declined to in dicate whether he would move on the language laws in the current Assembly mandate, a Sinn Féin demand, and insisted there were other priorities the Executive should be focusing on, including the health service and economy. 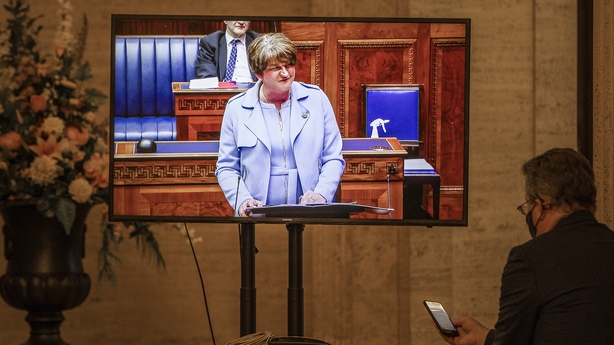 Delivering her personal statement to the Assembly, Ms Foster said: "I have tendered my resignation as First Minister of Northern Ireland, effective from 1pm today.

"Thank you to you and your office for this opportunity to address the chamber one last time ... and I promise not to sing."

She said that colleagues "both inside and outside this House know very well that all periods of leadership must come to an end.

"That is why, when we are privileged and honoured with holding such a position, we must not waste a moment in frivolous brinkmanship but rather forge ahead on behalf of those we represent.

"Whilst I will miss the exchanges from this seat, I am looking forward to fresh challenges."

Ms Foster also referred to the RHI controversy, which led to the collapse of Stormont.

She said: "When faced with false allegations of corruption, I defended myself vigorously to clear my name.

"No-one should have to tolerate such assaults on their character, but misleading interviews and salacious claims that would not survive the glare of an inquiry created a febrile atmosphere that coincided with the declining health of Martin McGuinness.

"The result: a crisis that led to the unnecessary loss of devolution. Lost years for Northern Ireland and a period when public services inevitably slumped backwards."

'If Brussels continue to think that the Protocol is enough, they are in denial' outgoing Northern Ireland First Minister Arlene Foster says, adding 'Northern Ireland is part of the United Kingdom and needs to be treated as such' | https://t.co/zEmO7cx4zm pic.twitter.com/A9ZiTW8pvN

Ms Foster said relations between the UK and Ireland and the UK and EU are "out of balance".

"An imbalance created by the (Northern Ireland) Protocol," she said. "It is not a real partnership. An imbalance and an instability is built in that will fester and deteriorate.

"If Brussels continues to think the protocol is enough, they are in denial.

"Imbalance and instability in the context of Northern Ireland is a truly dangerous cocktail.

"Northern Ireland is part of the United Kingdom and needs to be treated as such," she told the assembly.

Speaking about restoring the Northern Ireland Assembly, she said: "We stood in this chamber and made our commitments to working together, that it was very much a day of hope, that we needed to deliver on power-sharing.

"It needs to be about tackling waiting lists and reforming our health service.

"You cannot build powersharing on broken promises. You must deliver upon agreements that have been made. I'm committed to that. I hope others are committed to doing that." 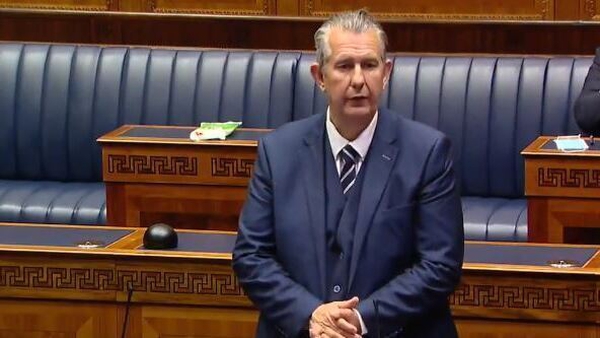 Edwin Poots says history will be 'kind' to Arlene Foster