The Lagan Valley MLA, who entered politics as a researcher for Edwin Poots as a 17-year-old, was expected to be the choice and will take over the role next week.

The new DUP leader has been naming his Stormont ministerial team, who will take up their new roles on
Monday 14 June.

Mr Frew, the MLA for North Antrim and who acted as Mr Poots' campaign manager in the DUP leadership contest, replaces Diane Dodds as Economy Minister.

Ms McIlveen, MLA for Strangford in Co Down, is set to replace Peter Weir as Education Minister.

Gordon Lyons, a current junior minister, was the first of the old guard under Ms Foster to be axed from his role.

He has been named as vice chair of the Health Committee.

Who is Paul Givan? MLA set for top job at Stormont

Revealing Mr Givan as first minister designate, Mr Poots paid tribute to Ms Foster, thanking her for the "excellent work" she had done.

Mr Givan said: "There is a huge responsibility that comes with this position, particularly in serving the people of Northern Ireland."

The ministerial roles will be designate at this stage, with the appointments post-dated to take effect from Monday.

Ms Foster had previously indicated that she will stand down when Mr Poots names a new ministerial team.

But Mr Poots said she will remain as First Minister to lead a British-Irish Council meeting in constituency of Fermanagh on Friday. 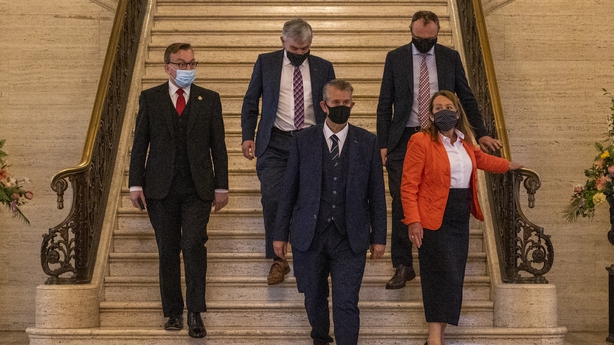 Mr Poots also announced David Hilditch as vice chairman of the infrastructure committee and William Irwin as vice chair of the audit committee.

Pam Cameron will become chairwoman of the assembly and executive review committee.

North Antrim MLA Mervyn Storey has been appointed as chairman of the justice committee and Jonathan Buckley will take up the role as chair of the infrastructure committee.

DUP deputy leader Ms Bradley has been appointed as chairwoman of the Communities Committee and William Humphreys is chairman of the Public Accounts Committee.

The new appointments come as the DUP has been hit by a number of resignations.