The slide happened at Meenbog Wind Farm near Ballybofey, Co Donegal on Friday.

A number of trees were uprooted and moved as a large area of bog was swept into the Mourne Beg river, which flows into the River Derg just across the border in Tyrone.

The company building the wind farm, Invis Energy, has confirmed the slippage happened on its site.

Both rivers affected by the slide are important for Atlantic salmon, which breed and spawn in fresh water.

They are part of what is called the Foyle catchment, a designated EU Special Area of Conservation.

The rivers are today black in colour as a result of suspended peat pollution.

Thousands of salmon spawn in the rivers each year, beginning in mid-November and continuing until January.

They use their tails to make small troughs in loose gravel on the riverbed, into which they then spray their eggs, which need fresh running water to fertilise.

Local anglers fear the peat will cover the gravel, making it impossible for eggs to be laid, as well as reducing oxygen levels in the water.

The Ulster Angling Federation has said it believes all salmon in the Mourne Beg River may have been killed.

It says the extent of damage to fish stocks in the River Derg will become known in the coming days as the water clears and any dead fish can be seen.

"This is potentially an absolute disaster for these rivers," said Gary Irvine of Derg Anglers.

"We won’t know the full extent of the environmental damage for a while yet but it doesn’t look good.

"The water looks heavily polluted and it is the time when the salmon start spawning so the timing could not have been worse." 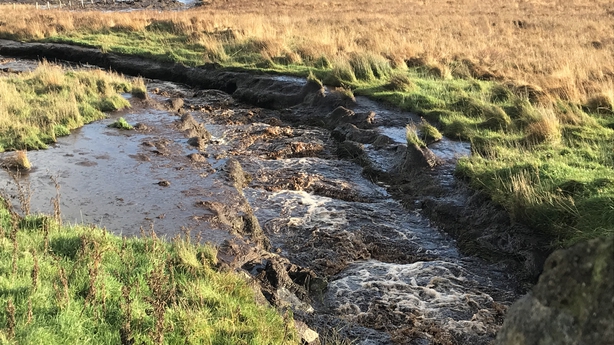 The Loughs Agency, which is investigating the incident, has urged local anglers to report any fish fatalities.

The agency said it was working with Donegal County Council and other statutory bodies.

In a statement, Invis Energy said there is no risk to public health.

It added: "We are working with the relevant authorities to fully address the matter. We are grateful to the local community for their continued support."

Irish Water and Northern Ireland Water have both said there is no risk to the quality of drinking water.

In a statement, Donegal County Council said: "The location of the bog slide is within the site of a wind farm that is under construction.

"The wind farm developer has suspended all works at the site with the exception of those that relate to mitigating the impact of the bog slide and reducing the risk of further slides.

"The multi-agency group will reconvene on Thursday to review matters and further co-ordinate the response."

The issue was raised in the Dáil this afternoon by Independent TD Thomas Pringle, who described it as "catastrophic".

He also called on the Government to review "outdated" guidelines covering the sector.

In response, the Taoiseach said the incident would be "actively investigated".

Micheál Martin said that agencies, including Irish Water and the Environmental Protection Agency and organisations in Northern Ireland, would be involved in the investigation.

Speaking on RTÉ's Drivetime this evening, Mr Pringle said there are fears among local residents that planning permission will be granted for an additional windfarm at the Meenbog Wind Farm.

The granting of permission for the original wind farm "calls into question the entire planning process and how it actually works for the citizens of Ireland", he added.

Deputy Pringle said that many locals expressed concern about the building of the wind farm on land that could be susceptible to slippage.

"I spoke to a local resident on Monday, who actually worked in that area years beforehand and he was aware that basically the bog was just sitting on water. Everybody knew this. But planning permission was still granted.

"This is the fear that people have that regardless of the local motion they put forward, that An Bord Pleanála will grant permission for the new wind farm as well."

In a statement to Drivetime, the Department of Housing said: "Wind farms above a specified threshold are separately classified as strategic infrastructure developments in the Planning and Development Act, 2000 as amended with planning applications in respect of such windfarms, having to be submitted directly to An Bord Pleanála."