Britain's Northern Secretary Julian Smith is meeting with the Tánaiste, Simon Coveney at Stormont tonight, a spokesperson for Mr Smith has said.

It is understood they are considering whether to convene talks later this week in an effort to restore power-sharing.

Abortion will be decriminalised in Northern Ireland after midnight on Monday next.

Unless the power-sharing administation is restored before then, it will fall to the Northern Secretary to decide the termination of pregnancy provisions that will apply after 1 April 2020.

The Assembly has been collapsed for over 1,000 days following the breakdown in relations between the DUP and Sinn Féin.

The move to decriminalise abortion will only be halted if the Stormont executive is restored by 21 October, a prospect that appears remote given the depth of the rift between the DUP and Sinn Féin.

Ms O'Loan, now a peer at the House of Lords, has written a letter to Mr Smith urging him to recall the Assembly before the change to abortion laws comes in next week.

Ms O'Loan described the situation in her letter as "unprecedented". 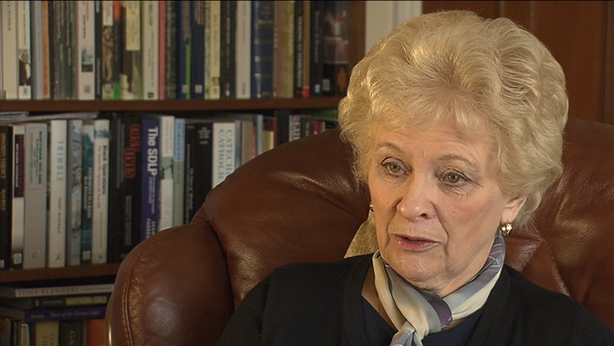 "Our Assembly team met on Monday and agreed to seek a recall of the Assembly," she said. "Our MLAs will return to the chamber without pre-condition.

"There are serious matters emanating from the NI (Executive Formation etc) Act 2019 which should be decisions made in Stormont.

"We urge other MLAs who oppose the extreme liberalisation of our abortion law, to step outside any party shackles and join us in recalling the Assembly.

"It's time to get Northern Ireland moving again."

Arlene Foster's call for the Assembly to sit before Monday is a pointless political stunt.

One of the issues at the heart of the 1,000 day impasse is the Sinn Féin demand for the introduction of an Irish Language Act - a law the DUP has resisted.

If abortion is decriminalised, the British government will take on responsibility for introducing new regulations to provide greater access to abortions in the region by next April.

Anti-abortion activists have urged Stormont politicians to set aside their differences and get back into government to stop the moves to liberalise the abortion laws.

Ms O'Loan described her concerns around the law change in her letter to Mr Smith.

"Despite the recent publication of guidelines there is an enormous lack of clarity about the situation which will prevail between October 22 and the introduction of new regulations," she wrote.

"There are significant legal uncertainties pursuant to the publication of those guidelines, and in the absence of any legal certainty which might derive from properly articulated legislation, they give rise to great concern for the safety of mothers and their unborn babies, and about the absence of any clear statement of the legal rights and obligations of those who might be affected by the guidelines," said Ms O'Loan.

Ms O'Loan served as Northern Ireland Police Ombudsman from 1999-2007, during the reforms recommended by the Patten Commission being implemented, which saw the transition of the RUC into the PSNI.