Hundreds of people have attended a rally in west Belfast to demonstrate support for Gerry Adams and his Sinn Féin colleague Bobby Storey after their homes were attacked by dissident republicans.

The two veteran republicans were hugged and clapped by friends and supporters as they attended the Sinn Féin-organised event.

Crowds gathered at the site of the former Andersonstown Road barracks to show solidarity with the men, cheering loudly when they addressed the crowds and queuing to have pictures taken with them afterwards.

Mr Adams said he was thankful no one had been hurt in Friday night's attacks, which saw explosive devices hurled at his and Mr Storey's homes.

The former party president delivered a stark message to the dissidents as he addressed the crowds.

"You are either for peace or you are against peace," he said.

"And if you feel there is justification in bombing our house or bombing Theresa and Bobby's house or the other incidents that have taken place then step up and explain yourself, justify your actions, stand over what you have done and explain the rationale behind it."

Mr Storey told the rally he was "overwhelmed" by the turn out and said the dissidents would not deflect Sinn Féin's strategy. 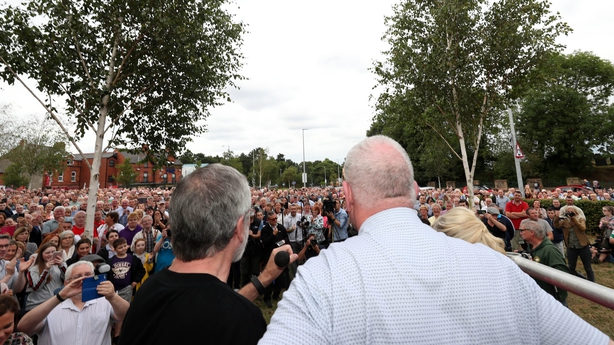 "These people need to go back to wherever they come from," he said.

"You see this despair and frustration that they are taking out in their lack of strategy with everyone else, they need to understand from us - we have been at this a very long time, we are on a particular journey, republicanism is developing across the island, we are on a road to a new and modern and united Ireland and nothing will deflect us.

"We haven't been deflected before and they need to get that message."

The men were joined on the podium by Sinn Féin president Mary Lou McDonald and vice president Michelle O'Neill.

Mrs McDonald branded the dissidents "enemies of the people".