The British Prime Minister has pledged to do everything in his power to bring those responsible for the deaths of 39 migrants found inside a lorry container in Essex to justice.

Boris Johnson was joined by Home Secretary Priti Patel and senior members of the Essex emergency services to pay their respects to the victims at Thurrock Civic Offices in the town where the bodies were discovered last week.

All the dignitaries signed a book of condolence before laying wreaths in the Mulberry garden outside.

The bodies of eight women and 31 men were discovered by police in the refrigerated trailer on the Waterglade Industrial Park in Grays in the early hours of Wednesday last week.

In his message, the Prime Minister wrote: "The whole nation and indeed the world has been shocked by this tragedy and the cruelty of the fate that has been suffered by innocent people who were hoping for a better life in this country.

"We mourn those who lost their lives. Our thoughts are with their families far away. In condemning the callousness of those responsible for this crime, we in the government of the United Kingdom resolve to do everything in our power to bring the perpetrators to justice."

Essex Police say they are working on the largest mass fatality victim identification process in their history.

The visit came on the same day that the driver of the lorry, Maurice Robinson, 25, appeared via video link at Chelmsford Magistrates' Court, charged with 39 counts of manslaughter. 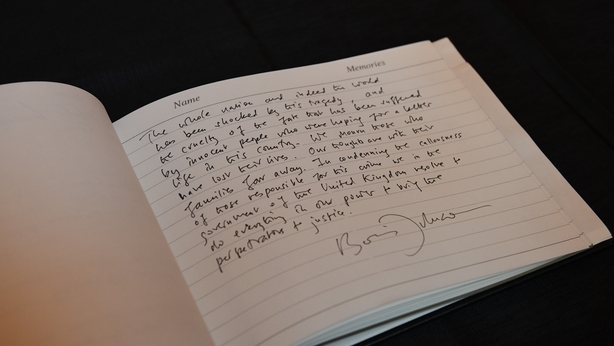 It was initially believed the victims inside the container were Chinese, but dozens of Vietnamese families have since reported missing relatives whom they suspect to be among the dead.

Chinese officials have said they hope the UK can quickly identify the victims.

Mr Chen said the case shows that illegal immigration is a global issue.

"It needs to be jointly dealt with and properly resolved by all parties concerned so that we can prevent a tragedy like this from repeating in the future," Mr Chen said.

The Vietnamese government has said UK authorities have passed on the documents of four of the 39 people found dead in the back of a truck in Essex last week to help determine whether any of them are from Vietnam.

Deputy foreign minister Pham Thanh Son was quoted as saying the documents were handed over to the ministry of public security.

It is not immediately clear what type of documents were sent.

Britain's ambassador met Vietnamese officials to discuss co-operation in the identification of the 39 bodies that were found in a truck in Essex.

Ambassador Gareth Ward said he told Vietnam's Ministry of Public Security that Britain still has not confirmed the identities or nationalities of the victims.

Police initially believed the victims were Chinese, but later acknowledged that details about the bodies were still evolving. Up to two dozen Vietnamese families have since reported missing relatives who they fear to be among the dead.

Mr Ward said the British Government is aware of Vietnamese concern and that he discussed how Britain would work closely with Vietnam on the identification process.