Theresa May has left Downing Street for the final time with a message to her successor as British Prime Minister, Boris Johnson to seek a Brexit agreement.

The new Conservative Party leader has made clear he will leave the European Union on 31 October - "no ifs or buts" - but Mrs May said his priority must be a Brexit "that works for the whole United Kingdom".

Mrs May offered her resignation to Queen Elizabeth today before Mr Johnson had his own audience with the monarch and was appointed prime minister.

Mrs May's farewell speech in Downing Street was interrupted by a cry of "stop Brexit" from a protester outside - in reply she joked "I think not".

But she made clear her desire for Mr Johnson to seek a deal with Brexit, having previously warned about the risks of a no-deal departure. 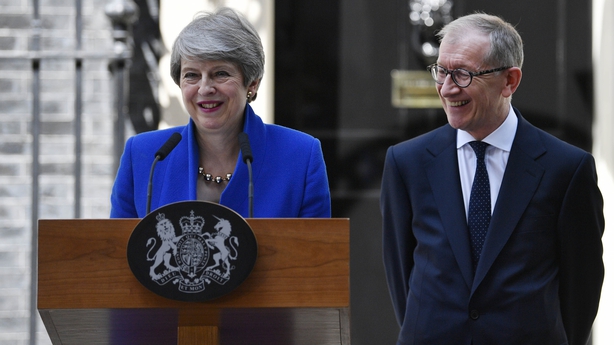 Flanked by husband Philip, she said: "I repeat my warm congratulations to Boris on winning the Conservative leadership election.

"I wish him and the government he will lead every good fortune in the months and years ahead.

"Their successes will be our country's successes, and I hope that they will be many.

"Their achievements will build on the work of nearly a decade of Conservative or Conservative-led government.

"During that time our economy has been restored, our public services reformed, and our values defended on the world stage.

"Of course, much remains to be done - the immediate priority being to complete our exit from the European Union in a way that works for the whole United Kingdom.

"With success in that task can come a new beginning for our country - a national renewal that can move us beyond the current impasse into the bright future the British people deserve."