The new British Prime Minister, Boris Johnson, has formed a government dedicated to his goal of delivering Brexit, saying the UK can agree a deal without checks on the Irish border.

In his first speech at No 10 Downing Street, Mr Johnson promised to give the UK "the leadership it deserves" and said he would meet the 31 October departure deadline with "no ifs or buts".

He said the UK can agree a deal to leave the European Union without checks on the Irish border.

The first appointments to Mr Johnson's cabinet were Sajid Javid as Chancellor of the Exchequer and Priti Patel as Home Secretary. Dominic Raab has been named as the new Foreign Secretary.

The appointments came after Mr Johnson wielded the axe, with more than half of Theresa May's cabinet either quitting or being sacked.

Jeremy Hunt, Mr Johnson's rival in the Conservative Party leadership race, left the government after refusing to be demoted from foreign secretary.

Penny Mordaunt and Liam Fox, prominent backers of Mr Hunt, were among the first to depart as Mr Johnson carried out a radical reshaping of the cabinet. 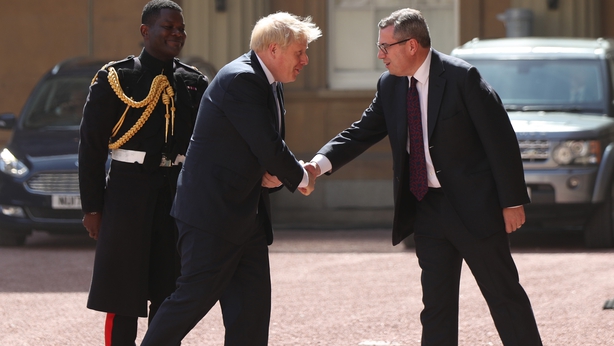 Mr Johnson's first hours as Prime Minister began with a wide-ranging speech in Downing Street shortly after being asked to form a government by Queen Elizabeth.

He promised he would "change this country for the better" and vowed to prove the Brexit doubters wrong.

He said: "I am standing before you today, to tell you the British people, that those critics are wrong - the doubters, the doomsters, the gloomsters are going to get it wrong again".

He predicted that "the people who bet against Britain are going to lose their shirts because we are going to restore trust in our democracy".

He added: "And we are going to fulfil the repeated promises of parliament to the people and come out of the EU on October 31st, no ifs or buts.

"We will do a new deal, a better deal that will maximise the opportunities of Brexit while allowing us to develop a new and exciting partnership with the rest of Europe based on free trade and mutual support.

"I have every confidence that in 99 days' time we will have cracked it."

On the issue of the Irish border - the main stumbling block in reaching a Brexit deal - Mr Johnson said he is "convinced" a solution could be found without checks at the border and without "that anti-democratic backstop".

But he added: "It is of course vital at the same time that we prepare for the remote possibility that Brussels refuses any further to negotiate and we are forced to come out with no deal."

Minutes after Mrs May left Buckingham Palace having offered her resignation to Queen Elizabeth, Mr Johnson arrived to be appointed as her successor.

As the Conservative Party leader's car was driven along The Mall to the palace, banner-waving climate change protesters from Greenpeace attempted to impede its journey. 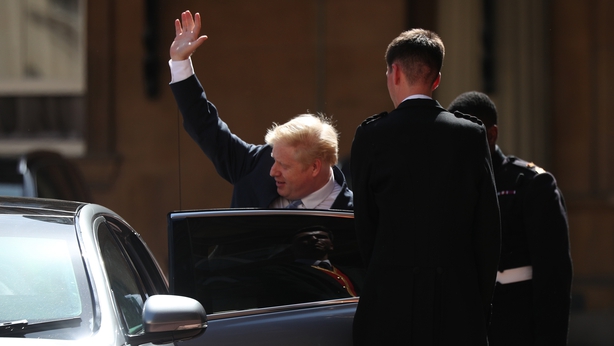 Mr Johnson faces a difficult task as he attempts to govern with a majority of just two and now a host of disaffected former ministers.

His answer appears to be reuniting many of the key players from the Vote Leave referendum campaign which secured victory for Brexit in 2016.

Ms Patel was a leading player in the campaign and returns to government after she was forced by Mrs May to resign as international development secretary over unauthorised contacts with Israeli officials.

Mr Cummings clashed with officials and politicians while he was an adviser to Michael Gove in the coalition government, but Mr Johnson clearly believes his forthright style will help steer Brexit through.

The appointment of the Vote Leave campaign director is controversial given that earlier this year he was found to be in contempt of parliament for refusing to give evidence to a committee of MPs investigating "fake news". 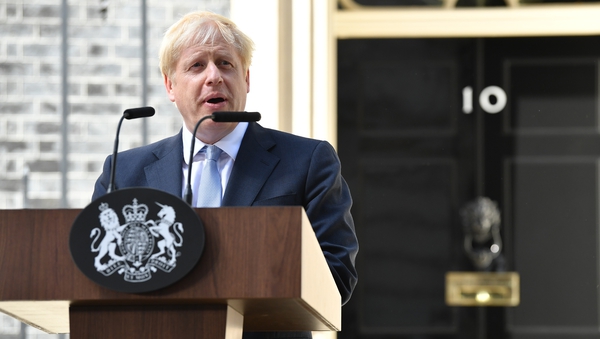