Jeremy Corbyn has addressed thousands of people who took to London's streets in protest on the second day of US President Donald Trump's state visit to Britain.

President Trump said he refused to meet the Labour Party leader and dismissed reports of demonstrations as "fake news".

Mr Corbyn, who refused to attend a state banquet last night, spoke to crowds from a stage in Whitehall this afternoon.

"In welcoming visitors to the United States, I hope there can be a conversation," he said. 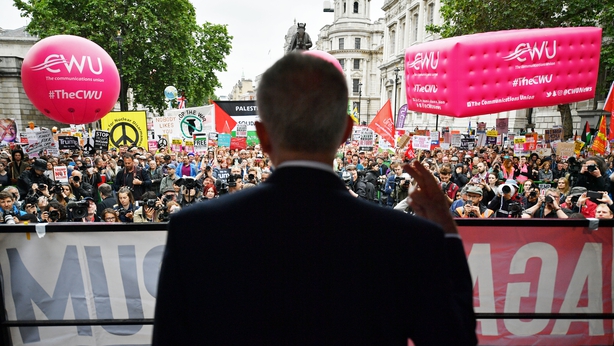 "I am not, absolutely not, refusing to meet anybody. I want to be able to have that dialogue to bring about the better and more peaceful world that we all want to live in.

"But I'm very disappointed, particularly today, on the wonderful festival of Eid, that our Mayor of London Sadiq Khan has been attacked as he has.

"I am proud that our city has a Muslim mayor, that we can chase down Islamophobia, anti-Semitism, any form of racism within our society because racism divides."

President Trump attacked the mayor on Twitter moments before he landed in the UK, reigniting a war of words between the pair.

.@SadiqKhan, who by all accounts has done a terrible job as Mayor of London, has been foolishly "nasty" to the visiting President of the United States, by far the most important ally of the United Kingdom. He is a stone cold loser who should focus on crime in London, not me......

During a press conference with British Prime Minister Theresa May today, Mr Trump said he refused to meet the Labour leader, describing him as a "somewhat negative force".

A huge police and security operation was put in place, with more than 3,182 officers deployed as well as road closures, while protesters were barred from demonstrating directly outside Downing Street. 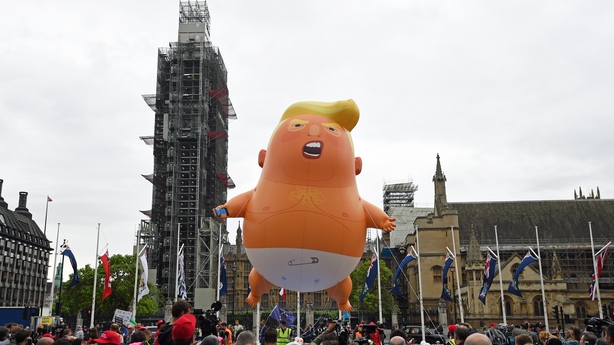 Scotland Yard's Deputy Commissioner Steve House told the London Assembly Police and Crime Committee today that the force was not in a position to estimate how much the operation would cost but added the president's last visit to the capital cost the Met Police about £2.9m.

Earlier today, the 20ft 'Trump baby' blimp, which became the focus of last year's protest during Mr Trump's first visit to the UK as president, took to the skies for a second time after permission was granted by the Greater London Authority.

A team of organisers wearing red jumpsuits and hats marked "Trump Babysitters" launched the balloon to cheers from dozens of onlookers at Parliament Square.

Some protesters shouted expletives as the president's motorcade passed the flying blimp on his way to Downing Street.

One group estimated tens of thousands of protesters were involved in the demonstrations - fewer than an estimated 250,000 who gathered when Mr Trump visited the UK on 13 July last year.

Dan Jones, a Trump blimp group "babysitter", said: "We're no strangers to the rain in the UK yet it's still something special when tens of thousands hit the streets on a wet working day. That's as strong a rejection of Trump's politics as you could ask for."

But Mr Trump said: "I didn't see the protesters until just a little while ago and it was a very, very small group of people put in for political reasons, so it was fake news."

Organisers of the Together Against Trump protest billed it as a "carnival of resistance", with demonstrators gathering at Trafalgar Square from 11am to declare a "Trump-free zone".

President Trump supporters also took to the streets to show their backing for the president.

Lewis Metcalfe, 28, from North Yorkshire, said he took a day off work to travel to London and offer "a difference of opinion".

"I don't agree with all his policies. He's not the greatest president in the world but he does get things done.

"I think it (the protest) is a little bit hypocritical because you get hundreds of thousands of people for Donald Trump today and yet we had minuscule, maybe hundreds of people, for Xi Jinping and Mohammed Bin Salman."