Tens of thousands of passengers have faced severe disruption to their travel plans as a result of the detection of drones at Gatwick Airport.

Here is a timeline of when events since they unfolded earlier this week.

Wednesday
9pm - Gatwick suspends flights in and out of the airport after reports of two drones flying near the airfield. Some planes are diverted to other airports.

Thursday
3am - The runway reopens

3.45am - The runway shuts again after a further report of drone sightings

10.20am - Sussex Police reveal the flying of drones close to the airfield is "a deliberate act to disrupt the airport", but "there are absolutely no indications to suggest this is terror related".

12.20pm - The airport's chief operating officer Chris Woodroofe says around 110,000 passengers are due to travel on Thursday, most of whom will see cancellations and disruptions. 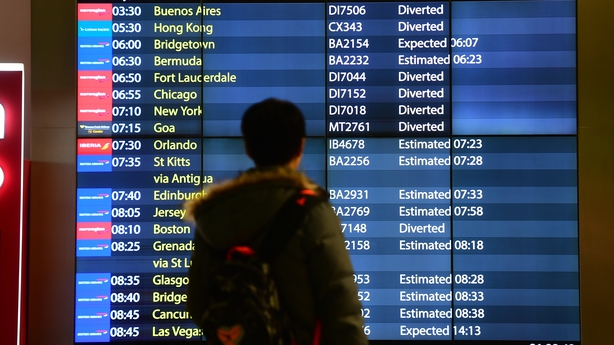 3.50pm - The Ministry of Defence says police are in "ongoing discussions" with the British Army about assisting with the operation to find the drones.

5.50pm - Gatwick's chief executive officer Stewart Wingate says the drone flights are "highly targeted" and have "been designed to close the airport and bring maximum disruption in the run up to Christmas".

9.30pm - Mr Woodroofe says the airport will remain closed for the rest of the evening after drone activity was reported "within the last hour".

9.30pm - Detective Chief Superintendent Jason Tingley, of Sussex Police, says there have been more than 50 sightings of the device in the past 24 hours. He reveals that shooting down the drone is a "tactical option" being considered by police.

Friday
5.58am - According to flight tracking website Flightradar24, a plane from East Midlands Airport lands at Gatwick.

6.30am - Gatwick Airport says the runway is "currently available" and that a "limited number" of planes are scheduled for departure and arrival.

10am - Gatwick Airport hopes to be back to normal at the end of the day.