Britain's International Development Secretary Priti Patel has quit her Cabinet role and acknowledged that her "actions fell below the standards of transparency and openness" she had advocated.

Her decision to resign came after being summoned back from an official visit to Africa for a showdown with Theresa May in Downing Street.

Ms Patel had been intending to spend three days in Kenya and Uganda, but was forced to cut short her trip and return home from Nairobi to explain the disclosure of further unauthorised meetings with Israeli politicians.

In a letter to the Prime Minister, Ms Patel said: "I offer a fulsome apology to you and to the Government for what has happened and offer my resignation."

Ms Patel's downfall came after it emerged she had a series of 12 meetings with senior Israeli figures during a holiday in the country in August.

She then held two additional meetings, one in the UK and one in the US, following her return from Israel. 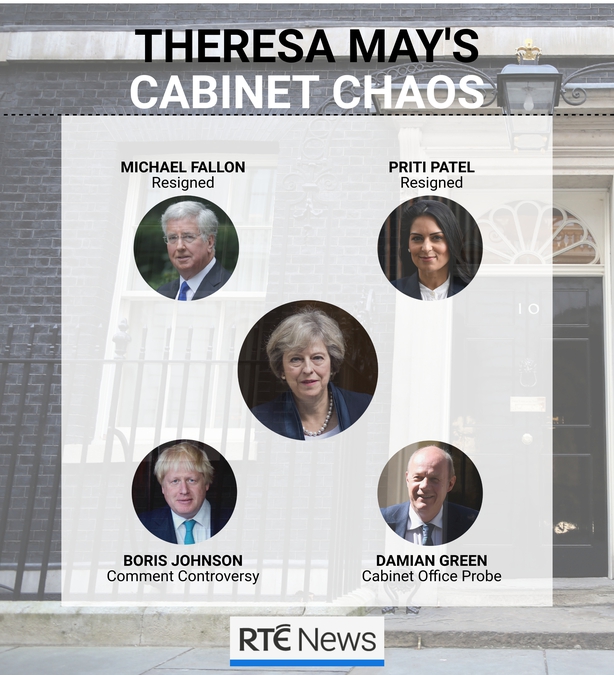 In a further development, the Israeli Haaretz newspaper reported that during her stay in the country she visited an Israeli military field hospital in the occupied Golan Heights.

In her letter Ms Patel said: "In recent days there have been a number of reports about my actions and I am sorry that these have served as a distraction from the work of the Department for International Development and of the Government as a whole.

"As you know from our discussions I accept that in meeting with organisations and politicians during a private holiday in Israel my actions fell below the high standards that are expected of a Secretary of State.

"While my actions were meant with the best of intentions, my actions also fell below the standards of transparency and openness that I have promoted and advocated."

Read more
Fiona Mitchell on the cabinet turmoil for Theresa May

The meetings, without officials and in relation to one of the most sensitive areas of foreign policy, led to Ms Patel apologising and being given a dressing down by Mrs May on Monday.

But the disclosures since then added to pressure on Ms Patel, culminating in a flight back from her curtailed Africa trip and a meeting in Downing Street lasting around 30 minutes during which it was made clear her Cabinet career was over.

In her reply to Ms Patel, Mrs May said: "As you know, the UK and Israel are close allies, and it is right that we should work closely together.

"But that must be done formally, and through official channels.

"That is why, when we met on Monday, I was glad to accept your apology and welcomed your clarification about the trip to Israel over the summer.

"Now that further details have come to light, it is right that you have decided to resign and adhere to the high standards of transparency and openness that you have advocated."