Witnesses have described screams of terror and people jumping in a bid to reach safety after the blaze ripped through Grenfell Tower in west London.

A witness said that a baby was caught by a member of the public after being dropped from the tower as it was engulfed with flames.

Samira Lamrani said she saw a woman try to save a baby by dropping it from a window "on the ninth or 10th floor" to waiting members of the public below.

Neighbour Samira Lamrani describes the moment a woman dropped her baby from a window in the burning tower to waiting public below. pic.twitter.com/5sweVQMoFy

She told the Press Association: "People were starting to appear at the windows, frantically banging and screaming.

"The windows were slightly ajar, a woman was gesturing that she was about to throw her baby and if somebody could catch her baby.

"Somebody did, a gentleman ran forward and managed to grab the baby."

Some residents of Grenfell Tower describe how they saw the blaze rip through the building pic.twitter.com/L7qOg6Bh9B

Grenfell Tower was built in 1974 and contains 120 homes, according to the Royal Borough of Kensington and Chelsea.

The building was upgraded at a cost of £8.6 million with work finishing in May 2016.

Part of the upgrade included insulated exterior cladding, but a resident of the 17th floor of the block, identified as Methrob, told LBC Radio the "real issue was when it caught fire to the cladding outside".

He added: "That's when I noticed the fire from outside when I looked out the window.

"By the time that we got downstairs, the fire had gone all the way up and it was just about reaching our windows on the 17th floor.

The whole one side of the building was on fire. The cladding went up like a matchstick

Methrob said residents had been concerned about safety, adding there had been warnings "for over a year".

He said one man was "trying to get everyone to get together to do something before it was too late".

Speaking from an evacuation centre on Freston Road, one woman said: "We were being evacuated from Testerton Walk, which is next to Grenfell, at about 1am, at that point it looked like just one side of the building was on fire, but within about 40 minutes we could see at least three sides were burning".

She said a woman behind her was shouting to someone she knew on the seventh floor.

"She was on the phone trying to speak to him, she was obviously very emotional because the flats were blazing at this point.

"Police said for anyone at the windows to wave a rag or something so the firemen could rescue them, but we thought: how are they gonna do that?

"I saw the woman later and she was hysterical and said her friend jumped".

She added: "Everybody was crying. Nobody really knew what was going, or what is happening from now on.

"Where do people go? People have been saying the whole building could collapse at any stage. So frightening."

'Number of fatalities' have been confirmed in London tower block fire pic.twitter.com/QIZM1kEyyR 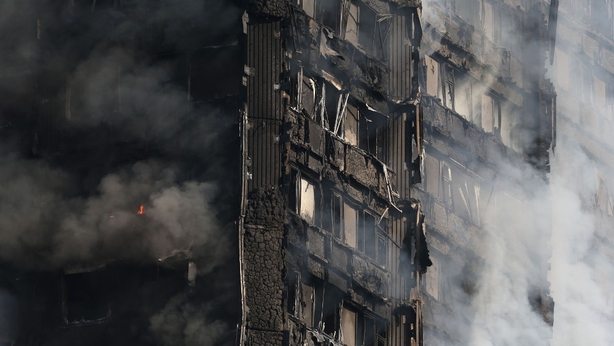 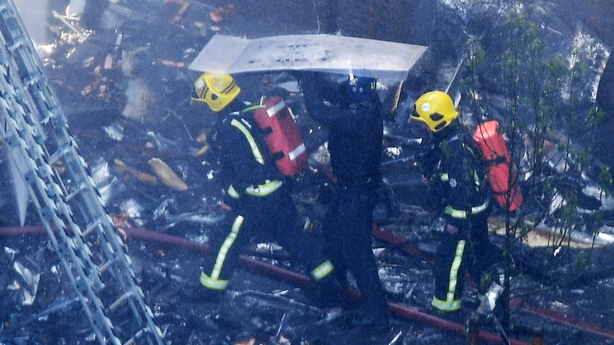 Another witness said: "It escalated really quickly. Around midnight the fire was only around the third floor and then, before you know it, the whole 23 floors of the building were all on fire and there were people screaming for help and throwing kids out.

"I think everyone felt really helpless because no-one could get to them. Everyone was really scared and they didn't know what to do and it was really sad to see.

"There was a lot of people there - children, elderly people and disabled people; my family members, who thankfully made it out. But there are still a lot of people who are unaccounted for."

"I think the speed of the fire was the most shocking thing for everyone, how quick it literally went from zero to 100

"I saw people flying out of their balconies and windows. I saw a man who flew out of his window, I saw people screaming for help. We saw a lot of people jumping out that basically didn't make it. It was from the eighth floor and up, and that kind of floor you wouldn't really make it."

Local resident Tamara told BBC News: "Around 12.30/1am my mum called me and said there was a fire outside. By the time I got there the whole right side of the building was on fire, the whole thing was engulfed in flames.

"We could hear people screaming 'Help me' so me and my brother, with some other people who live in the area, ran over to the estate to where you could still get underneath it and there were people just throwing their kids out saying 'Save my children'.

"The fire crew, ambulance and police couldn't do anything, they couldn't get in, and they were just telling them to stay where they are, and we'll come and get you. But things quickly escalated beyond measure and they couldn't go back in and get them.

"You could see the fire going into their houses and engulfing the last room that they were in." 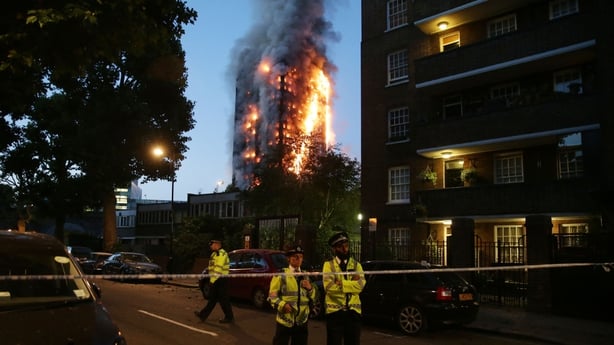 Ann Waters lives in a house at the foot of the tower and was forced to flee her home when burning debris began raining down.

"I was watching TV in bed and I could smell smoke and then I heard a fire engine and I jumped up.

"I went to my back bedroom, I thought if something was on fire I would see, and I was just speechless, the guy next door was screaming at people to get out of the building. 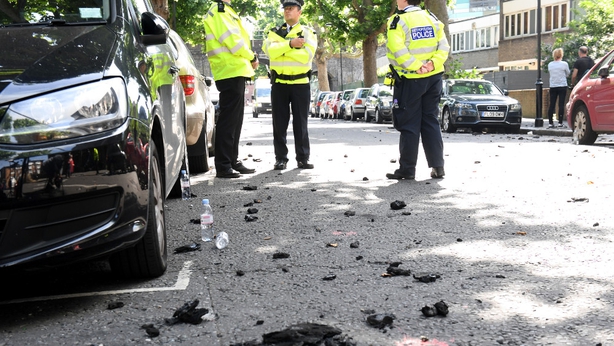 Singer Cerys Matthews, who lives nearby, said she was woken by a helicopter.

The Catatonia star told BBC Radio 5 live: "When we saw it in the early hours of the morning, the fire caught on the fourth floor.

She went on: "It's unbelievable that we're watching this in 2017.

What we're hearing is that nobody heard any alarms; that there was one exit and this is a 24-storey building. Young families, they were advised the stay put if a fire was going to break out.

"The most chilling thing is that the residents have had an action group for many years."

She said: "We're a tight community - people from all over the world living here.

"People are just so shaken. It's devastating. This is 2017. How can we not have had these high-density buildings safeguarded for this kind of major, major incident?

"The residents have been crying out for years, saying this is not safe. How can we have accepted that?"