Huawei has been gradually grabbing market share from established manufacturers in recent years, as the Chinese giant steadily makes in-roads into the global smartphone market.

Today, according to IDC, the company is the world's third largest smartphone maker, trailing only Samsung and Apple.

This is in large part a result of its large established size, a substantial marketing push and its low cost Chinese manufacturing base.

But it also has a lot to do with the quality of its devices and the big strides it has made into packing more and new features into its phones.

In this regards, the Huawei P20 Pro is no different. It takes both its style and substance from other market leaders, stuffing all manner of gizmos into the handset.

If one had to sum up the design of the Huawei P20 Pro in three words, it might be something along the lines of "stylish but unremarkable".

The device has Gorilla Glass front and back with an anodised aluminium band around the middle, giving it a shiny look that is attractive but also attracts fingerprints and smudges.

The display’s edges are bevelled but there are no curves, giving it a more traditional rather than modern look.

On the right side sits the volume rocker and the power button and there’s no buttons on the left.

The screen isn’t quite bezel-less, but isn’t far off it.

The fingerprint sensor is mounted on the front, just below the bottom bezel. It is compact, making it a little tricky to reach.

But it is accurate so a slight tap will be enough to get the phone awake and unlocked.

Like the iPhone X, the device also has a small notch above the display housing the front facing camera and flash.

If you don’t like it you can readjust the display so it drops below the notch rather than surrounding it, turning the top part of the screen into a notifications bar.

The rear has three camera lenses (more on that later) as well as the flash while the underside has the USB-C socket for charging and data connection.

Don’t go looking for a headphone jack though because there isn’t one (there is an adapter in the box).

All told, the look of the phone is perfectly fine – but it is unlikely to be the main attraction to most potential buyers.

The screen on the P20 Pro, on the other hand, is worth making a fuss about.

But don’t be put off by the use of the word "just" there.

It may not have quite the spec of some other high-end smartphone competitors, but the P20 Pro’s display is very very good.

Colours are rich and clear, blacks are dark as coal and whites are Arctic.

The quality holds up even when viewed from different angles too.

There’s plenty of ways to adjust the display to suit your preferences too, so you can ramp it up or dial it down according to your own taste. 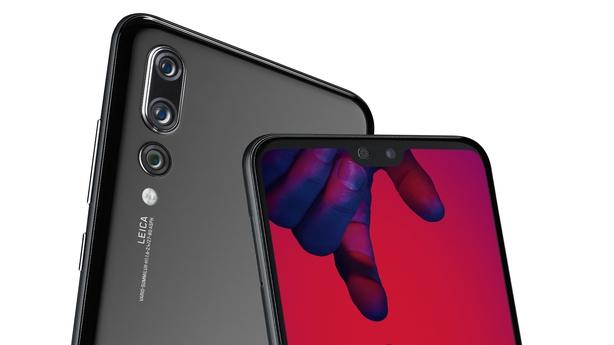 The big standout feature of the P20 is the not one, not two, but three cameras on its rear – a world first for a smartphone according to Huawei.

The main camera is a 40MP sensor which boasts the highest total pixel count on a smartphone.

The second sensor is a 20MP monochrome (black and white) chip. Its role is to help with low light image capture and processing.

The third camera has a 3x optical zoom with an 8MP sensor – or 5x when in hybrid mode where some of the detail is lost but the zoom goes further.

Throw in new AI technology which recognises what you are trying to snap and adjusts accordingly, and you soon begin to see that this is one of, it not THE, most impressive camera setups on the market.

Photography aficionados will have great fun trying to push all the different features and effects to the limit.

But ordinary users will be impressed too – image quality is excellent, even in low light.

Zoom in on images digitally and they maintain impressive clarity.

The interface is clear and straightforward to use and there are plenty of modes to experiment with, including filters, 3D panoramas, document scanning and night mode which combines a number of images taken in quick succession together to improve the overall image.

Flip the device around and there is a 24MP sensor for crystal clear selfies.

The device captures video of up to 4k in resolution and slow-mo footage of up to 960fps.

It all amounts to one of the best all round camera experiences available on the market and one which won’t disappoint.

The P20 is big on size, but not quite as big on performance.

It is powered by the company’s own octa-core Kirin 970 processor coupled with 6GB of RAM.

That seems fine on paper, but independent testing has revealed that technically it is underpowered compared to competitors like the Samsung Galaxy S9 and the iPhone X.

In reality though, ordinary users with using it for ordinary tasks probably won’t find it under-performs.

For everyday use there is plenty in the tank to carry it through and even more onerous tasks like gaming are handled smoothly.

Apps open and close with lightning speed and the camera is super-responsive.

There are also plenty of options for optimising performance buried in the menus.

The device comes with 128GB of on board storage. Oddly though there is no microSD slot to expand that further.

The battery is a 4,000mAh unit. It provides plenty of power to get you through the day under most conditions.

It supports fast charging but not wireless which is a little disappointing at this price point.

The biometric facial recognition software is really impressive and in my experience far better than the iPhone X and Samsung Galaxy S9.

It unlocked the P20 Pro in lightning speed and rarely struggled.

The device runs on the latest version of Android, 8.1 or Oreo, with Huawei’s Emui interface sitting on top.

This is a pleasant and easy to navigate interface with little to object to, although it does come with a few too many apps pre-installed.

The device is water resistant, which is good.

And sound from the speakers is perfectly adequate, although perhaps not on a par with some of the more audio focused handsets from Sony and HTC.

Huawei has released a number of really good premium handsets in the last year or two.

But the P20 Pro is probably the first to robustly rival the iPhone and Samsung competitors.

The screen spec could be better, the design is a little dull, wireless charging would be a nice additional feature and the absence of a headphone jack will irk some.

But the camera and the use of AI is top notch (pardon the pun), while the battery and overall hardware performance is excellent, and these are the features that really matter to people.

It isn’t cheap. But at €750 SIM free it represents pretty good value for money when compared with rivals like the iPhone X, the Samsung Galaxy S9 Plus and Sony XZ2.

Huawei hasn’t quite built the perfect smartphone yet. But Apple and Samsung should start looking over the shoulder.