Europe has launched a satellite dedicated to monitoring the Earth's atmosphere, the protective layer that shields the planet from the sun's radiation.

The Sentinel-5P orbiter took off on time at 10:27 Irish time from the Plesetsk Cosmodrome in northern Russia.

"The Rokot carrier rocket successfully launched from the Plesetsk Cosmodrome," the Russian space agency said in a statement.

It is the first satellite dedicated to monitoring Earth's atmosphere for Europe's Copernicus monitoring project.

The satellite -- carried by a Rokot, derived from the former Soviet intercontinental ballistic missile -- left behind billows of yellow smoke amid an autumnal landscape of boreal forest.

The Sentinel-5P project is managed by Irish man, Kevin McMullan.

The satellite will form part of the Copernicus project, a joint initiative of the European Union and the European Space Agency to track environmental damage and aid disaster relief operations.

It was the sixth satellite to join the Copernicus constellation. Others launched since April 2014 monitor forest cover and land and water pollution. 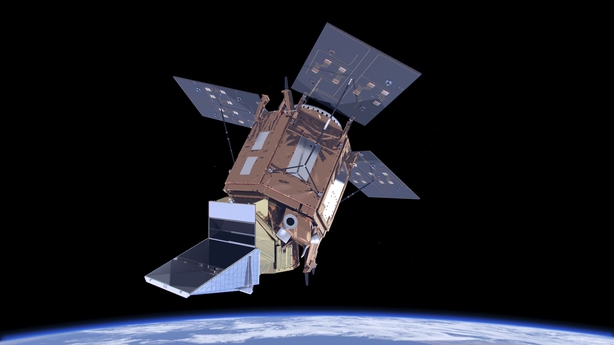 "Once operational, Sentinel-5P will map the global atmosphere every day with a resolution as high as 7 kilometres x 3.5 kilometres," the European Space Agency said this week.

"At this detail, air pollution over cities can be detected."

The satellite is carrying a state-of-the-art Tropomi monitoring instrument used to map trace gases such as nitrogen dioxide, ozone, methane, carbon monoxide and aerosols that "affect the air we breathe and therefore our health, and our climate," the European Space Agency has said.

The Copernicus programme is named after the 16th-century Polish astronomer Nicolaus Copernicus, who determined that the Earth orbited the sun, and not the other way round.

The development came as Enterprise Ireland signed an agreement with the European Space Agency that will provide the state with access to the Copernicus Programme's near-real time earth observation information.

The data will be stored locally for research, commercial development and policy informing purposes.

The accord was signed at the European Space Research and Technology Centre (ESTEC) in Noordwijk, The Netherlands.

"This agreement will greatly support Ireland's national strategy to maximise the value created from our investment in space related technologies," said Minister of State for Training, Skills, Innovation, Research and Development, John Halligan TD, who was in ESTEC for the event.

"Furthermore, the agreement will act as an important resource as Ireland continues to develop world class skills in data analytics".