Eight primary schools have suspended part of a controversial religious education programme that segregates children according to their religious background at a key time in the Catholic calendar.

The schools, which are State-run Community National Schools, took the step this year after consultation with parents, writes Education Correspondent Emma O Kelly.

A ninth CNS school suspended the programme entirely five years ago after objections from parents.

The National Council for Curriculum and Assessment (NCCA) has said it will begin a review of the programme from September.

The 'Goodness Me, Goodness You' religious education programme was drawn up after the Catholic Church warned the Department of Education that the provision of faith formation for Catholic pupils was a "minimum non-negotiable requirement" for its support for the new Community National School, multi-denominational model.

The State agency for developing curricula advised at the time against separating young children.

The NCCA said doing so ran counter to how children settled at school. School principals, teachers, and parents also objected to the proposals.

But the programme went ahead, with children divided into four groups: Catholic, Other Christian, Muslim, and Other/none in the month before Easter.

This year eight Community National Schools in Dublin and in Cork have decided to abandon the practice.

One school principal told RTÉ News they had spoken to all parents and there was "no demand" for segregation.

However, Catholic pupils in the schools continue to be separated from classmates on a weekly basis in second and in sixth class to allow them to prepare for Communion and Confirmation during school time. 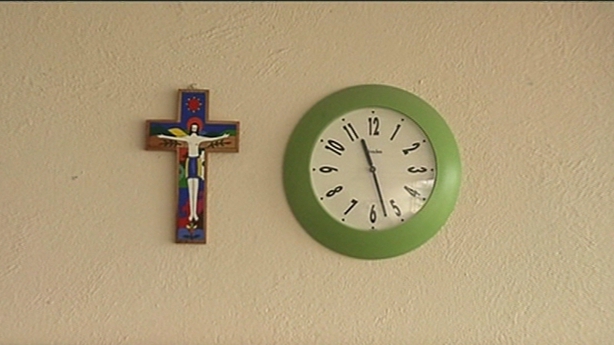 Two Community National Schools, Árd Ri in Navan, and Lucan CNS in Dublin continue to separate all children in the month running up to Easter. Neither school has responded to queries from RTÉ News about the programme.

Another Community National School, Scoil Choilm, suspended the 'Goodness Me, Goodness You' syllabus entirely five years ago after parents objected to the segregation of children and to the content of the religious education programme.

One former Scoil Choilm teacher, who wished to remain anonymous, told RTÉ News: "I didn’t feel comfortable teaching it and I was glad when it was suspended. We were trying to teach them (non-Catholic children) what their religion is. Their parents found it insulting and I don't blame them."

Scoil Choilm in Dublin 15 is in the process of introducing a newly developed version of the programme for senior pupils, which does not contain the four-week separation component.

Unlike the original programme, this follow-on curriculum is being designed by the NCCA.

There are currently 11 Community National Schools providing education to children in Dublin and other parts of the country.

The schools are run by local Education and Training Boards (formerly VECs) and unlike other multi-denominational schools, guarantee faith formation for Catholic children during the school day. Many more CNS schools are expected to open in coming years.

Minister for Education Richard Bruton has signalled that the CNS model is the one he favours extending in order to address the dominance of the Catholic Church in the primary education system.

The original 'Goodness Me, Goodness You' programme was designed by private Catholic college the Marino Institute of Education. However, a leaflet distributed to prospective parents at recent enrollment meetings, and available online, implies otherwise.

The leaflet states that the schools' religious education programme "was developed by the National Council for Curriculum and Assessment which is the statutory agency with responsibility for developing curricula". 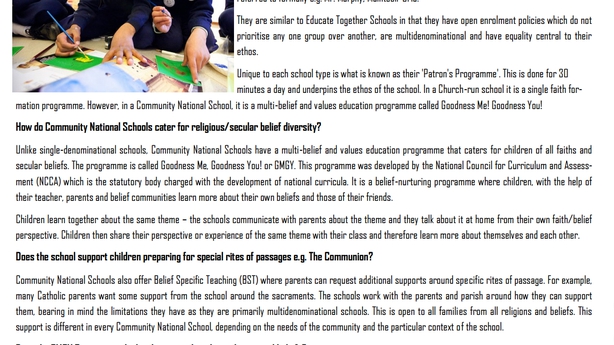 A Frequently Asked Questions section on the CNS website states that the programme was written by "a team of writers under the NCCA". 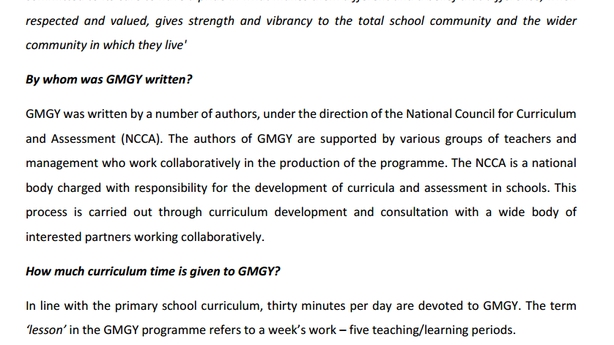 The GMGY programme was in fact written by Dr Clare Maloney of the Marino Institute of Education. The Department of Education did initially approach the NCCA about designing the programme.

However, after the NCCA advised against separating children along religious lines, the Department commissioned the college at Marino to develop the programme instead.

At the time the head of County Dublin VEC - patron of the first Community National Schools - expressed "dismay and disappointment" at the Department’s decision.

Four years later the programme was transferred to the NCCA.

When contacted by RTÉ News, the Education and Training Boards Ireland (ETBI) acknowledged that Dr Clare Moloney was the author of the programme.

Michael Moriarty of the ETBI said he did not agree however that the literature was misleading.