Hundreds of British war veterans have joined world leaders in Normandy for a series of events to mark the 70th anniversary of the D-Day landings.

Royals and no fewer than 20 world leaders, including US President Barack Obama and Russia’s Vladimir Putin, are expected to attend a D-Day commemoration ceremony tomorrow.

Britain’s Queen Elizabeth II has made an increasingly rare foreign visit to be present for the events.

The Prince of Wales and the Duchess of Cornwall, meanwhile, have met old troops of the Glider Pilot Regiment at Pegasus Bridge, the first assault of the D-Day invasion.

Speaking in Brussels alongside UK Prime Minister David Cameron, US President Barack Obama hailed the “great alliance” between Britain and America in paying tribute to the soldiers from both countries who fought side by side on D-Day 70 years ago.

Mr Obama said the two countries stood together “like two rocks of freedom and democracy” in the Second World War.

“American and British troops stood together and fought valiantly alongside our allies. They didn’t just help to win the war, they helped to turn the tide of human history and are the reason that we can stand here today in a free Europe”, he said.

Mr Cameron also honoured the soldiers who fought, saying “we will never forget what they did and the debt that we owe them for the peace and the freedom that we enjoy on this continent”.

Pope Francis earlier hailed the soldiers who fought ‘Nazi barbarism’ and voiced the hope that European nations could recover their Christian roots.

In a letter from the Vatican to French Catholic leaders, the pontiff said that the commemoration “reminds us that excluding God from the lives of people and societies can bring nothing but death and suffering”.

Troops have departed Portsmouth for Sword Beach, the easternmost of the five French beaches targeted by Allied forces in their invasion.

It will be the location for a major international ceremony to mark the anniversary tomorrow.

One of Ireland’s last surviving D-Day veterans won’t be in attendance at tomorrow’s anniversary events, however, as ill health has forced him to abandon travel plans.

He has asked ex-soldiers to lay a home-made wreath at a memorial to commando units on the Saulnier farm near Amfreville where they were holed up for weeks.

The spirited pensioner has recalled the treacherous landing, the thunderous noise of planes and battleships and the devastating Germany artillery and sniper fire.

“The whole thing was to move fast. Not to be an object for the snipers”, he said.

The rifleman was in 6 Commando, a unit tasked with securing the strategically important Pegasus Bridge near Caen.

"We came up to the bridge and you could hear the bullets pinging off the ironworks, steelworks, and we had a few casualties there.

“They were all over us. The Germans had been there for four years, so they had good sniping positions," he said.

Mr Gillen spoke of his “sense of sadness” at not being in a position to travel back, having been invited as part of the Heroes Return 2 scheme promoted by the UK’s Big Lottery Fund.

More than half of the ex-commando's brigade were casualties in vicious assaults by German forces.

Mr Gillen was never injured despite, like all commandos, wearing his green beret in a six mile trek from Sword beach to Pegasus through marshland, sniper positions, a bogus minefield and several weeks in the trenches at Saulnier.

"I suppose you could say I was lucky, or it was in the book or not in the book," he said.

"We had to dig in. But what we didn't know was that the Germans were only 500 yards ahead of us in a green wheat field.

"We had one very bad day, a counter-attack. In the morning, about 8am, I think it was June 10 or 12 - the Germans put in a very heavy counter-attack.

"It went on from about 8-11 o'clock. It was very ferocious. We lost a lot, but they lost more. The Germans moved on to 3 commando or 4. They got a bit of a belting and they repulsed their attack but it was one of the bloodiest days ever."

Mr Gillen's family has a strong war service record with his father Bill injured three times in the First World War serving with the mounted signals of the Royal Engineers. He completed three tours at the Somme.

The veteran recalled his reaction when he ran away from his Galway home aged 18 to enlist in Enniskillen on Easter Monday 1943.

"There was hell to pay back home, I believe," he said.

The cousin he enlisted with, Tommy Cotter, a gunner in the RAF, died in one of the last bombing raids over Berlin, and is buried in Potsdam.

Another cousin Eamon Gillen, from Dublin, is buried in Appledorn, Holland.

A smaller event to commemorate those who died in the military operation was meanwhile held on the English side of the Channel at Southsea Common, Portsmouth, today.

In attendance were 80 former soldiers and representatives of the armed forces of Britian, Canada and France. 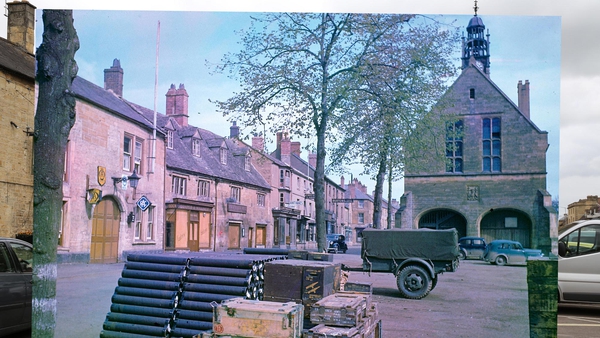 Then and now: D-Day images show contrast with Europe today