The injured, bloodied and bandaged lay beneath icons and candles on the floor of St Michael's Golden-Domed Monastery.

The combat fatigues and green helmets of some recalled the primitive field hospitals of distant wars.

As the death toll climbed from Ukraine's bloodiest day in two decades of independence, the wounded sought refuge beneath the bell tower of a sympathetic Kiev church.

Volunteers sorted through medical supplies - iodine, gauze, bandages - brought in bags and boxes by anxious residents of the capital.

Doctors tended to the wounded on beds in aside-building of the monastery complex, while people hurried through the main doors clutching bottled water, bread, ham and processed cheese. 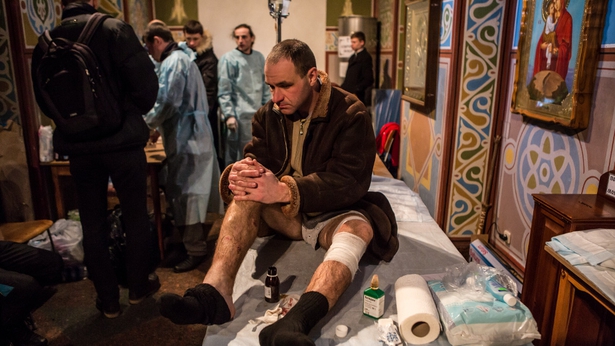 It was a scene of quiet determination and order, a short walk uphill from the black smoke and violence of Independence Square, crucible of a geopolitical battle between Russia and the West.

"Our men are on the barricades, so we just want to help," said a volunteer, who gave only her first name, Yulia, and said she was a lawyer.

"I can't work in this country; it's all about bribes, everywhere there are bribes, and I've had enough," she said.

In three months of protest since President Viktor Yanukovych turned his back on a deal with the European Union, St Michael's has emerged as spiritual protector of those who would bring him down.

Ukrainian Orthodox Church of the Kyivan Patriarchate, to which St Michael's belongs, has historically walked an independent line from Russia, the dominant voice in Orthodox Christianity and also Mr Yanukovych's key foreign ally.

The patriarchate has actively supported the calls of the protesters for Ukraine to shift its alliances west towards the European Union, something Mr Yanukovych spurned in November last year under pressure from Moscow.

His decision threw the sprawling country into turmoil.

Yesterday and through the night, 26 people, including ten police officers, were killed in fierce battles between protesters and police in Kiev.

Mr Yanukovych accuses his opponents of trying to seize power by force.

Hundreds have been injured, some carried or driven by ambulance into the monastery grounds to be treated by doctors. 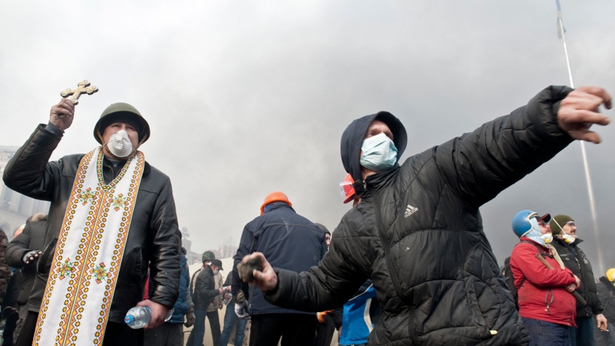 Such makeshift clinics have grown up partly out of fear of arrest if patients are taken to state-run hospitals.

Behind the monastery's sky-blue and white baroque walls, topped by domes of gold, dozens of protesters lay resting on rugs, heads or limbs wrapped in white bandages.

Many were still in their battle garb; kneepads, gloves and ice hockey helmets. Bearded priests paced the grounds, but declined to speak to reporters. Men guarded the entrance, one holding a hammer.

St Michael's has seen turmoil before.

Eight hundred years ago, priests threw open the doors of the original monastery to people fleeing Tatar and Mongol invaders.

Like many religious buildings under Soviet rule, the monastery was demolished on Stalin's orders in the 1930s and rebuilt in the 1990s after Ukraine won independence.

When violence first broke out in early December during the current protests, activists rang the church bells to summon reinforcements - a tactic used centuries ago at the first sign of attack.

The demonstrators still held Independence Square, known to them as Maidan, today. But police warned of an "anti-terrorist operation" to wrest back control.

In the west, a bastion of Ukrainian language and nationalist sentiment, there were signs of a wider uprising. 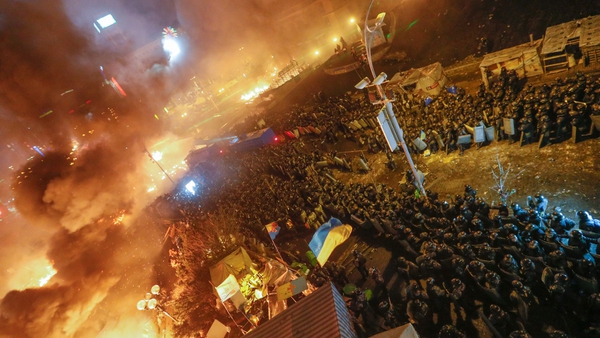