An engineered enzyme that eats plastic could usher in a recycling revolution, scientists hope.

Tests showed that the lab-made mutant had a supercharged ability to break down polyethylene terephthalate (PET), one of the most popular forms of plastic employed by the food and drinks industry.

Bottles made from PET are used to package 70% of soft drinks, fruit juices and mineral waters sold in shops and supermarkets, according to the British Plastics Federation.

Although it is said to be highly recyclable, discarded PET persists for hundreds of years in the environment before it degrades.

The new research sprang from the discovery of bacteria in a Japanese waste recycling centre that had evolved the ability to feed on plastic.

While investigating the molecular structure of PETase, the UK team inadvertently created a powerful new version of the protein.

Lead scientist Professor John McGeehan, from the University of Portsmouth, said: "Serendipity often plays a significant role in fundamental scientific research, and our discovery here is no exception.

"Although the improvement is modest, this unanticipated discovery suggests that there is room to further improve these enzymes, moving us closer to a recycling solution for the ever-growing mountain of discarded plastics.

"The technology exists and it's well within the possibility that in the coming years we will see an industrially viable process to turn PET and potentially other (plastic) substrates like PEF, PLA and PBS back to their original building blocks, so that they can be sustainably recycled."

Working with US colleagues, the Portsmouth scientists subjected PETase to intense X-ray beams at the Diamond Light Source synchrotron facility in Harwell, Oxfordshire.

X-rays 10 billion times brighter than the sun are generated at the facility by accelerating electrons around a circular tunnel. The X-rays can be used to reveal the fine structure of materials and biomolecules, down to the level of individual atoms. 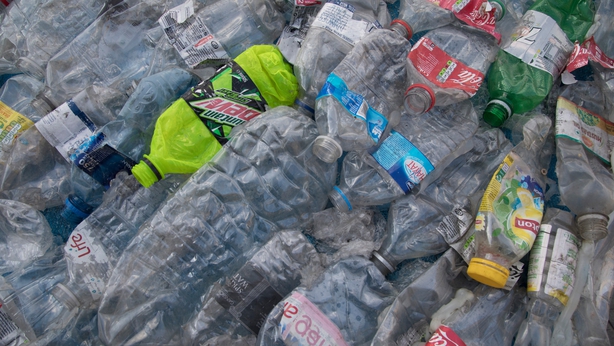 Using the PETase blueprint provided by the Diamond Light Sources, the scientists re-engineered an active region of the molecule. The result was a mutant protein with an enhanced ability to attack plastic.

In addition to digesting PET, the new enzyme was also capable of degrading polyethylene furandicarboxylate (PEF), a bio-based form of plastic being hailed as a replacement for glass beer bottles.

The findings are reported in the journal Proceedings of the National Academy of Sciences.

Prof McGeehan, director of the Institute of Biological and Biomedical Sciences in the School of Biological Sciences at Portsmouth, said: "Few could have predicted that since plastics became popular in the 1960s huge plastic waste patches would be found floating in oceans, or washed up on once pristine beaches all over the world.

"We can all play a significant part in dealing with the plastic problem, but the scientific community who ultimately created these 'wonder-materials' must now use all the technology at their disposal to develop real solutions."