The HSE has confirmed it has yet to appoint an operator to run a facility for adults with disabilities in Co Monaghan which has lain empty for more than two years.

€1.5m of State funding was provided to build the seven-bedroom, residential centre in Carrickmacross which was constructed by the Respond Housing Association.

The building for people who have physical and sensory disabilities was completed by Respond in 2017 but has yet to open.

In response to queries from RTÉ's Prime Time, the HSE said the annual cost to run the unit will be €1.1m but confirmed funding had not been available for the past two years.

It also said an operator had yet to be given the tender to provide staff for the group home.

37-year-old Romy Ward, from Carrickmacross, who has Quadraplegic Cerebral Palsy, is one of those who will move into the unit when it opens.

Romy's parents, Brían and Sheila, began writing to the then local health board in 1997, asking for a plan to be put in place for her long-term needs.

Romy uses a wheelchair, has limited speech and eyesight, and the family is concerned they will not be able to look after her into the future.

"Our bodies are not fit to continue. We are just getting old. It is the unrelenting nature of the care. I don't feel right saying that, I feel disloyal, but it's unrelenting," 72 year-old Brían Mac a' Bháird told the programme.

"We love her, but it is hard work," explains Sheila Ward.

"We have to do all her personal care, all those needs. We don't mind doing any of it but we are getting so tired. It seems to be never ending."

The family was relieved when the HSE committed, in 2007, to provide a full-time, residential facility for Romy.

However, 12 years on, the new centre which has been built just a few kilometres from the family home, remains unopened. 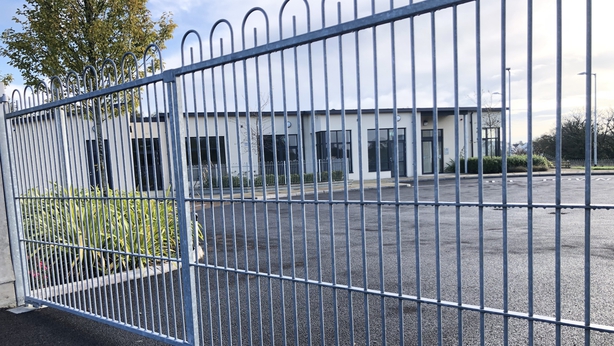 Monaghan County Council provided the land for the group home, and the not-for profit, Respond Housing Association, applied for State funding to pay for the cost of constructing the facility.

Building work began in February 2016 and was completed by the middle of 2017.

At that point, a different division of the HSE, HSE Estates, became involved and requested a number of alterations, which delayed the final completion date.

Since November 2018 all work has been finished but the facility remains unused behind locked gates.

"There have been so many false dawns, we sometimes don't even look into the building. We are thoroughly upset and annoyed, and sorry for Romy and the others who are counting the hours to get in and get their new lives started," said Mr Mac a' Bháird.

It's understood five people from the Cavan/Monaghan area have been advised that they will be moving into the facility when it opens.

The HSE confirmed an operator had been identified to staff the building but the cost had exceeded the available budget. It said that opening the unit next year would be considered as part of the budgetary process.

The executive said it had "always advised that the opening of this facility was and is conditional on available resources."

A spokesperson for the Department of Health said the HSE was working with relevant parties including Respond with regard to the development of the facility.

"Overall funding allocation for disability services in 2020 is now in excess of €2 billion for the first time," the statement added.

"I haven't a bulls notion how any Government department can sit back and allow this to drag on so long.

"It's become a bit of a joke now, people in town have stopped asking why the facility isn't open yet because there have been so many false dawns. People are looking in disbelief at how it has been allowed to rot."

"There is no official opening time earmarked for the group home," he added.

Respond, which will be the landlord on the facility, said it was disappointed it had yet to open.

"The HSE is the service provider and unfortunately until funding (to staff the facility) is in place the service cannot open," said Niamh Randall, Head of Advocacy and Communications.

"We are very disappointed but that doesn't reflect the extent of the impact on the families involved.

This is a much-needed service in the area and it must be really hard to see the empty building at this point in time.

The Ward family has also raised issues around the suitability and accessibility of the building.

These included the positioning of toilet bowls, a push button access system and accessibility of footpaths outside the facility.

The family said the HSE was lacking in project management expertise.

In response the executive said they were liaising with the Wards in relation to the matters.

"The specific needs of all residents are assessed and responded to as they arise and this will continue to be the case for all of the prospective residents," it said in a statement.

"The HSE are seeking an informal resolution in the first instance to these items of specific concern raised and are liaising with the complainant."

"There is a €40m deficit being carried across disability organisations. It's hard to plan for developing services when you have that level of pull on existing resources, so these stories are very common."

Disability Federation Ireland is calling for a €211m investment in community-based disability services over the next five years.

"Before you can even think about (new) developments and moving post-recession you have to understand the lag that is in disability organisations at present. That is affecting their ability to deliver services."

Commuting for a living