Taoiseach Leo Varadkar has appealed to Pope Francis to use his "office and influence" to ensure abuse survivors receive "justice, truth and healing".

In a speech in front of the Pontiff during a State reception at Dublin Castle, Mr Varadkar said the past treatment of many women and young people by the Catholic Church and the State had left a history of "sorrow and shame."

"In place of Christian charity, forgiveness and compassion, far too often there was judgement, severity and cruelty, in particular towards women and children and those on the margins," he said.

"Magdalene Laundries, Mother and Baby Homes, industrial schools, illegal adoptions and clerical child abuse are stains on our State, our society and also the Catholic church.

"Wounds are still open and there is much to be done to bring about justice and truth and healing for victims and survivors," said Mr Varadkar.

During his speech, the Pope said he shared the "pain and shame of the Catholic community" to tackle the "grave scandal" of clerical abuse. 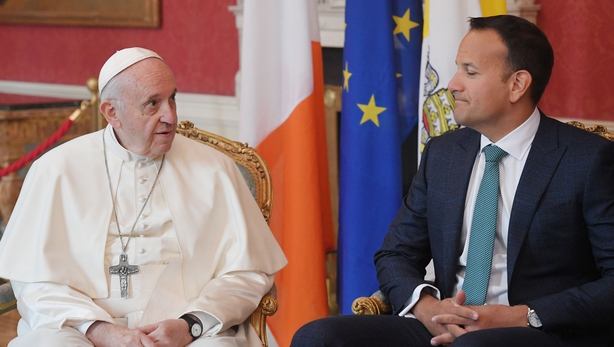 The remarks were made on the first day of his historic two-day visit to Ireland.

Pope Francis arrived at Dublin Airport on an Alitalia flight from Rome this morning, before travelling to Áras an Uachtaráin, and on to Dublin Castle.

Irish and Vatican flags were flown from the cockpit window as the aircraft taxied toward its stand at the airport.

Senior clerics and other dignitaries greeted the Pope, including Papal Nuncio Archbishop Jude Thaddeus Okolo, Archbishop of Armagh and Primate of All Ireland Eamon Martin, and Archbishop of Dublin Diarmuid Martin. 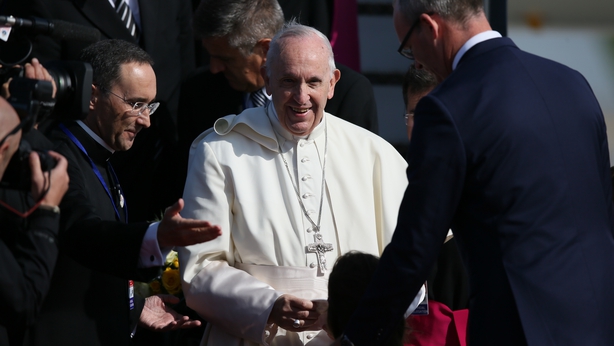 He was also welcomed by Tánaiste and Minister for Foreign Affairs Simon Coveney, his wife Ruth and their three daughters Jessica, Beth and Annalise.

The Boland family, who attended the World Meeting of Families, presented him with a vestment they designed.

During the flight, the Pope told journalists that he was happy to be returning to Ireland after being here for three months in 1980 to learn English. 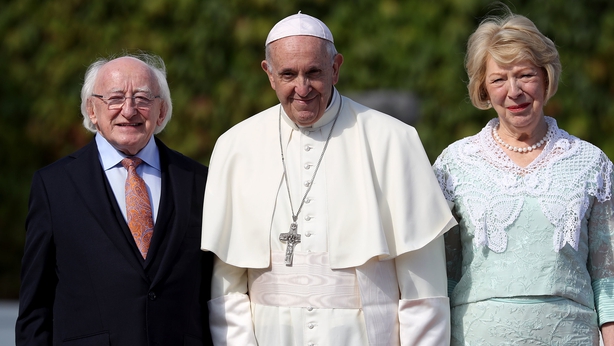 From Dublin Airport, the Pope travelled to Áras an Uachtárain where he was greeted by President Michael D Higgins and his wife Sabina.

He signed the visitor's book, held a 15-minute meeting with President Higgins and planted an Irish oak tree. 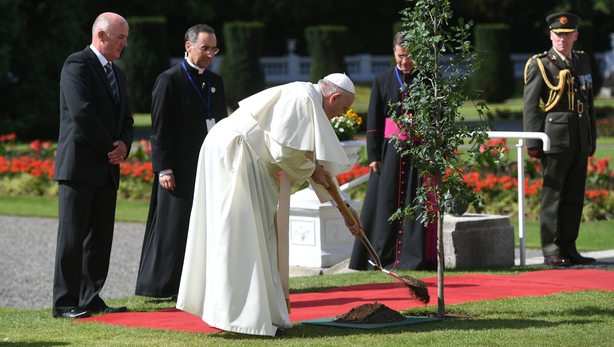 In doing so, he became the second Pope to plant a tree in the grounds of the residence.

Pope John Paul II planted an Irish oak on the same lawn during the last visit by a pope in 1979.

A Syrian family, who are asylum seekers, were invited to observe the ceremony.

Pope Francis then travelled to Dublin Castle for the State reception. 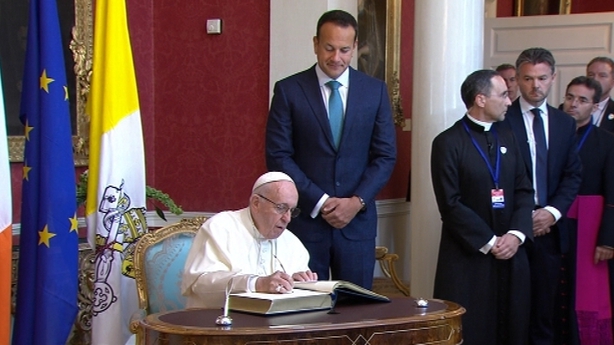 The Pope then visited the Pro Cathedral where he met 370 couples from each diocese in Ireland who were married this year or who are preparing for marriage.

Afterwards there was a parade through Dublin city centre in the popemobile to the Capuchin Day Centre of Brother Kevin Crowley, which offers outreach services to the homeless of Dublin.

This evening, the Pope will give a speech at the Festival of Families event in Croke Park.

The Papal mass tomorrow, which is the centrepiece of the World Meeting of Families (WMOF), will draw a crowd of half a million people to the Phoenix Park.

A number of park-and-ride hubs have been set up to facilitate the crowds as many roads are closed in Dublin city centre.

Tomorrow, the Pope will fly to Knock Shrine, ahead of a mass in the Phoenix Park, which is expected to be attended by up to 500,000 people.

Gardaí are urging the public to use public transport to attend events in Dublin and Knock.

The WMOF pastoral congress has seen tens of thousands of people from more than 110 countries pass through the doors of the RDS.

However the event has been overshadowed by the Catholic Church's treatment of clerical abuse survivors.

Pope Francis has said he will meet survivors of abuse in private at some point during his visit.

The We Are Church group has held a protest on Dublin's Ha'penny Bridge calling for reform of the Catholic Church.

Lord Mayor of Dublin Councillor Nial Ring has said he is sure that the Pope will receive a warm welcome.

In a statement, he said: "The eyes of the world will be on Dublin today and tomorrow and I know that my fellow citizens of Dublin will afford the Pope the respect and deference he deserves and will make him feel welcome in our city." 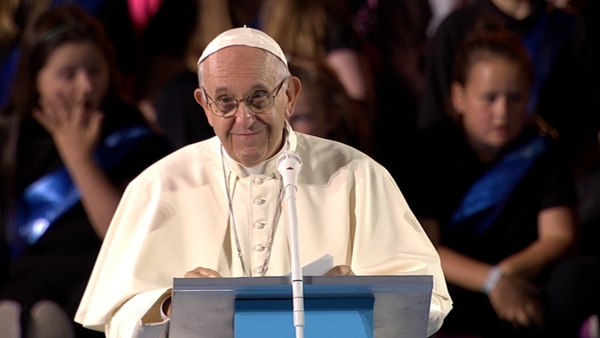 As it happened: Day One of Pope Francis' visit to Ireland