Irish MEPs Mick Wallace and Clare Daly have voted against a European Parliament resolution which condemns Russia's escalation of its war against Ukraine.

However, the MEPs were supportive of sections of the resolution which condemned Russia’s actions in Ukraine.

The resolution condemned the recent referenda in Russian-occupied parts of eastern Ukraine, which were a pretext for Vladimir Putin to annex four Ukrainian regions.

MEPs called for harsher sanctions and increased military support for Ukraine, and urged member states and international partners to prepare a "quick and decisive response" should Russia conduct a nuclear strike on Ukraine.

The motion, entitled a "resolution on Russia's escalation of its war of aggression against Ukraine," was passed with 504 votes in favour, 26 against and 36 abstentions.

Despite voting against the overall resolution, Mr Wallace and Ms Daly voted in favour of a number of paragraphs condemning Russia's action.

This included a paragraph condemning the "illegal and illegitimate...sham referendums conducted at gunpoint to annex the oblasts of Donetsk, Kherson, Luhansk and Zaporizhzhia."

The paragraph stated that the "referendums were conducted in violation of the UN Charter and international law; [the Parliament] rejects and does not recognise the fabricated results of the referendums and the subsequent incorporation of these territories into Russia; considers their results null and void; considers that the announced annexation constitutes a dangerous and irresponsible escalation and a blatant violation of international law and the UN Charter guaranteeing international peace, security, territorial integrity and the sovereignty of all states, which cannot and will not be left unanswered by the international community".

It called for member states and other countries to "massively increase their military assistance, particularly in the areas where it is requested by the Ukrainian Government, in order to allow Ukraine to regain full control over its entire internationally recognised territory and successfully defend itself against any further aggression by Russia".

Instead, Mr Wallace, Ms Daly and Luke Ming Flanagan MEP supported an amendment tabled by the Left Group which "regrets the absence of EU diplomatic initiatives" and called for negotiations, dialogue and a "peaceful solution" to the conflict based on "respect of Ukrainian territorial integrity and international law".

The amendment called for "a certain degree of autonomy" for some Ukrainian regions, as well as neutral status for Ukraine.

Ms Daly has accused the European Union of being "hell-bent" on the Ukrainian war continuing.

Speaking on RTÉ's European Parliament Report, Ms Daly, who opposes EU sanctions against Russia, said that that the West was refusing to "champion" peace negotiations.

Her comments however were sharply criticised by fellow Irish MEPs.

Speaking on the same programme, Seán Kelly of the European People's Party and Fine Gael said that Ms Daly's comments were "totally inaccurate" and that such a view was held by a "tiny minority" in the Parliament.

"The war continues because of Russia invading Ukraine, if Russia gets out of Ukraine, then the war is over," he said.

He also said that while peace should be sought, Ukraine should also be supported as it defends itself.

This week the EU approved an eighth round of sanctions. Fianna Fáil MEP Billy Kelleher said that along with those sanctions, support packages should also be rolled out for households and businesses as the cost-of-living rises.

Mr Kelleher it was important that Europe "stay the course", adding that "once there's cracks in the European Union it could embolden Putin and Russian troops".

Grace O'Sullivan of the Green Group welcomed the idea of a price cap on energy company's windfall profits however she said that her group would also like to see this become a permanent measure.

Separately, President of the European Parliament Roberta Metsola said that efforts to assist European people with inflation would require "more Europe, not less".

Ms Metsola said that countries would have to work together in finding solutions to the crises as was seen during the Covid-19 pandemic.

She said that member states had shown unity since the Russian invasion of Ukraine because citizens "demanded it".

"We actually express our solidarity with Ukraine, this is something that cannot be tolerated, this is an illegal, brutal, unnecessary and unprovoked invasion," she said. 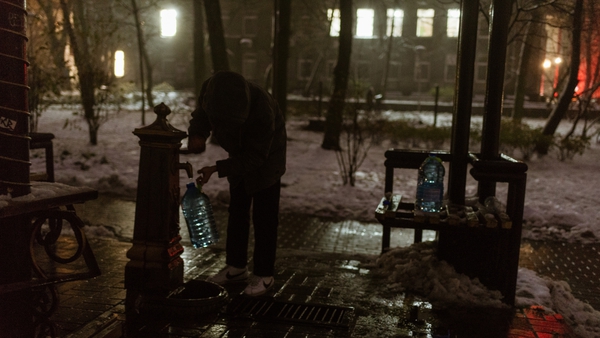