Taoiseach Leo Varadkar has said that he has "absolute confidence" in the Minister for Health, saying that Simon Harris was someone who had "delivered" as a minister.

Ms McDonald wrote that the minister's position was untenable, and in a letter seen by RTÉ News, she said that Brexit should not be used by the Government or Fianna Fáil to tolerate incompetence.

Children's hospital: @campaignforleo says controversy about 'who told what to whom, when' pic.twitter.com/bi1hEu16j3

Speaking to reporters in Belfast, Mr Varadkar said that if the minister informed him any earlier of the emerging overrun in the cost of building the new national children’s hospital, he would have instructed him to do exactly what he did.

"Get to the bottom of it, minimise the overrun, to find out what the reasons were and to come back to the Government with options," the Taoiseach said.

He said that the ongoing controversy over the hospital project was a matter of process, rather than a matter of substance.

Mr Varadkar said the all controversy now was "who told what, to who and when".

He said nobody was arguing that the Government was wrong to go ahead with the project.

The Taoiseach also said that Mr Harris would be speaking in the Dáil next week and he did not want to pre-empt what the Wicklow TD might say.

Mr Varadkar also denied that the delay in informing the Government about the increasing costs had an impact on the Budget.

Earlier, he said that the impact of the cost overrun on Budget 2019 was a red herring.

He said: "Capital infrastructure spending profiles are now multi-annual and were announced in February 2018, not on Budget Day. 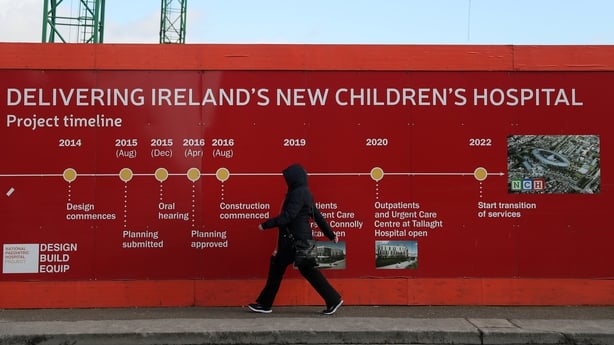 Tánaiste and Minister for Foreign Affairs Simon Coveney has said attempts to attach blame to Mr Harris over the National Children's Hospital project are "party politics".

Speaking to RTÉ News, Mr Coveney said: "Nobody is happy, least of all Simon Harris, in relation to how the initial cost estimate differs from what we now know what will be the true cost."

However, he said this was a "very different issue from the attempt to apportion political blame to Simon Harris personally today".

The Tánaiste also expressed "absolute confidence" in the Minister for Health, saying he had "probably the most difficult job in Government".

"Managing the Department of Health and the health service is hugely challenging, as we are seeing this week in the context of the nurses strike and of course in relation to managing the cost and delivery of a children's hospital, he said."

Earlier, Fianna Fáil TD Thomas Byrne accused the minister of misleading his party and the Dáil in relation to the overspend.

He called for Mr Harris to correct the Dáil record on figures he had given about the hospital development costs.

Speaking on RTÉ's Today with Sean O’Rourke, Mr Byrne said his party had been dealing very carefully and methodically with the issue and would do what is in the national interest, warning there was more information to be obtained.

Earlier, Sinn Féin’s health spokesperson Louise O'Reilly said the position of the Minister for Health was "untenable" given what he knew about cost overruns at the national children's hospital last August.

The joint leader of the Social Democrats has said the minister's position was "untenable".

Róisín Shortall said that Mr Harris failed to notify the Taoiseach and the Minister for Finance of the cost overrun and that his handling of the issue "is simply not acceptable".

She said: "In any other situation, I think we would be talking about the Government falling over this issue. I think Brexit is the only reason why that hasn't happened."

Last night, Mr Harris defended his handling of information in relation to the cost overruns on the hospital.

He released a memo from August 2017, which said the construction budget was €191m above the previous estimate.

It also stated that the main builders had submitted substantial additional costs to the tune of approximately €200m. This brought the total cost overrun of the hospital to €391m.

However, a meeting between staff from both departments did not take place until November.

The documents suggest too that the Secretary General at the Department of Health had indicated during budget discussions in October that work was being done on the cost issues.

A spokeswoman for the minister said it remains the position that Mr Harris did not know about the final figures until 9 November, and he informed the Taoiseach and the Department of Public Expenditure and Reform on that date.

The minister also defended why the information had not been revealed in the Dáil or during the negotiations on the Budget and renewing the confidence and supply agreement between Fine Gael and Fianna Fáil.

He said Mr Varadkar and the Minister for Finance and Public Expenditure Paschal Donohoe were informed of the situation "at the appropriate moment" in November.