The political decline of the princely Sicilian Tomasi di Lampedusa family was probably nowhere in the thoughts of those gathered for the Fine Gael think-in last week.

But the wisdom imparted in The Leopard, the novel that chronicled the annihilation of that clan, seemed particularly apt.

Set against the backdrop of Fine Gael’s aim to present itself as the party that cares deeply about the environment, the sagacious words of Tancredi to his uncle the ageing king appear to sum up the challenge when he advised: "If we want things to stay as they are, things will have to change."

Words that had much resonance as: red meat, green issues and talk of a tight guest list for the Taoiseach’s 40th birthday celebrations peppered the agenda, the unofficial one at least. 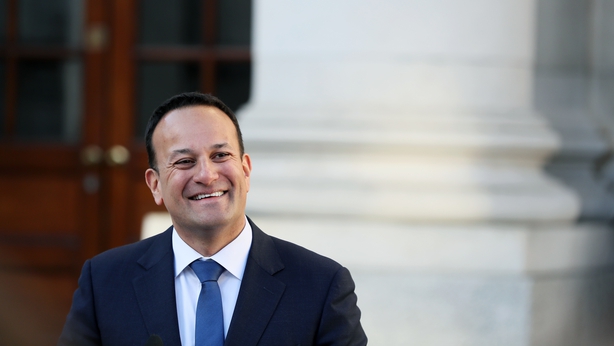 Indeed these were the key ingredients of the political week if, as many TDs endeavour to do, you can cast Brexit from the mind for a few moments.

And as the Taoiseach begins his fifth decade on Earth, heeding the multiple warnings to protect the planet is stirring up angst by the bucket load in his party.

This week alone a senior Government figure, using non-political parlance, claims to have told the Minister for Climate Action Richard Bruton that he could "shove the carbon tax" in let’s just say a certain direction.

There followed an apocalyptic warning that a hike in this tax would force people in rural areas to buy electric cars which they would then be forced to push up hills.

As both the Taoiseach and the Climate Action Minister suggest that those who reduce their carbon footprint may actually get money back, some within the party ask: why take the money away from people in the first place if it’s going to be returned anyway.

The answer is of course that the tax hike would incentivise people to somehow change their lifestyles and thus generate less carbon emissions.

The Government and the Taoiseach in particular is engaged in a most intricate balancing act here.

Fine Gael is seeking to become a party that champions its traditional support base, of which farming and industry would be seen to comprise a significant portion, while at the same time cultivating a new green image.

The Taoiseach’s admission that he was cutting down on red meat for both planetary and health reasons sparked no little ire, before he later declared that he had had a Hereford steak on Monday night and had no intention of becoming a vegan.

This opprobrium was swift though coming most vociferously from the Healy-Raes but many within the Fine Gael ranks also felt aggrieved.

One member of the parliamentary party cuttingly remarking that this was "the type of thing Enda would say."

For all that the EAT- Lancet report about the need to drastically reduce red meat consumption for the good of World suggested the Taoiseach was in tune with the most up to date research on the topic.

But it was distinctly out of sync with the majority view of his TDs and Senator many of whom dreaded having to return to their constituencies to further explain the Taoiseach’s comments.

But Fine Gael is on a hazardous journey here, perpetually talking about the need to address climate action but yet its critics would argue seeming to shirk big decisions.

The option not to increase carbon tax in the budget was the most recent example of the Government weighing up the merits of short term gains against it longer term aims.

Some of those inside Government Buildings hours before the budget have suggested there was real concern about that decision and how it might be perceived.

It did draw criticism from environmental campaigners and even from some the Taoiseach’s own constituents who accused him of putting party needs ahead of World ones.

The Green Party make even more extensive political charges accusing the government of opposing legislation to reduce waste, along with Dáil Bills that would have banned micro beads and halted future fossil fuel exploration.

While Minister Richard Bruton states he has government approval to develop a plan to make Ireland a leader in responding to climate change.

The Taoiseach too has to show he has genuine green credentials as both the European Parliament and the council elections come into view.

While health and housing will be the big issues in these campaigns there is something else making its way on to agenda.

And that is a key market for the future political health of Fine Gael and it recently turned 40 year old leader.

But this week must surely have shown Leo Varadkar that any gains here will be hard won.

Plus those who have dedicated their political lives to these causes have already issued the most stinging criticisms of the Taoiseach’s efforts.

The most acerbic of these was uttered by Green Party Leader Eamon Ryan on the day Leo Varadkar was elected Taoiseach when he said:  "Despite all the Pilates, frappuccinos, skinny lattes, avocado mash and jogging there is not a scintilla of green in you that we’ve seen over the last 20 years."

On the other front there is a battle too the exact measure of that will be gauged at the Irish Farmers’ Association AGM on Tuesday week. There Leo Varadkar will sit in a room filled with those most angered by his red meat reduction comments.

Some in Government hope the brunt of any anger will be mainly borne by the Agriculture Minister Michael Creed and the Taoiseach may receive a more polite welcome. But that may well be wishful thinking.