The Dáil has passed some of the key revenue raising measures of Budget 2019, including an increase in the VAT rate for the hospitality sector from 9% to 13.5%.

Despite some strong opposition to the rate rise being voiced by several TDs last night, it was passed by 64 votes to 36.

A significant number of TDs with constituencies outside of Dublin criticised the measure.

TDs who spoke against the resolution to raise the VAT rate with immediate effect noted that while hotel rooms were full in Dublin, the sector was struggling outside of the capital.

Politicians from across the Dáil said it would lead to job losses in local economies in rural Ireland.

Independents Michael and Danny Healy-Rae heavily criticised the Minister of State in the Department of Transport Tourism and Sport, Brendan Griffin, who is also from Kerry and who was in the Dáil for the debate.

Mr Griffin pointed out that the VAT rate was implemented as a temporary measure in 2011 and some of those "shouting on the other side of the house", did not support it on day one.

Minister for Justice Charlie Flanagan, who proposed the Dáil resolution on behalf of the Government, noted that last year the Minister for Finance committed to an impact assessment of revision to the original VAT rate.

He said that assessment did not point to the sky falling in or disaster for rural Ireland if the rate went back up.

The key points
Boost for housing, health and incomes
VAT for tourism sector to rise to 13.5%

Fianna Fáil leader Micheál Martin said Budget 2019 marks a significant shift but a lot more needs to be done, and the State needs to get involved in doing more to provide social and affordable housing.

Speaking on RTÉ's Morning Ireland, Mr Martin said it was "but one in a series of measures that have to be taken to end the misery of homelessness and people in emergency accommodation".

He said measures will have to be taken to give tenants security of tenure through the tax system, where "if a landlord was prepared to allow a tenant to stay for a prolonged period of time, in terms of the taxation system there would be benefits".

Mr Martin added that Fianna Fáil was working on measures to be included in the Finance Bill in November, but said there were some legal issues to be resolved.

Also speaking on Morning Ireland, she said while nobody would object to pensioners and others receiving an increase in their payments, she was disappointed that there was no "big ambition, investment and a clear path forward" to deal with the housing crisis.

Instead, she said, there was a re-hash of the same old ideas that favoured landlords.

She also said she felt that there could be an election "at any time", adding that the "courtship dance" between Fine Gael and Fianna Fáil had begun again, but it was clear a new government, with a change of direction, was needed.

Minister for Education Richard Bruton said the Government is ahead of targets on the programme "Rebuilding Ireland" set out by the then Minister for Housing Simon Coveney, but he acknowledged "it's not enough".

He said housing measures in yesterday's Budget will result in the "biggest investment in housing this State has ever seen".

Mr Bruton said the Government has an ambition to provide 110,000 social homes and "this is a huge shift in the way we do housing".

He said landlords were given an additional tax break as they "need more rented accommodation", they "need more people to enter the market to provide both affordable homes to purchase and homes to rent".

Mr Bruton said there was no change as regards carbon tax because "we have to get people with us. We need to see people switching their patterns of behaviour, moving away from driving diesel and petrol to electric".

"That is the long term strategy, to see people adapting to lifestyles that have lower carbon emissions," he said.

Rainy Day Fund an economic stimulus for next downturn - Taoiseach

Taoiseach Leo Varadkar has told the Dáil that the new Rainy Day Fund announced yesterday will be used as an economic stimulus for the next downturn when it comes.

He said money needed to be set aside for a downturn, which is inevitable.

He was responding to Labour Leader Brendan Howlin who asked the Taoiseach to explain the difference between the new rainy day fund and the existing strategic reserve fund.

Mr Howlin said the Government would need to change the fiscal rules to allow the change, describing it as "bad politics".

Mr Varadkar said primary legislation is required to establish the rainy day fund, and TDs would be able to engage in how it will operate.

The concept, according to the Taoiseach, is to take €1.5bn in Ireland Strategic Investment Fund and establish the Rainy Day Fund.

He expressed concern that corporation tax revenue "are unusually buoyant" and may not be there in the coming years.

The Taoiseach said he wanted a fund available to stimulate the economy if problems occur in relation to Brexit, international taxation, trade wars or anything that could tip the country into recession.

Meanwhile, the budget was criticised for giving over ten times more in tax and USC cuts to the highest paid than it gave to low-paid workers.

Independent think-tank Social Justice Ireland has welcomed increases in welfare payments and in public investment but said it is very disappointed at the failure to adequately tackle the housing crisis and climate change.

SJI's overnight analysis of the budget focuses on its impact on the 780,000 people who are officially identified as living in poverty, over 100,000 of whom have jobs. 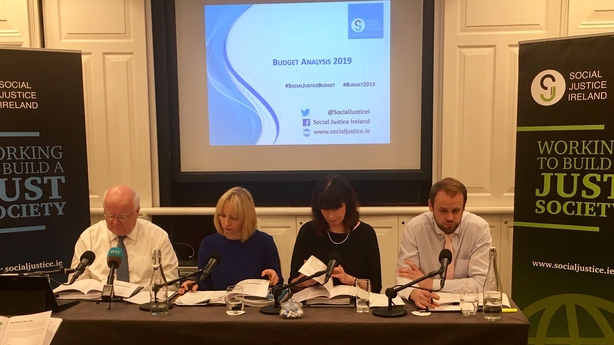 The organisation also criticised the reduction in capital gains tax on assets which are transferred overseas to 12.5%, substantially less than the regular 33% rate.

It praised the increases in social welfare payments, the minimum wage and in VAT on the tourism sector along with the increase in public investment.

However, it said it is very disappointed at the failure to adequately tackle some major challenges like the housing crisis, arguing that more resources should have been devoted to boosting the supply of social housing.