Senators have voted in favour of a bill prohibiting the import of Israeli goods produced in the occupied Palestinian territories.

An Israeli government official has warned that the initiative could jeopardise the possibility of future peace negotiations taking place between Israel and Palestine.

The proposal, led by Independent Senator Frances Black, passed by 25 votes to 20 after Fianna Fáil, Sinn Féin, Labour and other Independent senators supported it.

Ms Black said: "This bill is historic for the Palestinian people. It's about banning goods from the illegal settlements which we know under international law are illegal.

"We know that what is going on over there are war crimes to the Palestinian people.

"This is about banning goods. We are actually receiving stolen goods every time we receive goods into Ireland." 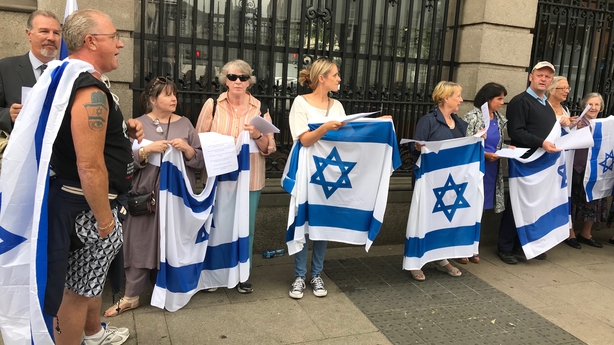 The value of exports from Israeli settlements in the occupied Palestinian territories to Ireland is estimated at between €500,000 and €1m per year and a total of €300m to the EU. Among the products are some agricultural products such as vegetables, garden furniture and cosmetics.

Senator Black said Ireland could lead the way with this bill as some Dunnes Stores workers did with their anti-apartheid stance in the 1980s.

Two Palestinian farmers, Fayez and Muna al-Taneeb, from the West Bank joined Senator Black and other politicians to hand over a symbolic olive tree and show support for the Occupied Territories Bill this morning.

Spokesperson for the farmers Fadi Quran said: "For the Palestinian people, if this bill passes today, we will celebrate it like St Patrick's Day is celebrated in Ireland. These farmers have had their farmland destroyed three times and they are not alone.

"Thousands of farmers in Palestine have had their land stolen and plundered by Israeli settlers. These products that are stolen from these Palestinian farmers often find their way into European and Irish markets. This bill will stop that, it will be a tipping point, not just for Ireland but for the whole European Union.

WATCH: @simoncoveney warns Seanad bill that proposes a ban on  imports of Israeli goods produced in the occupied Palestinian territories will not help efforts to secure peace in the region pic.twitter.com/l4OB78Gt7X

Tánaiste and Minister for Foreign Affairs Simon Coveney said the Government could not support the bill.

However, Mr Coveney said he understood the "utter frustration" and the "deep sense of injustice" about what the Palestinian people have to live with every day.

He said the Attorney General had submitted a 52-paragraph letter outlining why the bill was not legally implementable. He said that trade was an EU competence and not an Irish one.

At lunchtime today, members of the Ireland-Israel Alliance staged a protest on Kildare Street urging senators to vote against the bill.

Jackie Goodall of the Ireland-Israel Alliance claimed Ms Black's bill was "discriminatory and it is not actually legal. It's against EU law, it's against American law.

"It says that it is targeting Israeli settlements in Palestinian territories all over the world, but actually it is just targeting the Jewish state. The only reason Fianna Fáil said it would vote for the bill is just populist and reactionary."

She added that her group "doubt very much that the bill will pass into law".

An emotional contribution from @SenDavidNorris speaking about the plight of Palestinians during a debate on the Occupied Territories bill in the Seanad pic.twitter.com/lBOjKGMf2I

Israeli Foreign Ministry spokesperson Mr Nahshon stressed the complexities of the political situation and said "the way to peace is through direct negotiations between Israelis and Palestinians".

He warned: "The initiative in the Irish parliament pre-judges the result of those negotiations and we will believe it will have a negative impact on the possibility of direct negotiations between Israelis and Palestinians.

"It is up to the parties to determine whether these territories will become a part of the future Palestinian state or not. It is totally not up to the Irish parliament."

Mr Collins said: "Really the status quo cannot pertain. Both the EU and the United States need to realise that.

"The Palestinian people and the two-state solution really is in question because the whole settlement building programme has continued."