The Cabinet has approved the appointment of six judges.

The move comes as the Seanad continues to debate the Judicial Appointments Bill.

With the Dáil rising for the summer at the end of the week, the Cabinet has been dealing with a lengthy agenda.

While the Government has avoided making any public comments on the dramatic political developments in the UK, there are concerns about any further delays on addressing the border issue.

The Government also wants to see further details of the British government's new position on Brexit.

Separately, Minister for Health Simon Harris was seeking Cabinet approval today for new legislation to provide for the regulation of abortion and give effect to the passing of last May's referendum.

The bill allows for terminations up to 12 weeks' gestation.

Speaking as he arrived at Government Buildings he said he cannot introduce the bill into the Oireachtas until challenges to the referendum result have been dealt with by the courts, but said he is working towards having services available by January next year.

The minister outlined plans to ban posters and protesters from areas around health facilities where abortions will take place.

Minister for Transport, Tourism and Sport Shane Ross was due to bring the National Sport Policy plans to Cabinet.

The plan aims to improve sports participation and promote women in sport as well as increasing funding across all levels from elite athletes to support volunteers.

Separately, Minister for Justice and Equality Charlie Flanagan was due to seek Government approval for a bill which will allow Irish citizens who are sentenced to a period of probation in another member state to return home and have their probation supervised by the Irish Probation Service.

It also applies to citizens from other countries serving probation here.

Minister Flanagan was also due to seek approval for an EU agreement which provides for an extradition system between Member States and Iceland and Norway based on the provisions of the European Arrest Warrant.

It is the first EU agreement to apply the provisions of the European Arrest Warrant to a third country.

A similar agreement will be drawn up to apply the provisions to the UK post-Brexit.

The agreement allows Iceland, Norway or the EU to make declarations in relation to grounds for non-execution of an arrest warrant.

There are very few offences for which Ireland will not execute a European Arrest Warrant issued by a member state.

Such grounds include prosecution for the same offence being taken in the executing state, double jeopardy or the offence having been committed in a place other than the issuing state.

It is proposed that Ireland will not execute an arrest warrant issued by Iceland or Norway in similar circumstances. 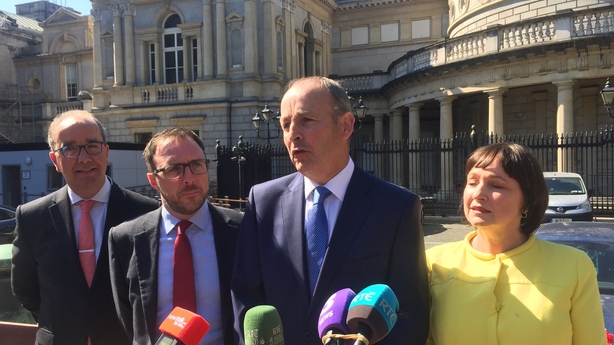 Meanwhile, Fianna Fáil leader Micheál Martin has reiterated that his party will negotiate and review the confidence and supply deal with the Government after the Budget.

He said there had been contact with the Government and they would probably meet in the coming week.

He said he had a workman's-like relationship with Taoiseach Leo Varadkar and Fianna Fáil had been very constructive in relation to Brexit and other issues.

Mr Martin also said that it makes sense and is prudent for Ireland to plan for all scenarios in relation to Brexit.

He said he welcomed the fact there was now a basis for negotiation with Britain. But he said it was critical that the British government published its white paper.

He also said from his conversation with former British foreign secretary Boris Johnson that he was never going to get the type of Brexit he wanted and he said he was not across the detail of Brexit.

Mr Martin has also stood by his decision to support Michael D Higgins for a second term of president. He said it was the best outcome for the Irish people.