The Government has agreed that Ireland will offer refuge to around 25 migrants who are currently on a boat stranded 30km off the coast of Malta.

The Lifeline boat has 234 migrants on board and has been refused permission to dock in a number of countries.

Taoiseach Leo Varadkar and Minister for Justice Charlie Flanagan have been in touch with Tánaiste Simon Coveney, who is in Luxembourg for a meeting of the European Union's General Affairs Council.

There, Mr Coveney has been liaising with his Maltese counterpart on the issue.

This has led to an agreement being reached with Malta that Ireland will be one of a number of EU countries to take the migrants once the Lifeline boat docks in Malta.

The boat is expected to dock there in the next 48 hours.

French President Emmanuel Macron said his country would take in some of those on board the vessel, but he also accused the rescue ship of "playing into the hands of (people) smugglers".

The Lifeline has been stranded for days in the Mediterranean without a port to dock at after picking up the migrants in distress off the Libyan coast last week.

The Maltese government has agreed to take in the Lifeline on condition that an agreement to distribute the migrants among EU member countries was reached.

Earlier, Mr Varadkar defended Ireland's role in the rescue of the migrants in the Mediterranean, amidst criticism of human rights abuses in Libyan detention camps.

In the Dáil Independent TD Seamus Healy raised reports of the Libyan Coast Guard intercepting people at sea and transferring them to Libya where they are being held in detention camps.

Mr Healy said the LÉ Niamh had recently rescued over 600 migrants, 294 of whom were put ashore in Italy.

He asked where the remaining 300 plus migrants were put and also sought assurances that none of them were transferred to the Libyan Coast Guard by the LÉ Niamh. 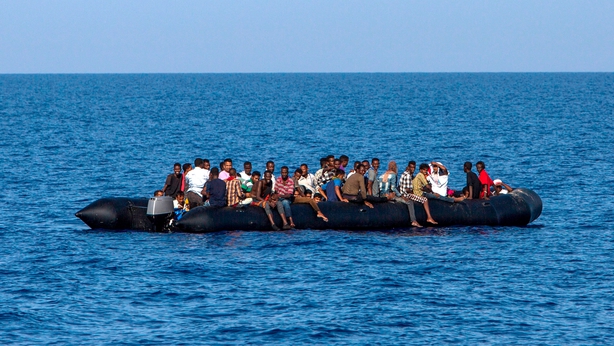 Leo Varadkar said he was advised that those who were rescued were transferred to other boats in Italy. He also defended the role of the Irish Naval Service in Operation Sophia - the EU's mission to rescue migrants in the Mediterranean.

"I am very proud of the work that our navy and our Defence Forces are doing in the Mediterranean, rescuing migrants from the Mediterranean sea, and training the Libyan Coast Guard to do what a Coast Guard should be able to do which is secure it's own seas," the Taoiseach said.

He also said the migrants crisis has had a large impact on the politics and public opinion across Europe.

Mr Varadkar also said the trafficking of migrants could not be encouraged.

"We need to step up border security. What is happening is really terrible. People are travelling huge distances and traffickers put them in dinghies and boats that are not sea worthy, knowing full well that European navies and others will come to the rescue," he said.

Mr Healy said reports of torture and rape of migrants in the camps were terrible, adding that human rights groups are accusing the Government of collusion in this process.