The Government will spend at least €1.5 million promoting the new development plan for the country called Project Ireland 2040.

The figures were released in response to several parliamentary questions asked by Sinn Féin, Labour and Fianna Fáil.

Most of the money for the campaign will come from the €5m allocated to the Government’s Strategic Communications Unit this year.

It has also been revealed that the cost of the launch of the document in Sligo IT almost a fortnight ago totalled more than €45,000.

Government described the promotion of the document as a year-long communications programme.

It will include regional launches, cinema advertisements and content published in national and local newspapers.

It was also confirmed in the answers to the parliamentary questions that some of the funding will come from other Government Departments and not just the SCU.

He said given that many parts of the plan had been announced before, this spending was an abuse of taxpayers' money.

The Taoiseach has described Project Ireland 2040 as the most important campaign the Government will run this year.

Mr Varadkar said it is part of the Government’s objective to improve citizens' understanding of what it is doing on their behalf.

A spokesperson for the Taoiseach said it cost a tenth of the €15m spent on a climate change campaign by the Fianna Fáil-Green Party coalition. 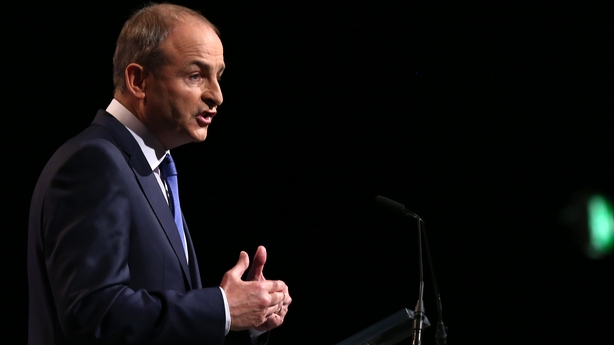 Read more: Controversy around Project 2040 adverts far from over

The Government was accused of politicising elements of the civil service with the advertising campaign for Project 2040 in the Dáil today.

Earlier, Labour TD Alan Kelly described reports by the Irish edition of The Times newspaper that an advertising company used by the Government instructed newspaper editors not to clearly identify various articles as advertorials, and instead pass them off as normal news stories, as "Third Reich, Goebbels territory".

Speaking during Leaders Questions in the Dáil, Mr Martin referenced a number of publications, including the Longford Leader and the Sunday World, which he said featured Fine Gael politicians along with the adverts.

"How did Fine Gael candidates end up in a Government advertisement paid by the taxpayer?" Mr Martin asked.

In response, the Taoiseach said the Strategic Communications Unit (SCU) operated in accordance with the civil service code.

Leo Varadkar also rejected the assertion that it was the most expensive Government advertising campaign, citing a climate change campaign run by the Fianna Fáil-Green government which he said cost €15m.

Mr Varadkar also defended the campaign, saying: "It is my view that good communications is a virtue. It is right and proper that the Government should [be] able to inform the public what it is doing, what's happening and how public money is spent."

The Taoiseach said the media organisations had control over the articles, and no one in the unit suggested who should be interviewed and they did not have sign off on the articles.

Speaking on RTÉ's Morning Ireland, Mr Kelly called for members of the Department of An Taoiseach's to appear before the Oireachtas Public Accounts Committee - of which he is a member - to defend the spending on the advertising campaign.

Mr Kelly said that the public was unable to distinguish between advertorials and articles. He added that this was dangerous to democracy.

However Mr Kelly said it was propaganda, using taxpayers' money, and was fundamentally about promoting the Fine Gael agenda.

This evening a Government spokesperson said it is an issue for the Secretary General of the Dept as to whether senior civil servants should appear before the PAC.

He also confirmed that a body made up of senior civil servants has an oversight role in relation to the SCU.