The Chairperson of the Citizens' Assembly has said that she is keen to see certainty at the end of an Oireachtas committee's consideration of the Eighth Amendment.

Ms Justice Mary Laffoy was speaking at the first public meeting of the all-party committee considering the Eighth Amendment, which acknowledges the equal right to life of the unborn and the mother.

Over the next three months, the Joint Oireachtas Committee on the Eighth Amendment will consider recommendations by the Citizens' Assembly for liberalisation of the grounds on which abortion is available in Ireland.

It will report back by mid-December, but finding a political consensus may prove difficult.

If a referendum is proposed, some believe it could be held early next summer.

Responding to Independents4Change TD Clare Daly, who noted that replacing the Eighth Amendment is complex, Ms Justice Laffoy stressed the importance of the committee in getting legal advice.

She said there are question marks over whether there were other implied rights for the unborn as distinct from the right to life, and she believed this was a factor in the assembly deciding there should be an express provision in the Constitution permitting the legislature to legislate in this area.

Later, Ms Laffoy was asked for further clarification on the matter by the Fine Gael TD Hildegarde Naughton. Ms Laffoy said legislation should not be open to constitutional challenge and the position should be certain. 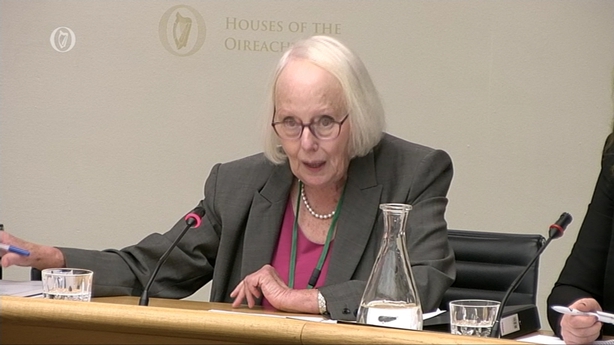 Ms Justice Laffoy, who is the first witness before the committee, gave an account of the processes underpinning the work of the 99-member group in its consideration of the Eighth Amendment.

She said she was aware that the results of the Citizens' Assembly caused surprise across some sections of society.

However, she said she believed they were not reached by "chance or accident" and members of the assembly followed a "thorough and rational" thought process when they voted.

"They took to their role with the utmost seriousness and dedication and carried it out with exceptional maturity, compassion and respect which is not always present in this debate," she added.

Ms Justice Laffoy said it was important to note that the issues which the members voted on were framed by reference to Article 40.3.3 rather than the terminology used in the Resolution of the Oireachtas "the Eighth Amendment of the Constitution".

She added that this was still her belief.

Ms Justice Laffoy said she did not underestimate the difficult task facing the committee in considering the topics further and stressed that the assembly does not, cannot and should not usurp the role of elected members of Dáil and Seanad Éireann.

She concluded her opening statement by noting that one of the most fundamental aspects of the Eighth Amendment is that it was introduced by the people at referendum.

"The people are the ultimate decision makers in terms of what provisions are inserted in or removed from our Constitution and what changes are made to it," she said.

No 'change or vibe' during Citizens' Assembly meetings

She was responding to Fianna Fáil’s Billy Kelleher, who asked if she thought the views and opinions of people changed over the course of the process.

He put it to Ms Justice Laffoy that there was no vote at the start and at the end of the Assembly process to compare the views of members.

Ms Justice Laffoy said she did not notice a change in mood over the process or any "vibe" in relation to any topic in particular.

The Secretary to the Assembly Sharon Finegan noted that the Assembly requested feedback in relation to the issues of life-limiting condition and rape.

The Citizens' Assembly did not cover the issue of abortion pills sufficiently, according to Ms Justice Laffoy.

Responding to the Sinn Féin’s Louise O'Reilly, the chairperson of the Citizens' Assembly noted that the HSE crisis pregnancy agency published statistics showing the number of women going to the UK and the Netherlands for terminations had reduced.

She pointed out that last May the HSE website stated that research showed that an increasing number of women on the island of Ireland were making contact with online abortion pill providers.

"I'm concerned about that", she said.

She ended the committee hearing by offering her assistance if its required over the coming months.

She said her view was to repeal article 40.3.3 and give the Oireachtas power to legislate.

She said: "I think it would bring the most certainty but I strongly recommend that you get legal advice on that topic."