Researchers believe that modern mathematical techniques have shed new light on a centuries-old debate about Ireland's Viking age and the Battle of Clontarf.

There has been a long-running debate among historians over why the 1014 battle was fought and what forces were involved.

The widespread view is that the battle was the climax of a war between the Irish and Vikings with Irish victory, under Brian Boru's leadership, breaking Viking power in Ireland.

But revisionist historians believe it was instead a conflict between opposing Irish sides with Munster and its allies victorious over Leinster and Dublin, and Viking warriors on each side.

Researchers in England have now analysed medieval texts using what they say is a mathematical approach similar to that used to analyse connections between people on social-networking websites.

Their findings support the long-standing popular view that the Battle of Clontarf was the climax of a war mainly between the Irish and Vikings, contrary to the revisionist view that it was an Irish civil war.

The research from Coventry, Oxford and Sheffield Universities, including an Irish theoretical physicist, is published in the journal Royal Society Open Science.

Speaking on RTE's Morning Ireland, lead author Professor Ralph Kenna, a theoretical physicist at Coventry University, said: "We looked at an ancient text, which described the Viking age in Ireland and the events leading up to the Battle of Clontarf.

"In that text there are something like 300 characters and there's over 1,000 interactions between these characters.

Prof Kenna added: "The medieval composer of the text certainly did not think in terms of social networks but, in recording a cast of hundreds with well over a thousand connections between them, he imprinted them into the narrative.

"This is why the networks approach delivers unique new insights; it extracts an unintended message.

"The paper goes beyond previous works in that it generates a new quantitative element to the complexity and conflicts of a long-standing debate about the Viking age in Ireland."

Network science: How the study was carried out 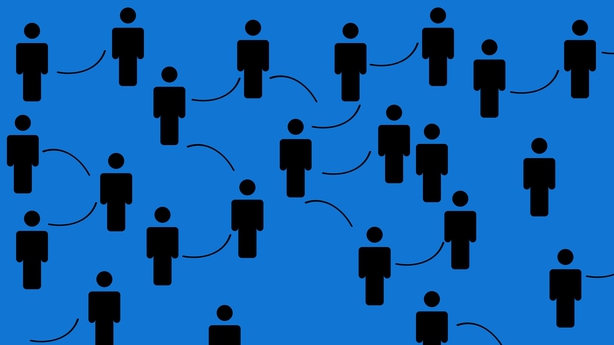 Academics analysed how all the Irish and Viking characters in the text fit together in a network, monitoring whether the interactions between them were benign or hostile.

They developed a mathematical measure to quantify whether hostility in the network mainly connected Irish to Irish or Irish to Vikings.

They then calculated the difference between the measure of hostilities between each type of character (Irish and Viking) and what would have been hostile interactions in the network, indiscriminate of whether characters were Irish or Viking.

A positive value of the resulting measure would signal Irish civil war and a negative number would reflect an Irish versus Viking conflict.

The results gave an overall negative value suggesting that the text mainly describes an Irish against Viking conflict.

However, because the negative value was moderate (-0.32 on a scale from -088 to 1) they suggest the text does not describe a fully "clear-cut" Irish versus Viking conflict. Instead, the network portrays a complex picture of relationships and social networks of the time.