The prospect of an early general election is a real possibility as a standoff between Fianna Fáil and the Government over the garda whistleblower controversy continues.

The Taoiseach last night told his parliamentary party that he does not want an election but said he will stand by Tánaiste Frances Fitzgerald following calls for her resignation from Fianna Fáil and Sinn Féin.

Fianna Fáil this morning lodged a motion of no confidence in the Tánaiste for debate on Tuesday.

"The Tánaiste should step aside, in our view, and that would avoid a general election.

"I've no difficulty meeting with the Taoiseach in relation to this. But he knows our position...

"There was a big failure here to stand by the character of Maurice McCabe." 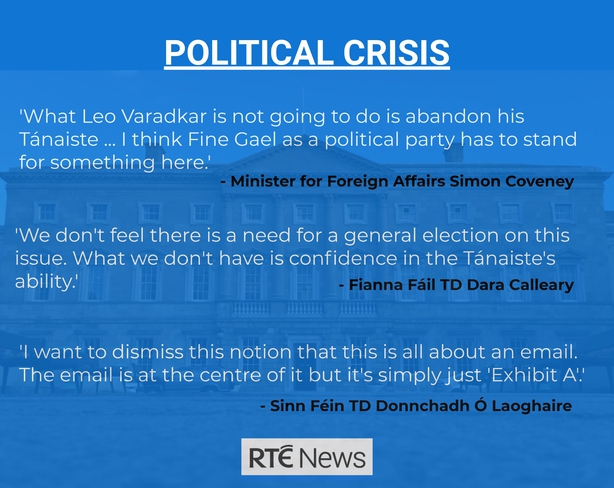 "The last thing I want to do is be going around to the doors in Limerick during Christmas competing with carol singers ... I hope a general election can be avoided, but if it can't be avoided, so be it."

"It's just a game of gamesmanship at its worst and I'm really appalled at the behaviour that I've seen over the past two days."

"I don't believe the explanation that the minister has given of what happened around the email; it's not satisfactory.

"On the other hand, I'm not sure the public will thank us if there's an election before Christmas. So it's a thorny dilemma really."