The bishop of a diocese in Nigeria where 40 parishioners were shot dead earlier this month has criticised President Michael D Higgins for his comments on the incident.

Authorities suspect insurgent group Islamic State West Africa Province (ISWAP) carried out the massacre at St Francis Church Owo in Ondo State on Sunday, 5 June, however no group has as yet claimed responsibility.

Assailants wielding AK-47 rifles and explosives attacked the congregation at the church, in southwestern Ondo State, during mass, leaving behind a scene of carnage as they escaped.

Eighty-seven people were also injured in the attack, with 61 still in hospital.

Last week, President Michael D Higgins expressed his condolences with the families of those killed and injured in the shooting.

In a statement, President Higgins said that such an attack was made in a place of worship "is a source of particular condemnation, as is any attempt to scapegoat pastoral peoples who are among the foremost victims of the consequences of climate change".

"The neglect of food security issues in Africa, for so long has brought us to a point of crisis that is now having internal and regional effects based on struggles, ways of life themselves," President Higgins said. 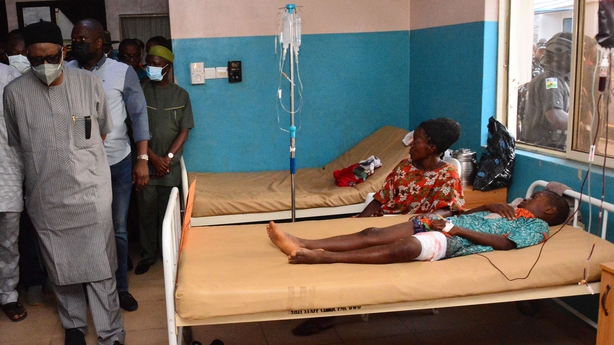 "To suggest or make a connection between victims of terror and consequences of climate change is not only misleading but also exactly rubbing salt to the injuries of all who have suffered terrorism in Nigeria," Bishop Arogundade said in a statement posted to social media.

"Alluding to some form of politics of climate change in our situation is completely inappropriate.

"Such comments associating banditry, kidnapping and gruesome attacks on innocent and harmless citizens of Nigeria with issues concerning climate change and food securities are deflections from the truth."

The bishop said that it is "the responsibility of every one of us to take case of our earthly home," but added that he appeals to "those who are trying to take advantage of this horrific event to project any form of ideological agenda to desist from such opportunism".

He added in his statement that "Irish men and women laid the foundation of the faith for us in this part of the world," so the comments from the President of Ireland are important to him.

The community is still mourning all loved ones lost in the "satanic" attack, Bishop Arogundade said.

"The victims of terrorism and indeed all the people of Nigeria would be thankful if world leaders propose fruitful ideas to the government of Nigeria on how to protect the citizens and make Nigeria a safe place to live." he added.

"This would be a better way of honouring the victims of hate and putting an end to the increasing killings."

There have been an increasing number of outbreaks of violence in recent years between Fulani herdsmen seeking land for their cattle to graze on and farmers from other ethnic groups seeking to shield their lands.