Retired RTÉ broadcaster Charlie Bird has said he is blown away by the response to his charity mountain climb which has so far raised over €2m.

The former chief news correspondent, who was diagnosed with motor neurone disease last year, set himself the goal of hiking to the top of Croagh Patrick in Co Mayo.

His challenge caught the imagination of the public and thousands of people completed their own 'Climb with Charlie' events all over Ireland and further afield yesterday.

Today, Charlie said on Twitter that over €2 million in donations had been received.

Extending the hand of friendship is our motto for climbwithcharlie

I can officially confirm we have gone over the two million euro mark in donations. The money raised at the Dunnes Stores tills has brought us there. Let's keep donating. We might reach two and a half million pic.twitter.com/lM9SterXDL

The 72-year-old raised his climbing stick in triumph as he reached the top of 'the Reek' yesterday.

Charlie was accompanied by his wife Claire and daughters Orla and Neasa.

"I am truly humbled and inspired that so many thousands of people took part in Climb with Charlie events across the world," he said.

"I want to thank people all across the country for their incredible support throughout this journey. 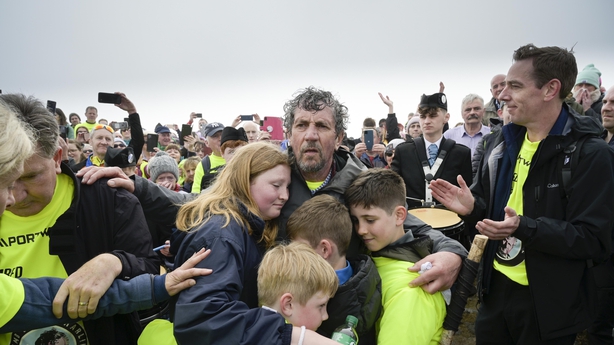 "All of the generous donations will go to the two charities which are so close to my heart. It is an amazing gesture of support for me and my family.

"Throughout this campaign, we have had the support of so many wonderful people and organisations, and I would like to thank them from the bottom of my heart.

"I would also like to particularly thank the Defence Forces, An Garda Síochána, Mayo Mountain Rescue, the Order of Malta and all our local volunteers for making our climb today possible."