Several hundred people have taken part in a protest outside the Russian Embassy in Dublin, calling for an end to the invasion in Ukraine.

The event was organised by members of the Ukrainian community in Ireland, who staged a similar demonstration yesterday.

Orwell Road in Rathgar, where the embassy is located, was closed to traffic during the protest with diversions in place, after large crowds turned out.

A diplomatic car, attempting to enter the embassy, was blocked by protesters and partially draped in a Ukrainian flag.

Many of those in attendance sang the Ukrainian national anthem, amid calls for an immediate ceasefire and for further sanctions on Russia.

"I couldn't help my parents in Ukraine. My heart is broken."

Members of Ukrainian community in Ireland have gathered at the Russian Embassy in Dublin to protest the military invasion of their country. #Ukraine pic.twitter.com/OYkIBNcvkK

Citizens of a number of countries in Eastern Europe attended the protest in solidarity with their neighbours.

Many Irish people also turned out to voice their concerns at the situation in Ukraine.

The organisers said they "condemn Russia for invading a sovereign country with its military troops".

Several hundred people turned out for the protest at the Russian Embassy in Dublin. The road had to be closed due to the large numbers. Ukrainian people joined by Irish and other nationalities including people from Russia, Belarus, Georgia and Lithuania @RTENews #UkraineRussia pic.twitter.com/9yD0CvdvPj

An emotional Ukrainian native who attended the protest said she was "very scared".

"I worry about my family. I have a son and children and friends."

Another citizen of Ukraine living in Ireland urged people to pray for his country's army.

He said "no one is safe in Ukraine now, no one is OK" and he appealed for support for the army.

A young man, who was translating for his parents, said "Russians are killing Ukrainian people and that is not OK for us." 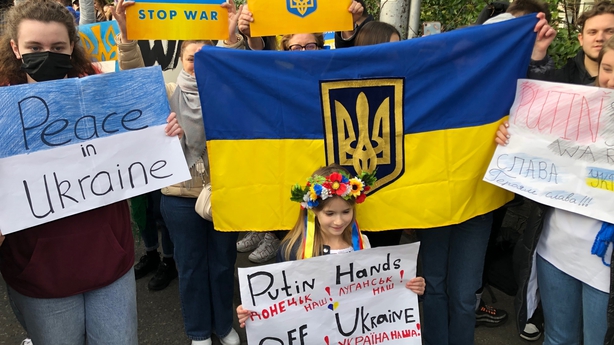 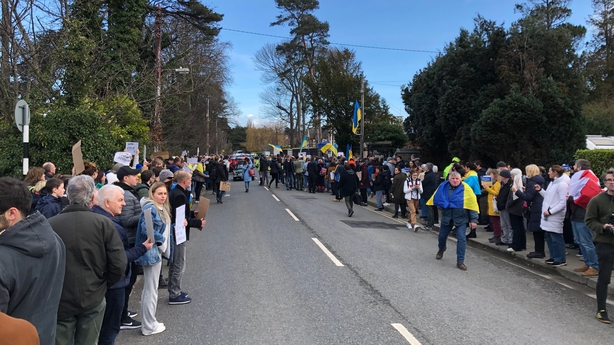 While another man told RTÉ News that "many people are dying for nothing".

One teenage girl described how she has relatives who are "hiding from bombs".

She said her cousin "went outside to play and he saw rockets going towards Kyiv".

In response to the Irish Government's decision to immediately lift the requirement for visas between Ukraine and Ireland, one woman said "of course if it would be possible I would bring them here" but she said she cannot reach her family.

Another girl said she was "angry that people have to flee Ukraine to simply survive".

She said "it is our country, why should we be leaving".

According to another woman, it is not possible now to leave parts of the country.

She said "if you want to leave Kyiv, it's too late, Kyiv has been surrounded and it's impossible." 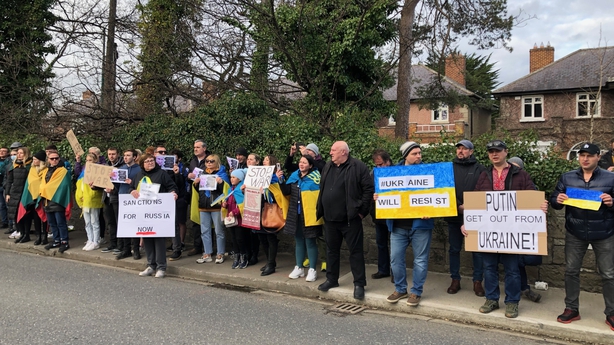 A man from Belarus, who is now living in Ireland, said "we have to make all the efforts in order to stop this barbarian attack".

He said what is happening is "unacceptable in the 21st century".

A woman who is originally from Tbilisi in Georgia said she attended the protest "to support the Ukrainian people and do my bit to stop the war".

She said "this has to stop, the bombing and killing has to stop" and she said "in any context this is not right".

While a member of the Lithuanian community in Ireland said it was important to attend the protest "to show support for Ukraine".

He said Lithuania had long warned that "Putin was a threat to peace in Europe" and he said "it is time to stop him."

The Russian ambassador to Ireland Yury Filatov has defended the Russian invasion of Ukraine and told RTÉ News that diplomatic efforts to resolve what he described as the "humanitarian tragedy in Donbas" had failed.

When pushed on the issue, he said: "It was not our preferable choice... We tried all efforts to settle things politically through the Minsk process."

"They have failed. It all became clear that Kyiv just did not want to settle that in the format of the Minsk agreements, let alone talk directly to the republics."

"They simply used this diplomacy as a cover to prepare an offensive from the Donbas region."

He said that the Ukrainian government has been waging a war against the people of Donbas and Luhansk since 2014.

"What we are talking about is the sad truth that the war has been going on in Donbas for almost eight years, waged by the Kyiv regime against the people of Donbas and Luhansk, Donbas and Luhansk republics," he said.

When it was put to him that Russia has been arming the separatists in these regions, he said: "We did not. That has been started by the government, which came to power in 2014, in February."

"The only reason was that the people in the republics in the region at that time, they simply rejected that they have not accepted the new regime, which was all about Ukrainisation.

"They wanted to keep their language, which is Russian, to speak it, to live their own way of life."

Mr Filatov insisted that the Russian invasion of Ukraine is a "humanitarian intervention".

He said: "There was no other choice to end the suffering of Donbas through real humanitarian intervention. That is what this special operation is exactly about."

He added: "The only aim of the operation is to neutralise the ability of Ukrainian military to inflict any more suffering on Donbas. Ukrainians should not be afraid of that."

He insisted that civilians are not the target.

When asked if he believed that he should be expelled from Ireland, Mr Filatov said: "It's a good question. You might ask your Government. It's up to them. I can leave anytime."

Sinn Féin Leader Mary Lou McDonald has called for the expulsion of the Russian Ambassador to Ireland.

She said: "It is clear that significantly strengthened sanctions on Russia are needed. The situation has now reached a point where this must include the expulsion of the Russian Ambassador to Ireland."

Ireland may reduce Russian diplomats 'down to a trickle'

Tánaiste Leo Varadkar has said Ireland may look at reducing the 20 Russian diplomats in Ireland "down to a trickle", and have it in line with the amount of Irish diplomats in Russia, which is three or four.

Mr Varadkar branded Vladimir Putin the "Hitler of the 21st century" during the interview.

"We knew that Putin was a bad man. We've known that for a long time now, but we didn't think that he would be the Hitler of the 21st century and I think he's putting himself into that space," Mr Varadkar said.

He insisted that Ukraine has a right to territorial integrity.

"At the outset, I want to condemn the Russian Federation's aggression towards Ukraine. It's more than an incursion. It is an invasion. To say that the Irish Government fully supports Ukraine, its right to democracy, territorial integrity, self determination and its right to follow a European path which is to join the EU and NATO if it wishes to do so," he said.

All NATO intelligence indicated that there would be an incursion, he said, but it seems that what Russian President Vladimir Putin is planning is "at the more extreme end of that".

The invasion could create a refugee crisis as people are forced to flee their homes in Ukraine, he added.

Leinster House in Dublin was tonight lit up in the colours of Ukraine - in a show of solidarity with Ukrainian people | https://t.co/yw1mh1krIz pic.twitter.com/PjX1zjJXA6