The city's residents were told by the defence ministry to make petrol bombs to repel the invaders, and witnesses this evening reported hearing artillery rounds and intense gunfire from the western part of the city.

President Volodymyr Zelensky filmed himself with aides on the streets of the capital, vowing to defend Ukraine's independence.

Some families took to shelters after Kyiv was pounded for a second night by Russian missiles.

Others tried desperately to get on packed trains headed west, some of the hundreds of thousands who have left their homes to find safety, according to the United Nations' aid chief.

After weeks of warnings from Western leaders, Mr Putin unleashed a three-pronged invasion of Ukraine from the north, east and south yesterday, in an attack that threatened to upend Europe's post-Cold War order.

"I once again appeal to the military personnel of the armed forces of Ukraine: do not allow neo-Nazis and (Ukrainian radical nationalists) to use your children, wives and elders as human shields," Mr Putin said at a televised meeting with Russia's Security Council today.

"Take power into your own hands, it will be easier for us to reach agreement."

Moscow said it had captured the Hostomel airfield northwest of the capital - a potential staging post for an assault on Kyiv that has been fought over since Russian paratroopers landed there in the first hours of the war.

This could not be confirmed and the Ukrainian authorities reported heavy fighting there.

"Shots and explosions are ringing out in some neighbourhoods. Saboteurs have already entered Kyiv," said the mayor of the city of 3 million, former world heavyweight boxing champion Vitali Klitschko.

"The enemy wants to put the capital on its knees and destroy us." 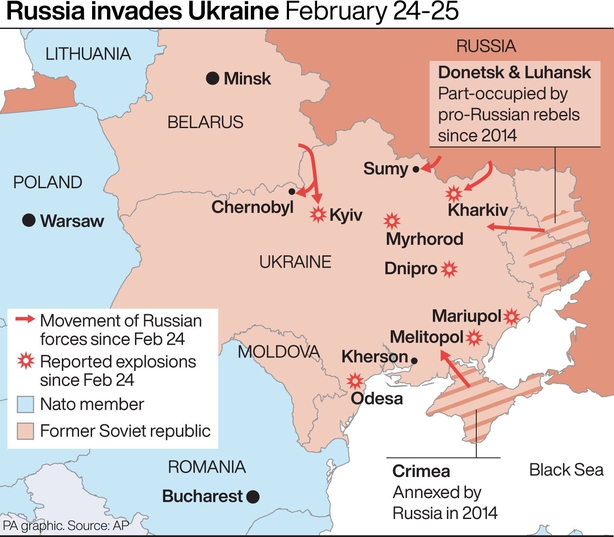 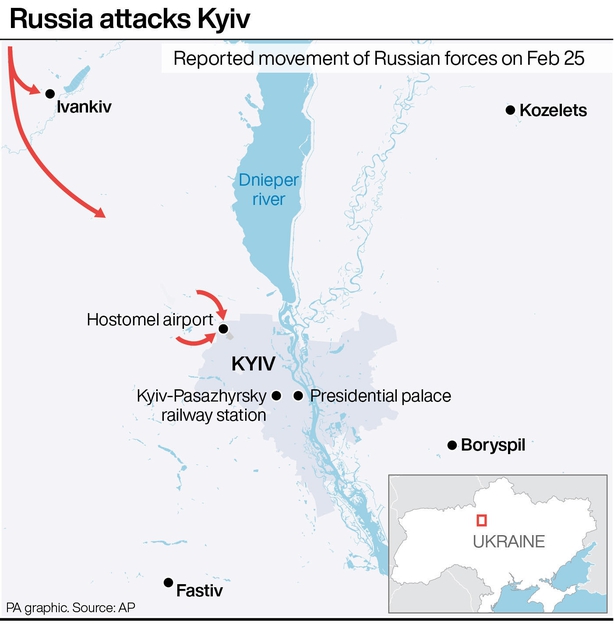 Amid the chaos of war, a picture of what was happening on the ground across the country - the second largest in Europe after Russia itself - was slow to emerge.

Mr Zelensky tweeted that there had been heavy fighting with deaths at the entrance to the eastern cities of Chernihiv and Melitopol, as well as at Hostomel.

"Glory to our defenders, both male and female, glory to Ukraine," he said, flanked by the prime minister and advisors in a video posted to confirm he was in the capital.

Witnesses said loud explosions and gunfire could also be heard near the airport in Kharkiv, Ukraine's second city, close to Russia's border, and air raid sirens sounded over Lviv in the west.

Ukraine's military said Russian troops had been stopped with heavy losses near the northeastern city of Konotop.

Britain's defence ministry said Russian armoured forces had opened a new route of advance towards the capital after failing to take Chernihiv.

Ukraine said more than 1,000 Russian soldiers had been killed so far. Russia did not release casualty figures.

US Secretary of State Antony Blinken spoke to his Ukrainian counterpart and condemned reports of mounting civilian deaths, including those of Ukrainian children, due to attacks around Kyiv, the State Department said.

United Nations aid chief Martin Griffiths said hundreds of thousands of people were on the move in Ukraine, adding that "north of a billion dollars" would be needed for relief operations in the next three months.

Ukraine has banned men of fighting age from leaving, and at borders with Poland, Romania, Hungary and Slovakia, those seen crossing by Reuters journalists were mostly women and children.

Women cried as they bade goodbye to male loved ones and crossed into Romania.

The 27 members of the European Union agreed to freeze any assets in the bloc belonging to Russian President Vladimir Putin or Foreign Minister Sergei Lavrov, and Britain followed suit.

But they have so far stopped short of forcing it out of the SWIFT system for international bank payments, drawing criticism from Kyiv.

The European Broadcasting Union shut Russia out of the widely watched Eurovision Song Contest for 2022.

Air raid sirens sound in Kyiv for a second day

Vladimir Putin says Ukraine, a democratic nation of 44 million people, is an illegitimate state carved out of Russia, a view Ukrainians see as aimed at erasing their more than thousand-year history.

Ukrainians voted overwhelmingly for independence at the fall of the Soviet Union and Kyiv hopes to join NATO and the EU -aspirations that infuriate Moscow.

As air raid sirens wailed over Kyiv for a second day, some residents sheltered in underground metro stations.

Windows were blasted out of a 10-storey apartment block near the main airport.

A two-metre crater showed where a shell had struck before dawn.

"How can we be living through this in our time? Putin should burn in hell" said Oxana Gulenko, sweeping broken glass from her room.

Hundreds crowded into a cramped bomb shelter beneath one building after a televised warning of air strikes.

"How can you wage a war against peaceful people?" said Viktoria, 35, as her children aged five and seven slept in their winter coats.

When a train arrived, people rushed the doors, some screamed, and guards fired blanks to scare the crowd away.

Maria, 30, had been there since the morning with her child, husband and dog, trying and failing to board the trains.

"It's dangerous to break through the crowd with a kid," she said.

Read more:
Follow live updates as they happen
Russia may have captured Chernobyl because 'it was just in the way'
How has it come to war in Ukraine?
Ukrainian refugees camp out at Polish train station