The tradition of a bowl of shamrock being presented to a US president on St Patrick's Day will be continued this year, even though the event will be virtual.

The crystal bowl, which this year was made by Criostal na Rinne in County Waterford, is already at the White House and was delivered there on Friday by Irish embassy staff.

The shamrock bowl will be placed on President Joe Biden's desk during his virtual St Patrick's Day meeting with the Taoiseach Micheál Martin on Wednesday.

Discussions are expected to cover a broad agenda of issues, including the deep ties between the US and Ireland, Covid-19 and shared global challenges, such as climate change.

The Taoiseach will also use the opportunity to thank President Biden for the US's ongoing support for the Good Friday Agreement.

On Wednesday morning, the Taoiseach will meet Vice President Kamala Harris and both will then engage with the inaugural class of Frederick Douglass Global Fellows.

The 20 American students from minority backgrounds have been selected to visit Ireland later this year. 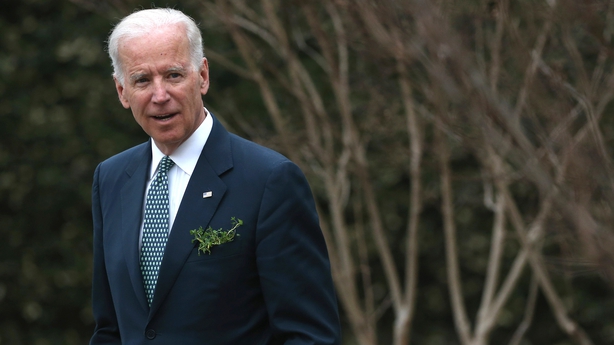 Also on Wednesday, the Taoiseach will have a virtual meeting with Speaker of the House Nancy Pelosi, as well as members of the US Congress Friends of Ireland Caucus, who mark their 40th anniversary on St Patrick’s Day.

On Monday, Mr Martin will deliver a virtual address to the Washington-based Brookings Institution.

That evening, he will speak at the US launch of a new book about the Kennedys and Ireland: 'From Whence I Came: The Kennedy Legacy, Ireland & America'.

On Tuesday, the Taoiseach will attend virtual round table events hosted by the US Chamber of Commerce, Enterprise Ireland, and the IDA.

Parades may be virtual this year, but the great city of Chicago has retained one of its most stunning #StPatricksDay traditions. https://t.co/Pu2E9H7zfR

Later that evening, he will speak at a public event hosted by the Congressional Friends of Ireland Caucus in association with the Pat & John Hume Foundation, and the Embassy of Ireland.

It commemorates John Hume and the pivotal role he played in garnering US support for the peace process.

Speaking in advance his virtual US visit, the Taoiseach said that the period around St Patrick’s Day is when the country traditionally celebrates the relationship between the US and Ireland.

Mr Martin said: "I look forward greatly to meeting President Biden, who has a very special connection with Ireland, and to bring him greetings from Ireland on this his first St Patrick’s Day in office as president.

"I will thank him personally for his unstinting support for Ireland over many years, including in recent times for his support in helping to secure a positive outcome in the Brexit negotiations, as we face into the task now of making those new arrangements work well."

Last night, the White House issued a statement saying the meeting between the US President and the Taoiseach would reaffirm the deep, historic partnership and "extraordinary people-to-people ties" between the US and Ireland.

"Although the pandemic prevents the traditional White House celebration of St Patrick’s Day this year, we look forward to marking this holiday and our close relationship with Ireland in a safe way," it said.

Our Taoiseach @MichealMartinTD will join @margbrennan on @FaceTheNation tomorrow ahead of his #StPatricksDay meetings at the @WhiteHouse & Capitol. https://t.co/SXMhJ6Y4i4

US gun violence makes a return to global headlines