The Taoiseach has told the Dáil that he intends to meet party leaders to assess the controversy surrounding Supreme Court judge Mr Justice Seamus Woulfe.

Micheál Martin said it was a very serious issue and was fundamental to the separation of powers, and is at the heart of the Constitution.

He also said the Oireachtas must respond in a considered and sensitive way.

Opposition politicians have called for the matter to be addressed by the Oireachtas, following the release of correspondence showing that Chief Justice Frank Clarke told Mr Justice Woulfe he should resign.

Mr Calleary and Mr Hogan both subsequently resigned, as did Jerry Buttimer, who stepped down as Seanad Leas-Cathaoirleach.

Earlier, the Government said it would "continue to reflect" on the correspondence between the Chief Justice and Mr Justice Woulfe, which was published yesterday.

In a statement, the Government said that the Attorney General had "outlined the serious constitutional issues that now arise and the respective responsibilities of each of the organs of the State as set out in the Constitution, including in particular the respective roles of the Judiciary and of the Oireachtas".

It said the Government was "acutely aware of the sensitivity and seriousness of the issues" and that there was a "need to ensure that the constitutional framework is fully respected by all concerned".

The Government has said it will "continue to reflect" on the correspondence between the Chief Justice and Mr Justice Seamus Woulfe, which was published yesterday. | https://t.co/SAi1lDChby pic.twitter.com/c6SvmFrL4j

Mr Justice Clarke said the cumulative effect of the controversy had caused significant and irreparable damage to the Supreme Court.

He told Mr Justice Woulfe that these were matters that affected public trust and his personal view was that Judge Woulfe should resign to maintain public confidence in the court, the judiciary and the administration of justice.

Mr Justice Woulfe said he would accept sanctions proposed by the Chief Justice to the effect that he would be reprimanded and would not sit on the court until February.

He has suggested giving his salary for that period to charity. The Chief Justice said he should waive or repay it.

However, Mr Justice Woulfe said he had come to the conclusion that he should not resign.

He said he did not think any of the reasons put forward constituted grounds for his resignation, let alone judicial misconduct and outlined his points of disagreement in a nine-page letter.

Opposition politicians have called for the matter to be addressed by the Oireachtas.

Ceann Comhairle Seán Ó Fearghaíl tells Dáil that members must not comment on Seamus Woulfe matter inside or outside the house in any way that could rise to perception of bias as they may ultimately have to adjudicate on it.

Meanwhile in the Dáil, Labour Leader Alan Kelly said that it is obvious there is other unpublished correspondence between the Chief Justice and Mr Justice Woulfe.

He requested through the Attorney General to ask if this correspondence can be published.

The Taoiseach said the wise thing to do would be for party leaders to meet first and see if things can be agreed collectively.

Woulfe controversy has 'probably dragged on for too long'

The Chair of the Oireachtas Justice Committee has said the controversy surrounding Justice Woulfe has "probably dragged on for too long".

Fianna Fáil TD James Lawless told RTÉ's News at One that it was "a concern that the continuation of this affair may begin to erode into that public confidence, through no fault of the vast judiciary but because of the unseemly nature of the affair".

"I think it would be helpful if all parties were to reflect carefully on what's in the offing. I see some proposals for a meeting of minds, or a meeting of leaders perhaps and I think that seems like a reasonable sensible suggestion."

He added that "to move slowly and carefully would be the order of the day". Mr Lawless urged all involved to proceed with caution and to "talk to each other and tease it out".

He said if impeachment were to take place, a motion would have to be passed in both houses, the Dáil and the Seanad, and "that would have to go through and effectively call for the removal of a judge from office", which he said has never happened before.

Mr Lawless said it was most likely that a select committee would be formed and all parties, including the judge himself, may be invited to come before that committee.

The Minister of State for International and Road Transport, Hildegarde Naughton, said the issues raised in the correspondence between the Chief Justice and Seamus Woulfe are a "key priority" and are being dealt with at the highest level in Government.

Speaking on RTÉ's Drivetime, she said it was a very serious constitutional issue and must be dealt with appropriately.

It would be 'disproportionate' for Seamus Woulfe to be sacked

Professor Tom O'Malley, a law lecturer NUIG, said he believes it would be disproportionate for Seamus Woulfe to be sacked from Supreme Court.

Speaking on RTÉ's Prime Time, Prof O'Malley said the main concern at the moment is not the 'golfgate' controversy, but Seamus Woulfe's response to it.

He also said if the letters had not been released, the "temperature might have been lowered."

He said if removal proceedings were instigated in the Oireachtas, and if judge Woulfe challenged any aspect of them in the courts, there would be "the difficulty that he would be challenging them before the Supreme Court."

"Most members of the Supreme Court had expressed the view that he [Woulfe] should resign", Prof O'Malley added. "That would give rise to quite a conundrum regarding whether he would get a fair hearing in those circumstances."

Mr O'Malley said it is a very tricky situation and it's "hard to see what the solution is if Mr Justice Woulfe was to remain in office".

Former minister Shane Ross said he believe it could have been the intention of the judiciary to send this problem "over to Leinster house so they didn't have to deal with it".

"The Important thing we have to look at is what game is being played here?" Mr Ross added.

He said that if he was in Cabinet, he would be reminding ministers what had happened.

"Are they trying to take the spotlights off themselves and move it across to the Dáil?"

Mr Ross said the judiciary "didn't necessarily have to do a u-turn" and he believes they did something "calculated to calm things down under the Ms Justice Denham review, which concluded Mr Justice Woulfe shouldn't resign, and now they are refusing to accept that particular review".

Prof Tom O'Malley said he didn't see it as a case of the judiciary "passing the buck over to the legislature" because there is not very much the judiciary can do in this case.

Mr Ross believes TDs need to look at "how judges are appointed and why they are untouchable and can't be removed". 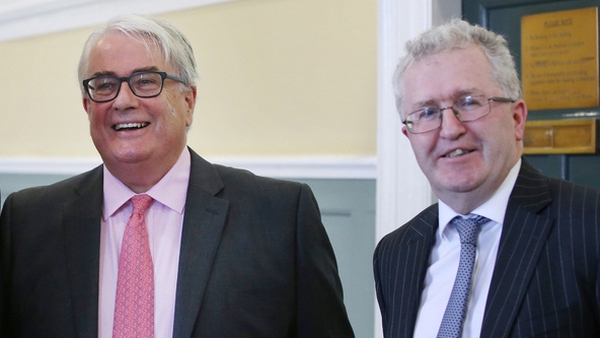 Read in full: Letters between Chief Justice and Seamus Woulfe