In the autumn of 1845 – an extraordinary American arrived in Ireland, his name was Frederick Douglass.

He came here to promote a movement dedicated to the abolition of slavery and the movement couldn't have had a more appropriate ambassador.

Douglass himself had become a slave in Maryland at the age of six and bore the scars on his back as a testament to the brutality of slave life.

It was two years before the worst effects of the Great Famine would ravage Ireland but cities like Cork were prosperous.

Cork was also home to a number of anti-slavery societies.

Quakers were particularly exercised by what they had learned of the international slave trade between Africa and the New World and the treatment of slaves in America.

It was they who facilitated his visit here and provided him with accommodation and the means to travel.

What would have made Douglass an extraordinary presence in Ireland was the fact he was a powerful and self-educated orator, a voice for the dispossessed and an international advocate.

He was also handsome and charismatic, while unyielding in his beliefs and message.

Records from the time indicate he was enthusiastically received by large audiences in Cork, Belfast to Dublin, Limerick, Waterford and Wexford, among other places.

One of his most memorable speeches was made about the celebration of American Independence Day on 4 July, when he confronted the public with the contrasted reality of freedom and slavery - a speech that cemented Douglass' stature as an advocate for black rights.

He said: "What, to the American slave, is your 4th of July? I answer, a day that reveals to him, more than all other days in the year, the gross injustice and cruelty to which he is the constant victim.

"To him, your celebration is a sham, your boasted liberty, an unholy license, your national greatness, swelling vanity, your sound of rejoicing are empty and heartless, your denunciation of tyrants brass fronted impudence, your shout of liberty and equality, hollow mockery, your prayers and hymns, your sermons and thanksgivings, with all your religious parade and solemnity, are to him, mere bombast, fraud, deception, impiety, and hypocrisy -- a thin veil to cover up crimes which would disgrace a nation of savages.

"There is not a nation on the earth guilty of practices more shocking and bloody than are the people of the United States, at this very hour."

Douglass was born to a slave woman, Harriet Bailey, from whom he was separated shortly after birth, as was the practice with slaves.

As a young slave boy, the wife of his "owner" began to teach him to read and write before her husband called a halt to his education.

He would later cajole white boys into providing him with reading material. To be learned was to be free, he later wrote.

"I can truly say, I have spent some of the happiest moments of my life since landing in this country. I seem to have undergone a transformation. I live a new life.

Douglass became close to Daniel O'Connell, champion of Catholic Emancipation and who was known as The Liberator.

O'Connell was an avowed abolitionist and, through their friendship, Douglass became known as the "Black O'Connell".

To understand slavery, it is also necessary to understand the economy of the Southern United States at that time.

Cotton was a hugely profitable commodity, replacing tobacco as a main cash crop. The Southern States at the time produced most of the world’s cotton. The trade was worth more than that of the entire United States.

But cotton crops needed labour and lots of it. By owning slaves, plantation owners and farmers could produce cotton with little cost. Having bought slaves, these slaveholders could generate huge profits without having to pay wages.

On this map of the United States from 1857, the concentration of slave populations is markedly shown in southern States. Douglass was one of the lucky ones to escape the tyranny.

Arriving in New York through a slave passage known as the underground railway, he began his activism in earnest.

Behind him, he left a system that saw slaves being traded in the same way as cattle or horses, just a more expensive but very valuable commodity.

One former slave, Fountain Hughes, described in 1949 how he and others were placed on the slave auction block and sold "just like animals" 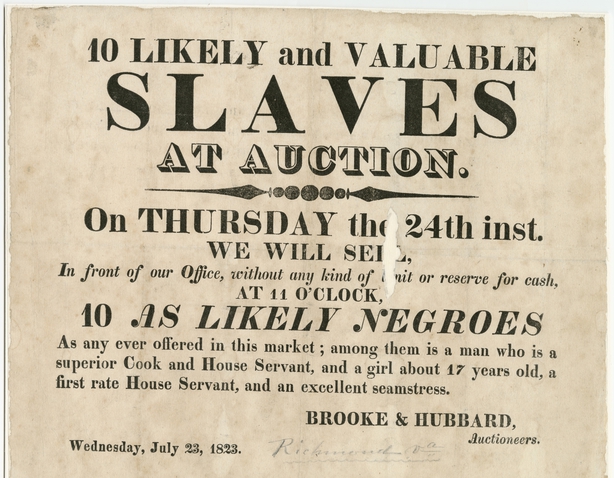 Douglass was a non-drinker and was championed in Cork by the temperance movement founder, Father Theobold Mathew.

Having been close to Fr Mathew, their relationship soured and Douglass would denounce the anti-drink campaigner as a result of his failure to condemn slavery when Mathew visited the United States.

Many Irish in America were either pro-slavery or were at least antipathetic to black people and slaves. Many feared their jobs and opportunities would be taken if slaves were free to join the workforce.

Today, Frederick Douglass’ legacy is important to black people around the world.

As a result of the resurgence of the Black Lives Matter campaign, a statue of Douglass was among those attacked and toppled in a backlash.

Although the statue of Fr Mathew still stands on Cork’s Patrick Street, there is no such monument to Douglass.

There’s now a public campaign to have him recognised in the city with a public space named after him. It has already attracted thousands of signatures.

After his sojourn in Ireland and Britain, Frederick Douglass went on develop a relationship with Abraham Lincoln and was given a number of political administration roles, including that of representative of the United States in Haiti.

As an academic, journalist, administrator, writer and orator, Douglass never let up on his missions to agitate and emancipate.

He died of a suspected heart attack at his home in Washington at the age of 77, no one is certain of his age because, like other slaves, he was never allowed to know his true age.

You can see Donal Byrne's Nationwide programme on Frederick Douglass and slavery on RTE 1 TV on Monday next at 7:00 pm.