Five years ago tomorrow, the healing in British-Irish relations, kick-started by the Good Friday Agreement, reached another milestone.

Queen Elizabeth's eldest son, Prince Charles, came to visit the place where in 1979, the IRA had assassinated Lord Mountbatten - the person he described as "the grandfather I never had".

Accompanied by his wife, Camilla, the next in line to the British throne went to Classiebawn Castle and then to the harbour in Mullaghmore, Co Sligo, where on that August Bank Holiday afternoon, 36 years before, the bodies of the four people fatally injured in the explosion were brought ashore.

During that day in Sligo, Prince Charles referred to the speech made by his mother in May 2011 when she stood alongside President Mary Mc Aleese at Dublin Castle and said "with the benefit of historical hindsight, we can all see things, which we would wish had been done differently or not at all".

He made his own contribution to the growing body of sentiment, suggesting the bond between neighbouring islands was in a new and positive space.

"Recent years have shown us, though, that healing is possible even when the heartache continues."

Exactly a week later, his mother delivered her Queen's Speech to mark the State Opening of Parliament.?

Her presence was necessary in Westminster because of the unexpected general election victory earlier that month of David Cameron’s Conservative party, complete with a small overall majority and a first outright win for 23 years.

It seemed as if the foundation of all that we held dear in life had been torn apart irreparably.

"Alongside this, early legislation will be introduced to provide for an in-out referendum on membership of the European Union for the benefit of all member states."

In the space of those seven May days, now five years ago, British-Irish relations veered off course and took an untravelled road towards an unknown destination.

The Charles and Camilla visit started on 19 May when they flew into Shannon Airport.?

Sinn Féin’s then president, Gerry Adams, was among those to meet them at NUI Galway.? There was a very public shaking of hands, captured by the cameras. Then they had a private meeting after which Mr Adams said he had told the Prince in Irish and in English that he was glad he was back on the island of Ireland.

He said he told Prince Charles that the visit could be built upon. He said they also spoke about the loss of family members.

But Sligo was the centrepiece of the journey because it was here that Republicans had deliberately caused the deepest hurt to Britain's royal family in the history of The Troubles.

At Sligo's Model Arts Centre, Prince Charles referred to the Mullaghmore bombing and said "it seemed as if the foundation of all that we held dear in life had been torn apart irreparably".

He also said: "Through this dreadful experience, though, I now understand in a profound way the agonies borne by so so many others in these islands of whatever faith, denomination or political tradition."

In an audience that included the then minister for foreign affairs, Charlie Flanagan, Prince Charles spoke about British-Irish relations.

"Our current blessed era of friendship and co-operation is not, however, founded on pretending that the past did not happen. We all have regrets.

"As my mother said in Dublin Castle with the benefit of historical hindsight, we can all see things, which we would wish had been done differently or not at all.

"I am only too deeply aware of the long history of suffering which Ireland has endured, not just in recent decades but over the course of its history.

"It is a history which, I know, has caused much pain and much resentment in a world of imperfect human beings where it is always too easy to over-generalise and to attribute blame.

"At the end of the day, however, we should never forget that our acquaintance has been long: and we can turn that knowing into something new and creative. We need no longer be victims of our difficult history with each other." 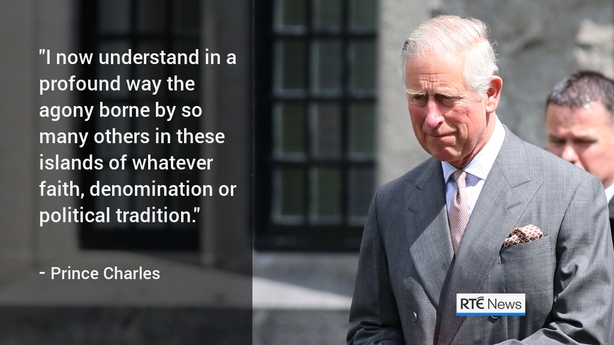 And then the visitors set off to attend a series of functions that would lead them to Mullaghmore.?

Classiebawn Castle was the holiday home used by the Mountbatten family for decades.?

When they sold it to Fermanagh-born businessman Hugh Tunney, the agreement included an understanding that the annual summer visits could continue.

Lord Mountbatten’s 14-year-old grandson, Nicholas Knatchbull, was among those fatally injured in the bombing.

The other victims were the boy’s paternal grandmother, Lady Doreen Braebourne, and Paul Maxwell, a 15-year-old boy from Co Fermanagh who helped out the small fishing boat, Shadow V.

They spoke with some of those who had tried to help the injured and the dying on the day.

The line of cars pulled up outside the castle.

Caroline Devine, the only full-time resident of Classiebawn since the death of Hugh Tunney, had absented herself to allow the visitors their space.

Accompanied by his wife, Isabella, Tim Knatchbull had travelled from London to accompany the royal visitors. In 1979 he had been on board the fishing boat and seriously injured but he survived the bomb attack that killed his twin brother, Nicholas.

The four spent almost an hour inside the place where Lord Mountbatten had spent the final night of his life. And then they stepped into the public arena again.

In Mullaghmore they met people who had worked in Classiebawn and others including retired Detective Garda Kevin Henry, who had accompanied the Mountbatten party from the castle to the boat. They spoke with some of those who had tried to help the injured and the dying on the day.

One IRA member, Thomas McMahon, was convicted for his role in the Mullaghmore bombing and was serving a prison sentence for the crime until he was released as part of the Good Friday Agreement.??

The IRA doesn't keep archives of its decision making process or actions. Such incriminating information is now available for perusal after 30 or 50-year deadlines.?

But as the sun set on Mullaghmore harbour that May evening, five years ago, there was a real sense that another stage in the reconciliation journey had been reached.

Brexit has not shattered that sense of a new beginning. But it most certainly has complicated it.

Boris Johnson was still Mayor of London when the Charles and Camilla came to Mullaghmore.? He had resigned from his role as MP for Henley when he was first elected London Mayor in 2008.?

Politics is such an attritional trade.?Brexit makes it all the more challenging.

He returned to the House of Commons in that early May 2015 election, conscious that his second four-year term as Mayor was coming to an end.

With the exception of the Fianna Fáil role, today there is a new face in all positions.

Politics is such an attritional trade.?

Brexit makes it all the more challenging.

Tomorrow, on the anniversary of the historic visit by Prince Charles to Mullaghmore, the British government will give further details of how it proposes to implement the Northern Ireland protocol element of its Brexit deal with the EU.

There was a calmness in North/South and British/Irish relations when Prince Charles visited half a decade ago.

It has been replaced by uncertainty.

Remembering Mullaghmore,  Tommie Gorman's documentary first shown in 2015, will be broadcast on the RTE News Now and RTÉ Player on Wednesday from 7pm.