The move was spearheaded by Monsignor Paul Tighe, who was secretary of the Pontifical Council for Social Communication at that time.

Ordained in 2016, Bishop Tighe, who is a native of Co Meath, could see the benefit of the Pope using Twitter to reach out to people.

The account now has one of the biggest followings in the World.

The Catholic Church is not alone in its use of social media.

Wariness of church leaders towards social media and the internet appears to have dissolved over time.

Those who have embraced communication online are seeing its benefit in the current pandemic.

The physical limitations imposed by Covid-19 have meant that religions and faiths have had to adapt.

Holy week for Christian religions and the Passover for the Jewish religion are significant communal events.

Both coincided this week and the two religions have had to alter the means by which they celebrate with their communities.

The Government has taken note of how the Covid-19 restrictions have affected most faiths.

The Taoiseach hosted a video conference call with representatives of various religions in Ireland this week.

It was held on the day that the Passover began for 2,000 members of the Jewish community here. 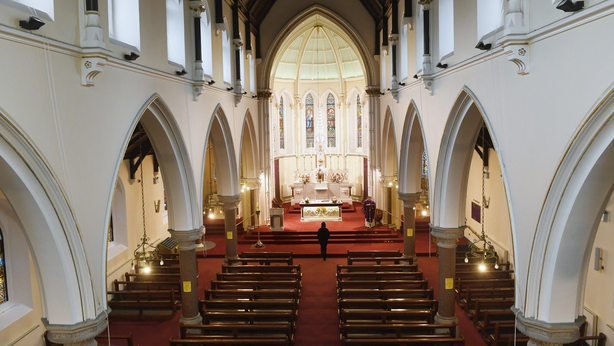 This week also saw the Catholic Archbishop of Dublin Diarmuid Martin’s 75th birthday on Wednesday 8 April, a birthday he shares with Buddha, which is celebrated by 10,000 Buddhists in Ireland.

A Government spokesperson said the meeting was "an opportunity to share experiences on how the religious communities are reaching out to support their communities".

While some may argue that the inter-faith meeting was simply a talking shop, there are benefits to continued communications between Government and church leaders as the restrictions continue.

The most vulnerable in society who are finding the current circumstances difficult could find continued restrictions testing.

Therefore, community support is necessary, be it through religious leaders, voluntary and charity organisations or public representatives.

Radio, television and the internet have facilitated the airing of masses for Holy Week.

More Christian religions have embraced internet streaming as initial technical teething problems have been ironed out.

Among the services that will be streamed over the weekend will be Easter Sunday service from Christchurch Cathedral.

It will be attended by just three people – the Archbishop Reverend Michael Jackson, the Dean of the Cathedral, the Very Rev Dermot Dunne and the Dean’s Vicar.

There will be no choir.

Restrictions in numbers also mean it is unlikely that Christchurch will join other Christian denominations in ringing its bells on Sunday.

There’s no automated service at the cathedral, which means its infamous bell ringers are required, but it’s an activity that does not lend itself to social distancing.

Bell ringing will take place across the country at midday.

It follows an invitation to Christian congregations from the Catholic Archbishop of Armagh to sound their church bells as a sign of solidarity and hope.

Archbishop Eamon Martin says they should ring out as a call to joy, despite the difficult times that people are going through.

A similar invitation was made on St Patrick's Day, when people used the novelty of cancelled parades to create videos of their own at home.

Since then the virtual world become a bigger part of people's lives.

Keep an eye out for the Easter bells hashtags on Sunday. They may even result it a few TikTok creations.

Religious services on RTÉ over the Easter Weekend

Traditionally, Sikh communities become a sea of celebratory orange for Vaisakhi, the festival that celebrates the formation of the Khalsa – a cadre of warriors committed to peace, justice and the protection of others – in the Punjab, in 1699. This year, though, festivities will be muted, as Sikhs in Ireland and worldwide turn their attention to fighting COVID-19, through prayer, care, medicine, hygiene and meditation.

Bishop Tom Deenihan celebrates the resurrection of Christ, with a vigil Mass in the Cathedral of Christ the King, Mullingar. Beginning with the lighting of the Paschal candle, the liturgy, which signifies the triumph of light over darkness and of life over death, may have particular poignancy in the current COVID-19 pandemic. (RTÉ Two & RTÉ Radio 1 Extra/LW252)

A Eurovision Mass, previously planned for Metz Cathedral, takes place instead in the Dominican Convent of St Jacques (St James the Great) in Paris, due to France's COVID-related restrictions on indoor gatherings. Translation and commentary are by Fr Thomas McCarthy OP. (RTÉ One & RTÉ Radio 1 Extra)

Pope Francis’ Easter Message. Pope Francis has cancelled the big public liturgies that usually take place at Easter in the Colisseum, St Peter’s Basilica and St Peter’s Square. However, he will still deliver his usual Easter blessing to the city and the world and a message of prayer and encouragement by video link from within the Vatican. Translation and commentary by Fr Thomas McCarthy OP.